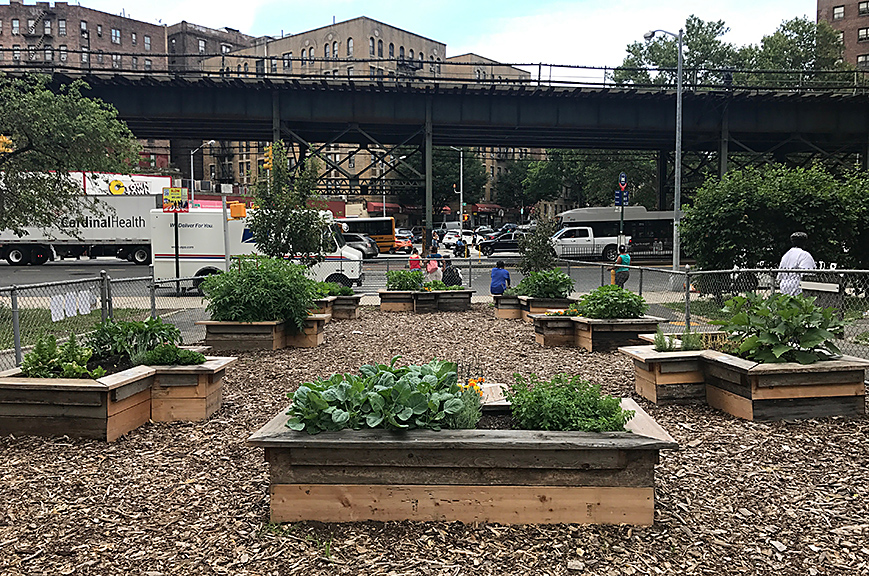 Juanli Carrión’s most recent iteration of his Outer Seed Shadow project (OSS#MH) was installed in the Marble Hill neighborhood in the Bronx, New York City in the spring of 2017. It is an ongoing project intended as a permanent fixture at the Marble Hill Houses community, but it will continue to grow, quite literally.

The Outer Seed Shadow (OSS) projects are public art interventions in the form of “geopolitical gardens” which map and visualize plant and human interaction by transforming specific conflicts into tools for community building. For Marble Hill, the intervention has taken the form of a community garden, but with additional layers of meaning around health and cultural identity as they relate to food.

Carrión grew up in regional Spain in a farming and wine growing county. As he describes it, it was a fairly “monocultural” community of white southern Europeans. It was also a location where members of the community knew one another, and everyone was connected. The butcher and the baker were essential community members; no one was a faceless stranger. When he moved to New York City he struggled to find ways to participate directly in his communities. What did he have in common with his neighbors in Chinatown? What was his relationship to his Hassidic and Dominican neighbors when he moved to South Williamsburg? Eventually settling in Carroll Gardens, he realized that he was back living in a predominantly white European neighborhood, but still struggled to come to terms with a sense of community. What was his community and how could he participate, interact, and contribute to it?

As an artist, Carrión’s early works were already exploring the idea of landscapes, identity, and community. Increasingly his work became more interactive, and gradually also participatory in nature. While exploring his own identity as he navigated New York, he started to think about communities as ecosystems, and his role and our role as plants in those ecosystems, and thus the idea of OSS was born. As he states on the OSS website: “In plant migration, the outer seed shadow is the region where there exists an influx of seeds from a species’ reproductive core, but where—due to adverse conditions— seed germination and seedling reproduction are complicated, causing a decrease of those species’ representatives in this region.” In other words, while the outer seed shadow is present, it never usurps the original plant diversity of a location, but grows alongside it, on the periphery, or edge of the landscape. The plants become one with the landscape, but not as an invasive species, more as new interlopers, or minorities. And so Carrión began to use this concept to map ideas onto the great American tradition (myth) of the melting pot. 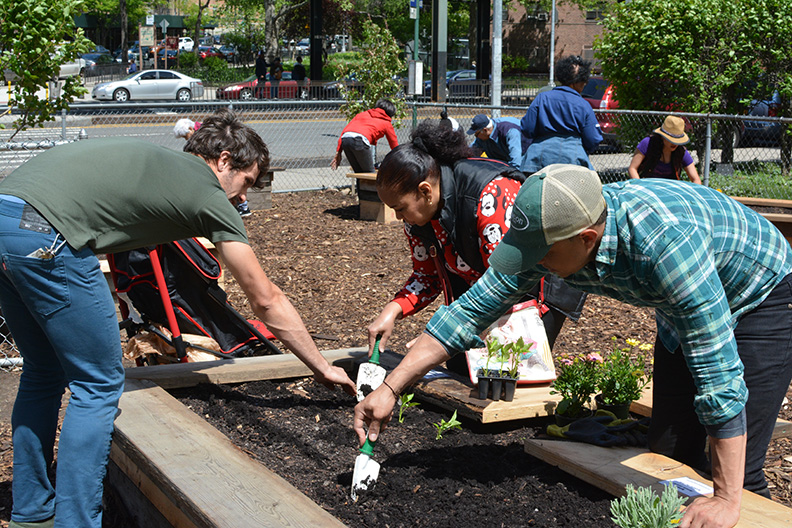 Each iteration of OSS is variable, but in each instance, the artist’s intent and the outcomes are the result of a deeply collaborative process. And in each iteration, Carrión undertakes significant hyper-local community consultation that leads to thematic concerns for each garden: health, community organizing, immigration, refugees, cultural appropriation.

Carrión was introduced to the Marble Hill community through a consultation he was doing with City as a Living Lab in late 2015. The Marble Hill Garden Project, led by founding member and project manager Jacki Fisher, was in search of ideas to promote participation in among Marble Hill House residents. This initial meeting led to a year-long consultation process, conducted with local groups but just as importantly through door-to-door individual consultation and conversation. As a relative “outsider” Carrión found that he was able to act as a mediator and facilitator for these conversations, which then led to a deeply collaborative and participatory design process. Health and cultural identity emerged as themes with great import in the community. A community garden had been build at Marble Hill, but it was underutilized. By inviting local community members to also be part of the design-build process, simple changes were made. The beds that existed were deconstructed and then rebuilt using the same materials but with simple changes: garden beds edges became seating; the layout reflected the multicultural nature of the community; and specific members of the community chose plants that reflected their own cultural heritage, with signage that assigned individual members of the community to the plants they seeded and grew. And the eleven new beds represented the eleven towers that make up the Marble Hill complex.

And so, after months of conversation, building, and planting, the location became renewed in Spring 2017. Over the summer, OSS#HM then began to serve the community as a platform for diverse and inclusive public programming. It is this essential component of OSS#MH that transforms a community garden simultaneously into a public artwork, a community engagement project, and a source of food and great pride to his local collaborators. The garden becomes an illustration of the social ecosystem of the community with whom Carrión works. 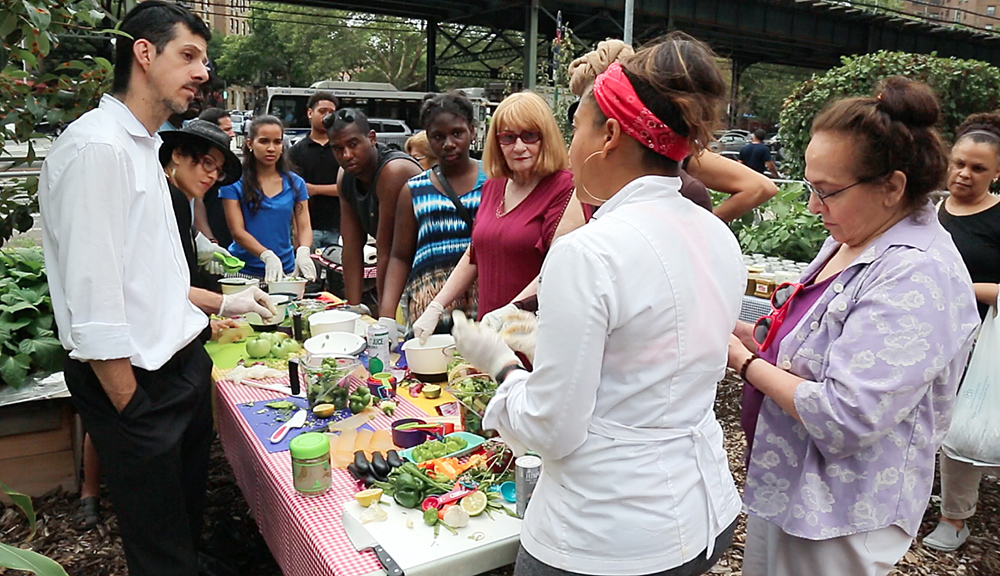 Food is essential to our nourishment: socially, culturally, and quite literally, as sustenance. Food is also a growing topic of concern, as we have come to the realization that contemporary food production is quickly becoming unsustainable – environmentally, economically, and culturally. Contemporary conversations around food tend to either focus on food justice issues, or on designer-sexy aspects of the new food movement. Where Carrión’s work diverges from either of these polar opposites is that he centers the conversation around culture in poetic as well as pragmatic ways. The artist’s intent is key to a discussion of the roles that various members of the community play in the production, presentation, and preservation of a contemporary art installation. Carrión’s collaborative approach also allows for a process that encourages and supports research and the development of new local knowledge.

Whether participants understand Carrión’s OSS#MH as an art project, a garden, a green space, or a place to grow food and build community matters less than the overall outcome of building sustainable communities through culture. 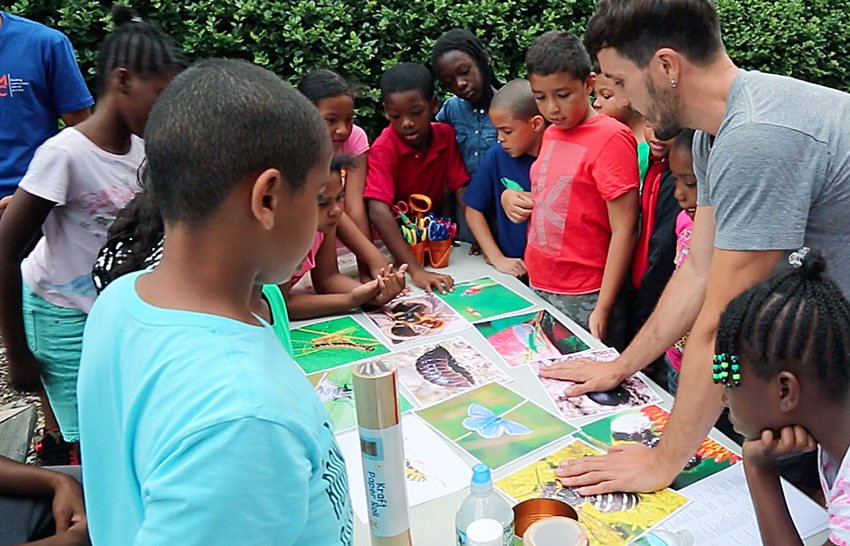 And indeed Carrion is not the only artist working at the intersection of art, urban agriculture, culture, and community building in the Bronx (or elsewhere in the city). Mary Mattingly’s Swale, a public artwork and floating food forest currently docked on the Bronx River is working with the Parks Department, and local south Bronx organizations such as Youth Ministries for Peace and Justice, the Bronx River Alliance, and The Point CDC to agitate for public food in public parks. At The Laundromat Project‘s Kelly Street location in the Longwood neighborhood of the Bronx, several of their artists have worked in tandem with the Kelly Street Garden, which sits adjacent to the artists’ studio space that LP program on Kelly Street.

These art projects specifically explore and develop opportunities for contemporary art to act as a motivator, facilitator, and platform for educational programs, cooking classes, performances, art, and engagement. They are projects where art is embedded into culture, reflecting the issues and concerns of our times, and embodying the needs and desires of the neighborhoods in which they are located.

END_OF_DOCUMENT_TOKEN_TO_BE_REPLACED

[…] I recently contributed an article about Juanli Carrión’s most recent iteration of his Outer Seed Shadow project (OSS#MH) to Voices in Contemporary Art, VoCA. […]