This week’s contributing blogger, Elena Girelli, is project manager at Studio Daniel González, NY & Verona, Italy. She oversees the project planning and development of large-scale public artworks, performances and shows of the studio. She received a masters degree in arts management at University of Bologna, which was then followed by a four-year term collaboration with Peter Brook touring activity in Europe. 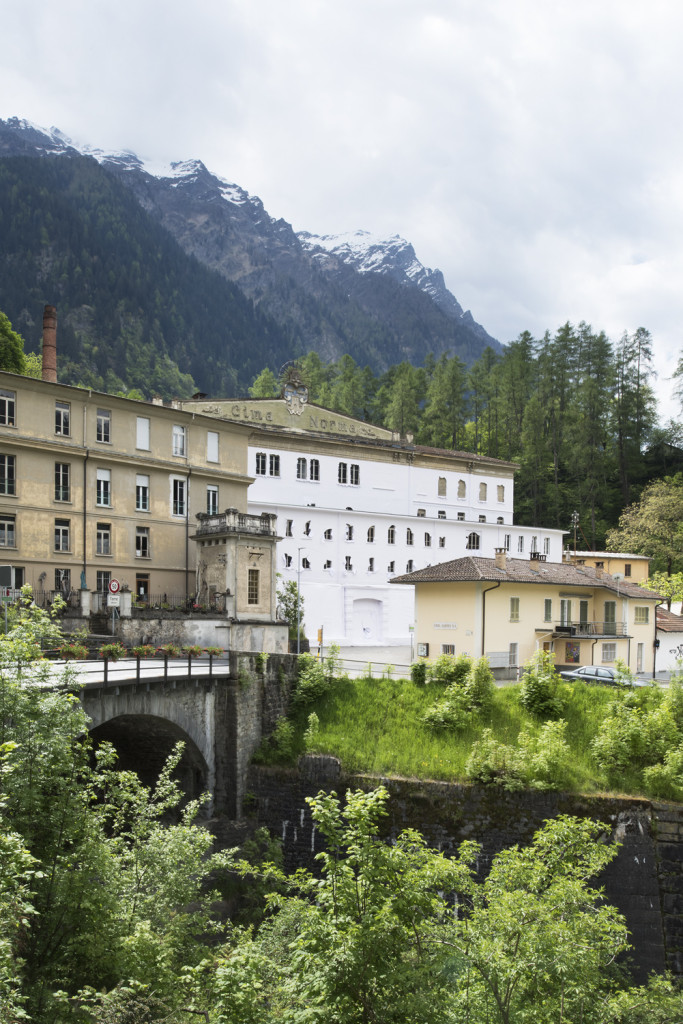 The Argentine artist Daniel González was invited to realize and present Paper Building, a site-specific, ephemeral architecture to launch the philanthropic Swiss Chocolate Factory Foundation (Tessin, CH) in May of 2016. After almost 30 years of closure due to lack of competition on a global scale, the former chocolate factory Cima Norma is now redefining its future path as cultural institution.

Paper Building is a large-scale intervention on the façade of the former chocolate factory created by applying white billboard paper over the entire 890 square meters of the external surface; it annuls the history of the industrial architecture to reveal a new identity through the paper interruptions at each door and window. Paper Building highlights the echoes and past melancholy associated with the background of the former chocolate factory, but also acts as a reset button, taking the history of the architecture back to zero and becoming a starting point for a new identity to be defined.

When faced with drastic change, a building, person, or community may struggle to maintain its own identity, having been forced to adapt to the new circumstances. In this way, hiding the façade of the chocolate factory from public view challenged the village citizens to let go of an important point of reference in the territory. By physically erasing the original context of the factory, the artist renewed the architecture’s emotional potency.

Daniel González makes large-scale public works that act as social catalysts for bringing people together. This particular project involved the local community beginning with its first steps, from the local Civic Protection Forces to persons who had a direct relationship of some kind with the old factory (parents or relatives working there in the past decades). This meant long hours of discussion, chatting with the townsfolk in order to understand how many different stories the building witnessed and how the citizens’ lives were influenced by the factory when it was in business, including the working hours’ alarms that resounded throughout the whole valley.

To quote the artist: “An ephemeral building allows a radical alteration of architectural structures and so influences our experiences through an object, one that is linked to a specific time limit, after which there remains a record of it and, above all, the fact experienced”. With the use of white paper in Paper Building, the artist created a space for a double interpretation of the material: on the one hand the reset of the history of the former Cima Norma factory’s architecture and, on the other, the infinite possibilities of its new identity in the future. For the citizens and those who experienced it, Paper Building represents the freedom to interpret the architecture of the former factory through one’s own intimate and personal experience: a catalyst for the creation of a relationship between the architectural space and the visitor. 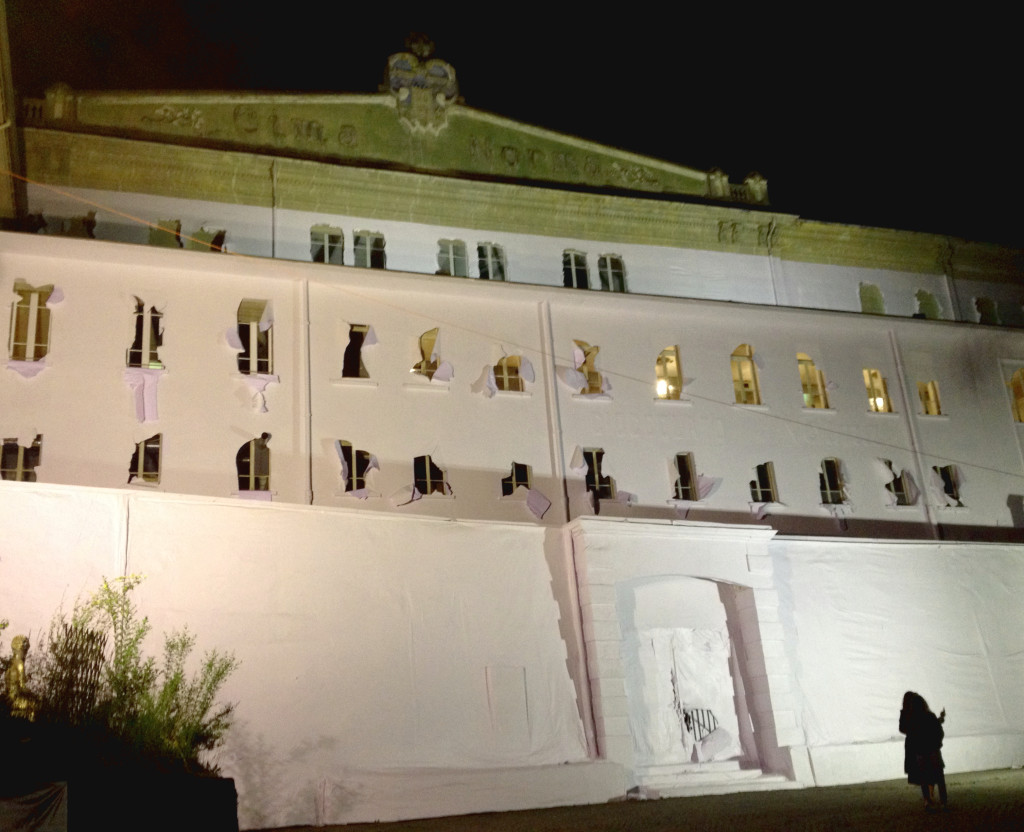 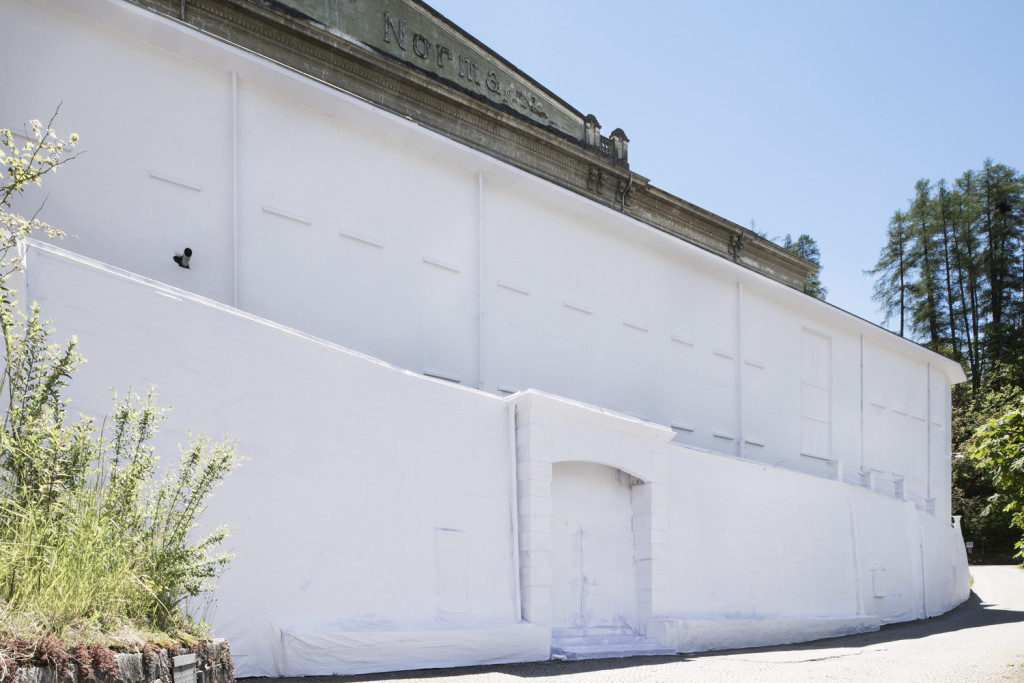 With a direct reference to Martin Heidegger’s concept of non-concealment (Unverborgenheit)[i], the artist covered up in order to discover: by complete covering the façade, it is stripped back to the outline of the architecture itself. Here, the act of applying the white billboard paper could be understood as “adding”, but the true significance lies in what is being taken away. On the day of the inauguration, Paper Building brought together the people who lived and live in the surrounding area and descendants of former factory workers. They were invited to forcefully smash its doors and windows as an act of violent catharsis: this gesture became a symbol of the change, an act of revelation, creating a future in the present by tearing it from history.

Being a symbol of change, Paper Building also triggered a new beginning from a more practical point of view. The white billboard paper layers were glued to the walls with a self-polishing water-based glue. As a result, in the act of detaching the ephemeral architecture, the walls’ surface was cleaned of moss, dust, and pollution, leaving it ready for a major restoration as scheduled by the philanthropic Foundation at the beginning of its new life.

Daniel González was born in Argentina in 1963, lives and works between New York and Verona, Italy. His work is focused on the rite of celebration and breaking down boundaries between categories; it takes the form of hand-sewn sequined banner-paintings on canvas, performances and large-scale public projects, or “ephemeral architectures” inspired by Baroque machines by Bernini. González creates highly evocative, irrational worlds, areas of freedom in which existing conventions collapse.

[i] Joseph J. Kockelmans, “Heidegger On Time and Being”, in “Martin Heidegger: Critical Assessments” curated by Christopher Macann, vol.1, Routledge, 1992

END_OF_DOCUMENT_TOKEN_TO_BE_REPLACED

[…] context and involve the community. (For more information about González’s other projects, see my last post for the VoCA blog from March […]

[…] Daniel González’s research into community-based installations. Over time, the artist’s “ephemeral architectures” have evolved into a deep investigation about audience engagement. His upcoming public project, […]