This week’s returning writer, Elena Girelli, is project manager at Studio Daniel González, NY & Verona, Italy. She oversees the project planning and development of large-scale public artworks, performances, and shows of the studio. She received a masters degree in arts management at University of Bologna, which was then followed by a four-year term collaboration with Peter Brook touring activity in Europe.

Last fall, Argentina-born and US-based artist Daniel González was invited by the local association Made in Lambrate to create a site-specific public installation for the urban Milanese-neighborhood, re-writing its topography by mocking social-networks’ language and stimulating the imagination of residents and passers-by. Lambrate is mostly known for its vivid activity during Milan design week, which takes place every year in April. The collection of streets turns itself into a lively area devoted to designers and creative industries exhibiting works of art, design, and avant-garde creativity. With the help of a multifaceted artist like González, the association Made in Lambrate worked to strengthen the community feeling among residents and institutions living the neighborhood throughout the year. As the artist himself has said: “Every time I am faced with a work of architecture or a space, I have to consider the needs, the functions and the story of that place.”[1] 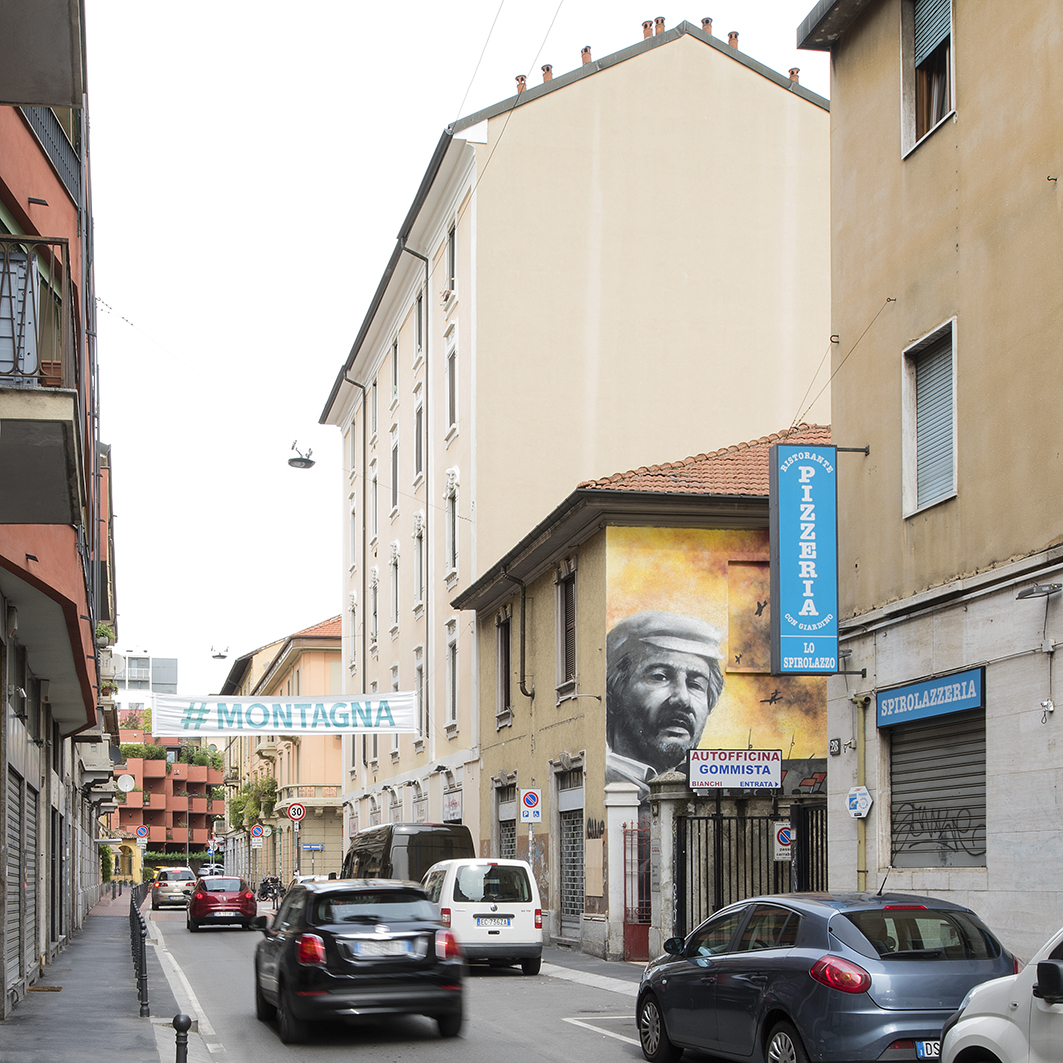 “Imaginary Country” is part of Daniel González’s research in ephemeral architectures. These projects aim at changing the semantic value of the space or architecture for which they have been conceived. These ephemeral architectures are tools for celebration which, like fairy tales, influence the urban context and involve the community. (For more information about González’s other projects, see my last post for the VoCA blog from March 2017.)

For this commission, González went back to the tradition of “pasacalles,” an Argentinean system for private communications along public roads via hand painted banners. The “pasacalles” are a popular tradition for people who wish to share personal news publicly, with content ranging from family congratulations to celebrations for having gained a diploma or the return home of a loved person; private statements, birthdays, and anniversaries, political statements, invitations to parties, and searches for lost objects or animals. They are widely considered to be the forebears of posts on social networks.

González’s “pasacalles” depict an imaginary landscape overlapping the real urban environment: suddenly #square (#piazza), #sea (#mare), #stargate, and #mountain (#montagna) stand out against the residential buildings. Moreover, the artist combines these captions with the hashtag symbol, #, which links us back to our habit of using social networks. In “Imaginary Country,” the post is analogical and consists of a banner that stands out against a real panorama, while photographs taken with the naked eye are returned to the digital dimension. Pairing the panorama with the hashtag has the power to determine authentic truth on the social networks, even if it does not correspond to the truth itself. It leads the passers-by to imagine the content indicated by the captions and to change the topography of the neighborhood.

This very simple graphic asks all passers-by to look-up and imagine that a real mountain (#montagna) exists in place of skyscrapers on Conte Rosso street, for example, or that a real sea (#mare) swirls in Ventura street. González is also providing an easy way out for those who might want to live somewhere else, such as with the #stargate banner in Oslavia street, near the highway entrance. The ephemeral installation is subtle, too, inviting residents to visualize a real Roman street (#stradaromana) instead of the contemporary blacktop in Conte Rosso. The artist is making reference to the discovery of ancient Roman relics found in the neighborhood, which unlikely will be ever visible in the contemporary urban environment. This impossible reality becomes possible thanks to the semantic couplet of panorama/#. 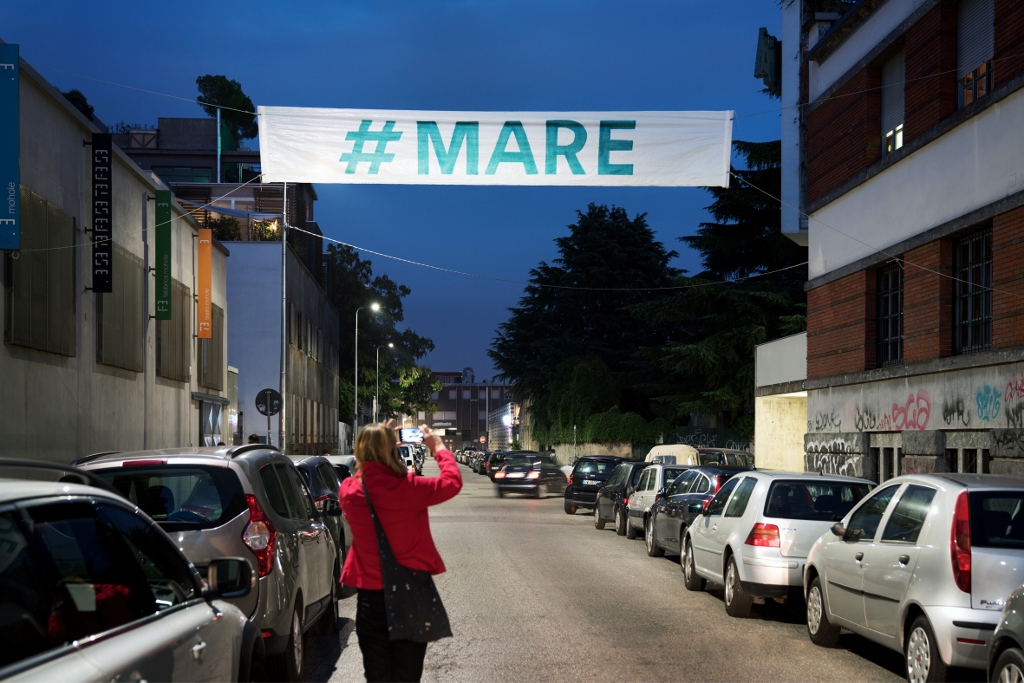 When searching for press about this project, I noticed it was natural for visitors to take photos or selfies and post them immediately on their social network profiles. With this action, “Imaginary Country” returns to the virtual dimension it originally stems from. But there have been moments where the virtual seeped into real life as well. Here is the direct experience from gallerist Francesca Minini, living and working in that borough: “I was strolling around with my five-year-old child and he started practicing the reading, spelling out the words: M – A– R – E.” The architectural photographer Carola Merello recounts: “I was visiting my brother living near Conte Rosso street and suddenly I heard his daughters playing and yelling. They were actually battling with the #words that they saw minutes before, walking around the Lambrate design district, screaming #MARE #PIAZZA #MONTAGNA.”

To quote the artist:

Talking with people living there after the opening, I realized that “Imaginary Country” made them experience those streets in a different way. As if suddenly, someone from outside made them see something unusual in the streets they walk every day, and see differently the panorama they got used to in their daily routine. From children to adults, everyone living the area is proud to live in the only Milanese-neighborhood with a double geography: the official one and the virtual one in the real space.

The project was deeply felt by everyone with a direct contact with this neighborhood, the Municipality first of all. It was specifically designed for them and therefore strengthened their feeling of belonging to the same community. Another example of how deeply the project has impacted the community can be seen in the Viale delle Rimembranze di Lambrate: on September 23, 2017, just weeks after the artist positioned the #piazza banner above the area, that part of the neighborhood was officially renamed as a public square. 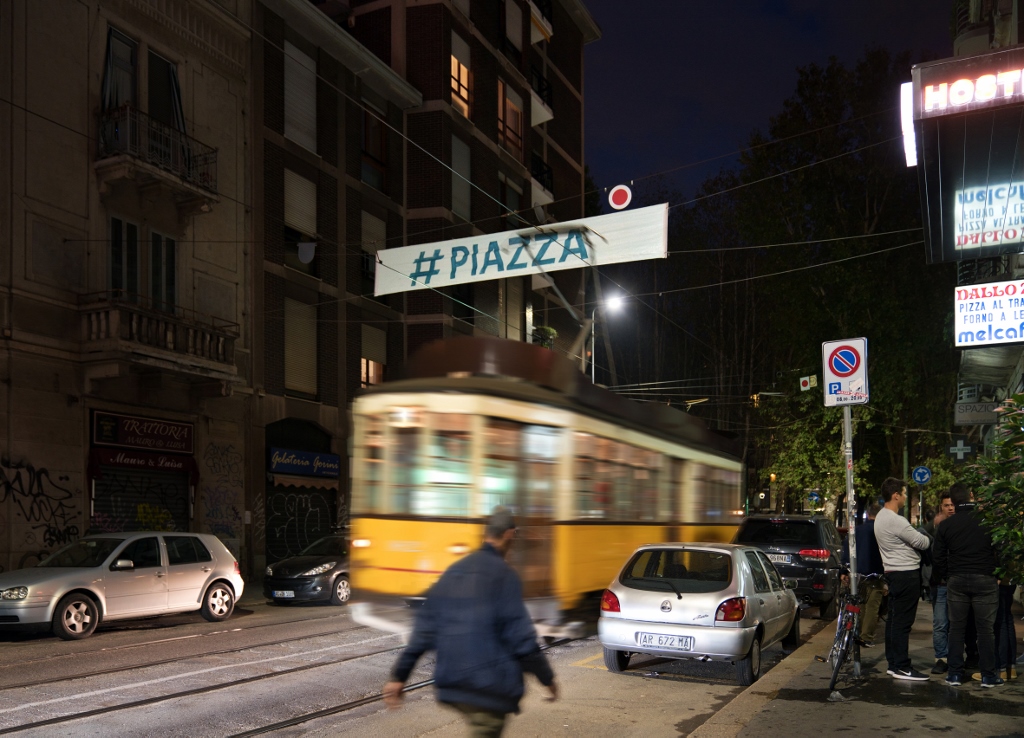 The extension of the installation (now up until May 31st, 2018) upon direct request of the Municipality shows how these contemporary structures catalyze new thoughts, reflections, and values about the concept of the community, belonging, and social sharing to generate emotions and activate new interpersonal relationships. Now and then, new banners are integrated into the installation as a result of meetings with various groups of people living there or experiencing the area for job, free time activities, or personal reasons. The artist is meeting students from local first and second grade school (from six to twelve years old) in March in order to let a new subconscious imaginary vision of the neighborhood arise and be the concept for the creation of a new banner. After that, the memory of this project will be living in its virtual dimension thanks to the hashtag tracking on social networks. In reality, “Imaginary Country” is meant to be the just the beginning, enabling the association Made in Lambrate, which commissioned the project, to set up a series of creative workshops with families to imagine the future of their neighborhood in spring 2018.

Imaginary Country is on view from September 19th, 2017 until May 31st, 2018, and is presented with support from supported by Municipio 3 – City of Milan. Sponsored by Logotel, Marsèlleria Permanent Exhibition and ExBazzi. Follow the project #Lambrate365 #ImaginaryCountry #DanielGonzález #publicart. For more information, go to http://daniel-gonzalez.com/portfolio-items/imaginary-country-made-in-lambrate-milano-lambrate-2017/?portfolioID=306

[1] interview with Daniel González, The artist who created the Paper Building, Shaping Beauty, May, 2016.