This week’s contributing author, Tyler Hardy, is an undergraduate student at Northeastern University in Boston, Massachusetts pursuing a BS in Behavioral Neuroscience.

American artist Kerry Tribe, best known for her film and video projects which often act as inquiries into life sciences and medicine, memory, language, and consciousness, has described her work as “documentary adjacent”.1 Tribe’s work can be conceived of as adjacent to documentaries because she uses it to magnify the voices of her subjects and transcend the beaten path of talking heads to a more abstract, yet nuanced, plane. In her cinematic three-channel video installation The Aphasia Poetry Club, which was first presented as a part of The Loste Note exhibition at 356 Mission, Los Angeles in 2015, Tribe interviews three aphasic individuals: Laura Romero, Chris Riley, and Dale Benson. Aphasia is a neurological condition characterized by varying levels of dysfunction in the ability to produce and understand language, oftentimes leaving the intellect and personality of the person untouched.2 This disorder makes it difficult for aphasics to communicate their thoughts and express themselves.

This is where Tribe steps in.

The Aphasia Poetry Club is not a typical interview. In fact, at no point does the audience see Romero, Riley, or Benson. Rather, Tribe plays the audio from the interviews while a combination of live footage, still photos, and animated sequences play in the three-channel cinematic video. The separate channels of the installation act independently, only occasionally working together to form a cohesive image. More often the channels experience delays, rotations, or even entirely different clips to form elaborate and almost chaotic arrangements. The breaks in synchronicity are seemingly timed to the interviewee’s missteps in language. It is in these visual discrepancies that the power of empathy in Tribe’s work shines through. The Aphasia Poetry Club communicates the experience of aphasia verbally and visually. 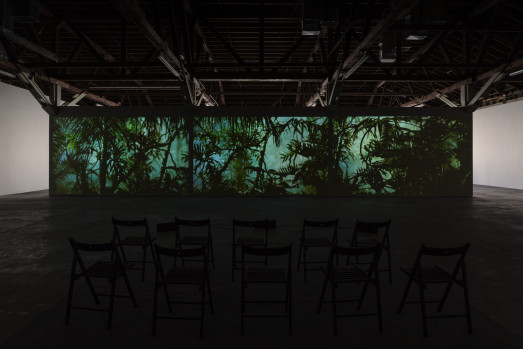 “I’m an aphasic, and you’re an artist,” Romero says, “but we have a commonality of trying to express ourselves.” While Romero and other aphasics struggle in expressing themselves in nearly all interactions they have, artists seem to face a similar challenge with their work. “At least for me… that’s why we entrust you, to use you through it,” Romero goes on to say. In a standard interview, it would be difficult to communicate this experience of aphasia. Through the addition of the visual arrangements, Tribe compounds the emotional salience and allows the audience a glimpse at a novel representation of such an enigmatic disorder.3

This type of visual representation of mental disorders is also evident in her 2009 video work, H.M. Henry Molaison, the namesake of the work, developed severe amnesia and inability to form new long-term memories following a surgery to treat his debilitating epilepsy. He was limited to thoughts within his working memory, which lasts about 20 seconds. H.M. is a two-channel video, appearing almost as a documentary describing Molaison’s surgery. The two channels display the same film strip, but there is a 20 second delay between the two channels, representing the length of time that Molaison retains new memories. Viewing the piece elicits feelings of confusion, unease, and even déjà vu, poignantly communicating Molaison’s state visually and formally.4 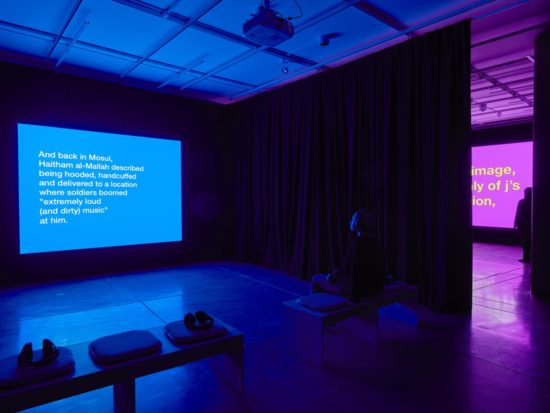 While Tribe uses a disconnection from the voice of her subject to paradoxically increase their voice, other artists, such as Tony Cokes, use it as a method of diversion, even irony. In an interview with Cokes published on the occasion of Cokes’s recent exhibition If UR Reading This It’s 2 Late: Vol. 2 at the Carpenter Center for Visual Art, Tribe talks about how the voice in Cokes’s work can feel “untethered from its source,” making it “hard to track where one ‘voice’ ends and another begins.”2 This dissociation from the source is salient and effectively shocks the audience in its new context that Cokes creates. For example, in his video Evil.16(Torture.Musik), Cokes overlays excerpts from Moustafa Bayoumi’s piece “Disco Inferno” with music as innocent as the theme from Barney & Friends.5 “Disco Inferno” describes the use of such songs at deafening volumes as a form of torture and interrogation aid. Tribe similarly untethers the source from the voice in her works, but to a different effect. Rather than appropriating the voice as Cokes does, Tribe empowers it through her visual artifact. By disconnecting her subject’s voice from themselves, and coupling it with her cinematic ‘documentary’ style, the subject’s experience shines through.

Mental disorders such as aphasia and amnesia cannot be fully understood without experiencing them. Even for those who experience it, expressing their experience verbally is virtually impossible. One can learn about the neurological underpinnings of the disorders, ie. aphasia can be caused by damage to Wernicke’s and Broca’s areas, areas of the brain that are responsible for understanding language and producing it, respectively. But what does this do for the audience’s appreciation of an experience that is so unimaginable? It does almost nothing, which is why Kerry Tribe’s work is so important. H.M. and The Aphasia Poetry Club show how abstract visual representation can communicate more about an experience than words ever could.

A complete description of H.M. and excerpts from the piece can be found on Tribe’s website.

END_OF_DOCUMENT_TOKEN_TO_BE_REPLACED

[…] cognizance and recollection, broadening her previous work discussed in the VoCA Blog article “Documentary Adjacent.” The exhibit debuts Tribe’s newest work, Corner Piece (2022), her most personal work in the […]