Gail Vicente is an artist and archivist based in Manila, Philippines. In 2007 she worked as an assistant researcher with Ringo Bunoan for The Chabet Archive project of the Asia Art Archive. She is now working for the non-profit art organization King Kong Art Projects Unlimited (KKAPU) since 2010. Vicente, who recently began her training in paper and painting conservation, initiated the Conservation and Restoration Project at KKAPU in 2017.

MM Yu is an artist based in Manila, Philippines. Since obtaining her degree in Fine Arts from the University of the Philippines in 2001, she has been working in both photography and painting. For many years, she worked closely with her mentor, Roberto Chabet, who his former students, including Yu, affectionately referred to as “Sir.” Yu has been actively documenting the works of Chabet since 2005.

How does one go about archiving the work of a prolific artist whose career spanned more than 50 years and a variety of mediums? This is the challenge confronting the custodians of the Roberto Chabet archive, which was launched in 2009 and later absorbed into King Kong Art Projects Unlimited (KKAPU), a Manila based non-profit art organization established in 2010 by Chabet’s former students Ringo Bunoan, Nilo Ilarde, Mawen Ong, Soler Santos, and MM Yu.

Roberto Chabet was born in Manila in 1937 and grew up in the post-war generation of South-East Asian artists. Chabet was a pioneer and is considered the father of Conceptual Art in the Philippines. His contributions are immeasurable. He was an artist and collaborator; teacher and mentor at the University of the Philippines College of Fine Arts for over thirty years; curator, and founding Museum Director of the Cultural Center of the Philippines (CCP) where he initiated the Thirteen Artist Award, which became a prestigious award given to emerging Filipino artists starting in 1970. Additionally, he was actively involved in artist-run spaces in Manila throughout his career.

Chabet’s work is best known in the Asian-Pacific region. He has exhibited widely in Australia, Singapore, Hong Kong and Manila. In 2015, there was a retrospective of his work at the Mori Art Museum (MAM) in Tokyo, Japan entitled “Who was Roberto Chabet?” as MAM wanted to give Chabet the international recognition he deserved.

In 2007, curator and artist Ringo Bunoan initiated a research and digitization project to archive the life and work of Chabet. Through the support of the Asia Art Archive (AAA) in Hong Kong and the Lopez Memorial Library and Museum in Manila, The Chabet Archive was launched in 2009 and is still ongoing after the artist’s death in 2013. The archive of an artist such as this one is a portal where ideas, stories, and information interconnect.  The archive can be accessed at https://aaa.org.hk/en/collection/search/archive/roberto-chabet-archive. 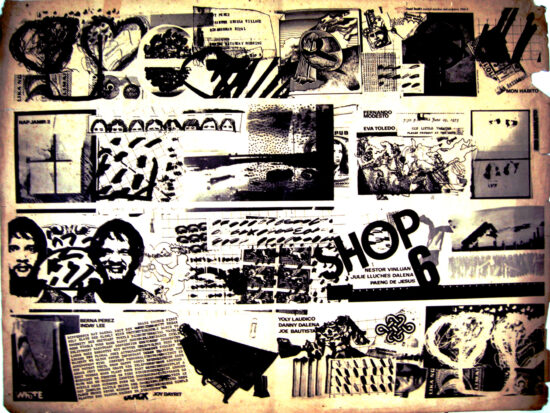 Shop 6 exhibition poster. Courtesy of the Cultural Center of the Philippines and The Chabet Archive.

The Chabet Archive consists of over 7,000 digital objects, compressed into 4,500 records made available online[1] such as photographs, papers, and ephemera. One interesting file housed in the archive materials is from Shop 6[2], a group of conceptual artists that Chabet formed in 1974. Shop 6 was set up to offer artists an alternative space to work freely and experiment. To put this is context, Shop 6 was born during the Martial Law in the Philippines, a time where censorship was imposed by the then dictatorial government under Ferdinand Marcos. The archive reveals Shop 6 in black and white photographs of installations and artworks, a hand-written invitation in pencil on college-ruled white paper, a typed description of Shop 6 by a colleague, and newspaper clippings about the exhibition.  From the 54 Shop 6-related items in the archive, one gets a glimpse of an exciting “year of unprecedented and, to this day, unduplicated frenzy of art production, the only injunction of which was artistic experimentation—essentially the willful exercise of freedom of expression”.[3] 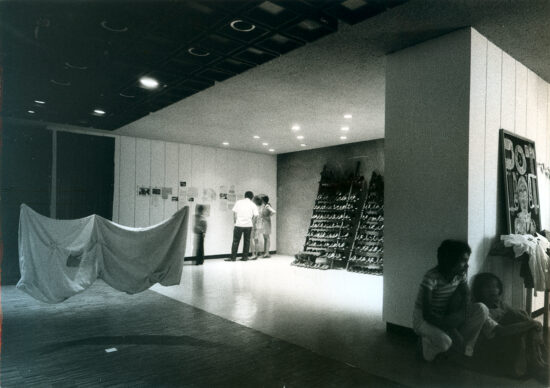 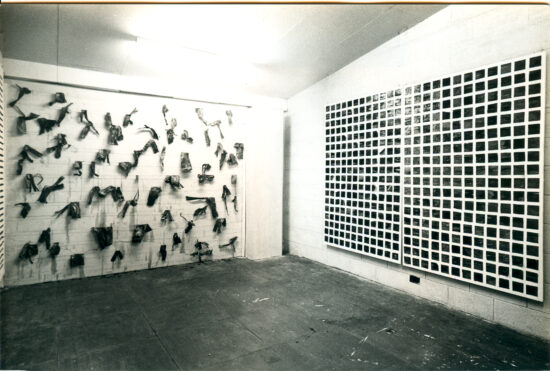 Photograph of Yoli Laudico’s works presented at her solo exhibition in Shop 6, Sining Kamalig, in 1974. Photograph by Yolanda Perez, courtesy of The Chabet Archive.

One of KKAPU’s breakthrough projects was Chabet: 50 Years, a yearlong series of exhibitions held in Singapore, Hong Kong, and Manila throughout 2011 and 2012[4].  Each month, for over a year, 18 curated exhibitions of Chabet’s drawings, collages, paintings, and conceptual installations were shown at these locations. KKAPU recreated a selection of Chabet’s seminal conceptual pieces that highlight his predilection for utilizing everyday objects as subject and form in his artworks. His works used building materials like house paint, plywood, metal sheets, and brackets combined with found objects like books, clocks, clipboards, harmonicas, school desks, and neon lights. In the first exhibit of this series, “To Be Continued”, several of his plywood sculptures were re-created. Because he was trained as an architect, sheets of plywood were a way of measuring space for Chabet, similar to a Japanese artist using tatami mats[5]. As Carina Evangelista writes in Chabet’s retrospective catalog,

“Chabet appointed found objects and assisted readymades not merely to declare specific things art…What he did to, and how he placed, these everyday objects is akin to the muscular orchestration of a few notes and rests in the hands of a minimalist musical composer…Within the banal of the everyday is the banal (in Tagalog, “sacred”).”[6]

Chabet’s use of everyday objects in his installations poses a challenge to their conservation, such as how to capture and archive tacit information about the ways that the pieces were recreated for exhibitions over the years. As Chabet intended for the works to be re-constructible, some components of the works are not replaceable (found objects such as those in Two Paintings I) while other components (e.g. plywood, house paint, brackets) are. There were questions around how to preserve information about the works and how to proceed without formal training in conservation. Case in point: For Pier and Ocean (1996/2010), plywood is bought for each new installation and the wood is painted blue.  The exact color is selected by a longtime collaborator of Chabet, information which has not yet been documented and gathered by archivists but is necessary for these works to be (re)created in future iterations, independent of Chabet’s former collaborator.

In response to these unique challenges, the Asian Cultural Council[7] (ACC) made a grant to King Kong Art Projects Unlimited to support a two-month research trip to the U.S. for the Filipino researchers, Yu and Vicente. ACC connected them with Martha Singer, an independent conservator of modern and contemporary art in the New York area, who developed their mentoring program.

During the summer of 2019, Singer and the ACC arranged for Yu and Vicente to visit institutions and foundations in and around New York City to gain a broader perspective and understanding on the preservation, maintenance, and management of contemporary works of art. The results of Yu and Vicente’s research on contemporary art will be discussed in a second blog post.

[2] The material on Shop 6 consists of 9 albums and 1 folder of Roberto Chabet’s manuscripts. Donated by Joy Dayrit, who was a member of the group, this set was the first ever material donated to The Chabet Archive.

[3] Carina Evangelista, “Chabet’s Objects: The Taxonomy of the Random, the Haphazard, and the Accidental” in Roberto Chabet (Manila, Phillipines: King Kong Projects, Unlimited 2015), 296.

[4] The exhibits were held in collaboration with the Institute of Contemporary Arts, Singapore, the Osage Art Foundation (OAF) in Hong Kong and the Cultural Center of the Philippines as well as other galleries in Manila.

[6] Carina Evangelista, “Chabet’s Objects: The Taxonomy of the Random, the Haphazard, and the Accidental” in What ever happened to Bobby Chabet: (1927-2013) (Manila, Phillipines: King Kong Projects, Unlimited 2015), 313.