There is nothing like the uncertainty and the rush of excitement one feels when facing a project like interviewing an artist. From my experience, facing a new interview is similar to riding a rollercoaster: scary, exhilarating, emotional. Of course, you have to buy your ticket before you ride—you have to go ready, prepared. It also doesn’t matter how well-known the artist is, or how many interviews you’ve done before; there is a distinct joy in being in the presence of an artist, of witnessing the creative process, and getting to know the creative mind. This is how I felt the first time I met the “powerful mujer,” Gladys Triana. 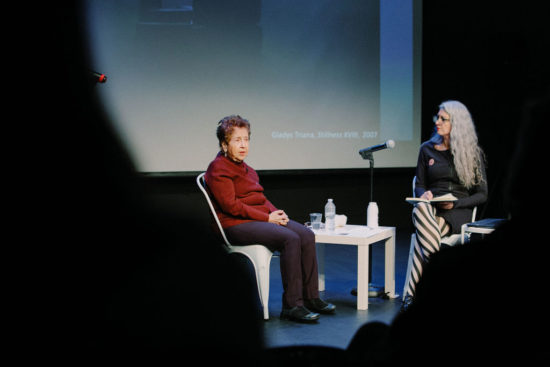 It is September 2019, and I am with my friends and colleagues, Dr. Rita L. Amor and Dr. Annette S. Ortiz walking in the rain in New York City. We have been talking about urban artists and the power of memory, enjoying murals and public art interventions. Sharing knowledge and generating ideas with smart women is a fantastic feeling—a great mindset to have as I meet with Margaret Graham, VoCA’s Program and Communications Manager, who introduces me to Gladys. At first glance, I see a petite woman, talkative, who wants to feed us with delicious food and even warmer hugs. This is the first step in preparing for a new artist interview: the first contact, the first meeting. In this case, it is a real first because I don’t know her, and she doesn’t know me. Ideally, you don’t meet an artist without knowing anything about them, but even so each artist is different, and even different from themselves at different moments. For this reason, it is essential to listen, observe, and flow. 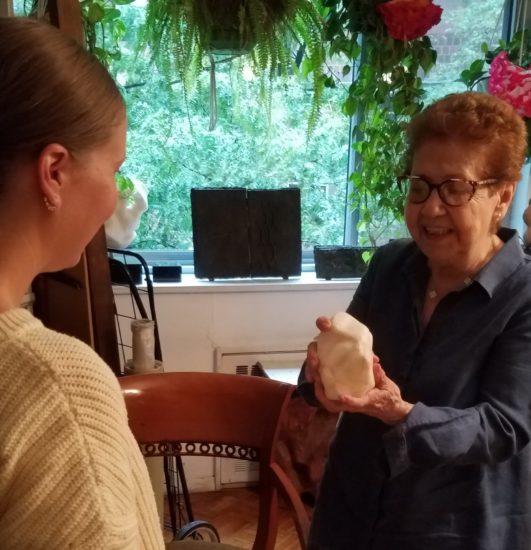 Gladys Triana is a Cuban-American artist born in Camagüey, Cuba, in 1937[1] and reborn several times after—as she points out, in Spain, Italy, and the United States, specifically, in 1975 when she moved to New York. Because there was no art school in Bayamo, where she had resided since 1940, Gladys decided to study philosophy at the Universidad de Oriente in Santiago[2]. In our meetings leading up to the interview, she reflected on how essential philosophy has been in her creative process. Like many idealists, Gladys believed in the promises to build a better Cuba and became active in the Revolución Cubana. “The best experience in life is to be excited about creating a new society based on freedom,” she points out. She moved to Havana, and in late 1958 her family met her there. When the Revolución entered la Havana in 1959, Triana, among other intellectuals, thought it would be time to foster new ideas and real art, and between 1961 and 1967, she had several notable shows. Still, in 1968 found herself confined in a forced-labor camp, one of the punishments imposed on women who rebelled against the Revolución[3]. After a period in hell, in 1969, she obtained an exit permit to travel to Madrid; she has never been back to Cuba since.

When preparing with Gladys for her CALL/VoCA Talk, I learned that her personal history is essential to building her artistic path, but her biography is not her art. As a tremendously optimistic and enthusiastic person, Gladys turns her eyes to the past to inform her practice, feeling that everything is for a reason. Now in her 80s, she is full of anecdotes, and it takes me three trips to New York and many more virtual meetings to prepare for the event. A successful interview is not about knowing her life or the chronology of each artwork; it is about building bridges. 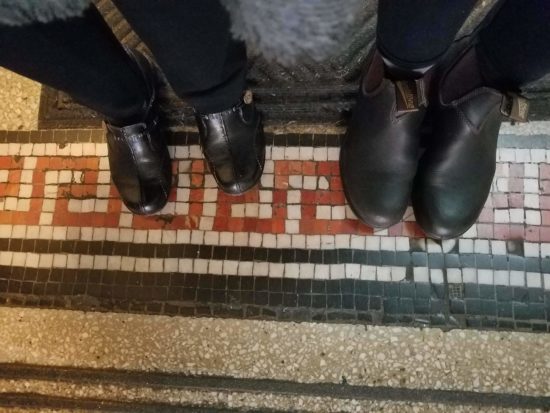 When Gladys Triana talks about her life, everything is intertwined: art is life, family is art, art is family, discovery is the world, people are opportunities. She jumps from past to present, from music to literature, philosophy and painting. To Gladys, music is always present, and therefore is part of “the installation.” Even her two-dimensional art productions—paintings, drawings, etchings—are installations of full space. Her chosen media depends on the project but also depends on the situation. Ideas and concepts are what moves her creation. For example, the shadows in her paintings are also shadows in her photography, and in her video-art, shadows connect to Plato’s Cave. When I asked about why she abandoned painting and started to use photography and video more often, she said: “Why fight against the limitations of your body when you can create?”[4]. 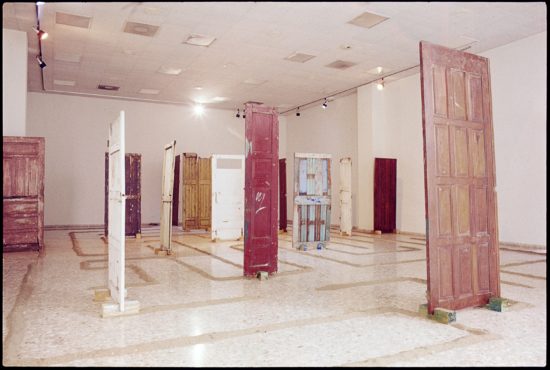 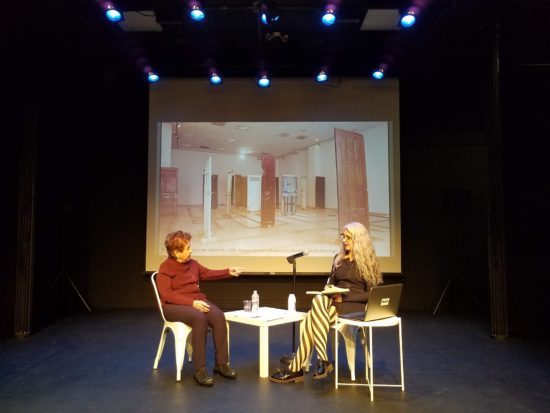 When I attended the VoCA Artist Interview Workshop in Miami, I learned that “people aren’t information machines. You can’t push a button and have the right answer come out. Memories are fallible, and they change, and that’s ok. In an interview, you are not going to get the answer you want, but the answer you get can be just useful”[5]. This is something I experienced with Gladys. For example, I asked Gladys some conservation questions about a specific installation called The Path to Memory: The Labyrinth (1991), shown at the Museo de Arte Moderno of Santo Domingo. It consisted of a series of doors, sand, and light with the audio of n.5 Bachianas Brasileiras by Heitor Villa-Lobos playing in the background. Her answer to my question was that the installation was presented with the wrong music so in a future reinstallation it should have the Bachiana n. 2. She also noted that the original doors were demolition doors salvaged from Santo Domingo’s poor neighborhoods. In case of reinstallation, she wanted old-new doors to be collected from a local neighborhood. For her, it was not important that the doors were the same as those used in the original installation, because the real artwork is the idea, not the objects. So, on the day of the interview, I asked the same question. To my surprise, her answer was different. Where her first answer was aligned with contemporary art conservation, Glady’s response on the day of the interview was spontaneous and equally enjoyable. With both solutions on the record, we can establish a conservation protocol if needed in the future. 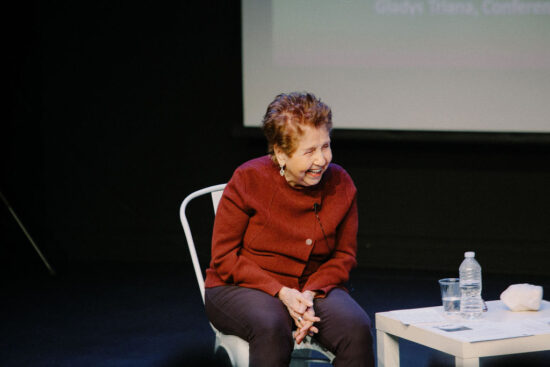 Learning first hand from the artist is an incredible opportunity and allows one to conduct a more authentic interview. With Gladys, it was only by taking the time to enter her inner world that I perceived that, in fact, everything is connected: her story is one big unique piece presented in different chapters. The process of preparing for my interview with Gladys confirmed another lesson I learned in VoCA’s workshop about building long-term relationships: it is about the long game. It’s worth establishing trust and a certain level of rapport over time, rather than just approaching the interview as a one-time encounter. Since our interview in January 2020, I have been fortunate to maintain regular contact with Gladys. She never stops working. Her next exhibition will be at the Fairfield Museum in CT, curated by Adriana Herrera in September 2022. These days of confinement, she had been creating photographs in her home studio and researching to solve technical problems for an installation that consists of covering the floor of water and suspending images in it. Or another future installation that consists of captures of the visitor’s shadows in an instant moment of projection. The essence of ephemera. Her passionate activity reminds me of something Gladys once told me: “What matters to me in life is being amazed.”

[4] Gladys Triana in a conversation with Ruth del Fresno-Guillem at her home in October 2019.