This week’s contributing author, Adela Eskenazi, is from Panama City, Panama. She is a fifth-year undergraduate student at Northeastern University in Boston, Massachusetts pursuing a BS in Architecture.

The Museum of Biodiversity in Panama, also known as the Biomuseo, is a complex postmodern building designed by world-renowned architect Frank Gehry, his first and only building in Latin America. Gehry cited his personal ties to Panama and his wish to preserve biodiversity—a term referring to the fantastic variety of living things on this planet, considering the diversity of species, ecosystems, and genetics—as reasons for accepting the commission. In a 2014 interview, Gehry said, “this has been a very personal project for me, I feel close ties to the people of Panama, and I believe strongly that we should all be trying to conserve biodiversity, which is threatened everywhere.”[1] Now, in 2020, as global warming, rampant pollution, and urban sprawl continue to endanger our natural resources, biodiversity remains threatened and reliant on international collaboration, which is why the Biomuseo deserves greater attention on the global stage.

The Biomuseo was founded by the Amador Foundation, a charitable Panamanian organization which strives to promote Panama’s history and protect its environment. Gehry’s well established track record for drawing global audiences as demonstrated by the Guggenheim Museum in Bilbao, Spain and the Walt Disney Concert Hall in downtown Los Angeles were clearly important precedents for the Biomuseo, which aimed to expand its reach and foreground Panama’s role in galvanizing support and greater awareness around the precarity of the world’s biodiversity. Despite the fact that architects such as Gehry have been criticized for drawing more attention to their designs than the exhibitions within them, or the use of museums to catalyze economic growth through tourism, the Biomuseo’s global visibility is integral to its mission. Selecting Gehry as the architect aligns with the Amador Foundation’s ambitious goals to showcase Panama’s role as a geographic and strategic connection between the North and South and highlight the country’s pioneering efforts to preserve biodiversity while also mitigating major factors that continue to threaten it including human impact and climate change. 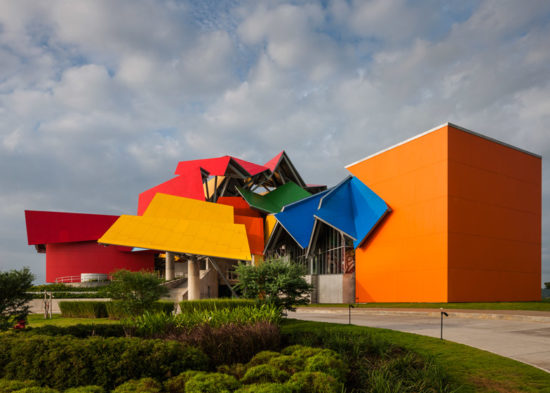 View of the colorful facade of the Biomuseo in Panama.

Therefore, the Biomuseo takes on an outsized role. More than just a venue for exhibitions, the building has become a vibrant symbol of Panama. The building’s postmodern design is composed of metal canopies of different shapes and sizes clad in blue, green, yellow, orange, or red. Gehry’s use of vivid colors is meant to reflect the neotropical habitat of Panama, and give homage to its wealth of diversity and culture. The ten separate pieces that compose the roofline come together at different angles, uniting the two levels of gallery space around a central outdoor atrium, which is the focal point of the museum. In this grand atrium, the steel beam structure and corrugated sheet metal remain exposed, resembling the typical tin-roof housing found locally. The building’s bold facade has already made this building one of Panama’s Landmarks, even though it only opened in 2014. 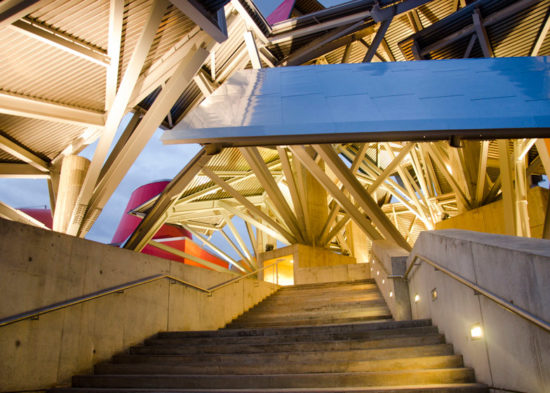 View of the outer canopy of the Biomuseo building from the inside.

Along with the complex  structure comes a well-designed contemporary permanent exhibition by multidisciplinary designer Bruce Mau, made in collaboration with the Smithsonian Institute and the University of Panama. The exhibit tells the story of Panama’s rich biodiversity through oversized visual compositions which explain the changes in the world’s biodiversity when the land now known as Panama rose from the ground 3 million years ago, becoming the last key piece connecting the continents of North and South America. This exhibition, entitled “Bridge of Life,” is divided into eight gallery spaces, each one taking on a topic relating to Panama’s impact on biodiversity around the world. The displays employ sculptures, videos, or interactive machinery, as is the case of “Panama is the Museum,” which uses an interactive virtual network that links the museum to the rest of the country.

In the case of the “Worlds Collide” gallery it uses sculptural representation to depict the moment in which Panama was formed, uniting two separate pieces of land, and the resulting interaction between their wildlife. Two sets of white, life-size animals both small and large illustrate the wildlife of the South and the North, such as the forgotten giant ground sloth, a predecessor to the sloths that exist in the world today. The animals are shown migrating, and their positions around the space show movement even in their static state, allowing the viewer to walk between and below these animals and immerse themselves in the piece. The immense scale of the piece and its representation as a contemporary artistic composition creates an undeniable spectacle, one that is echoed in all the galleries. 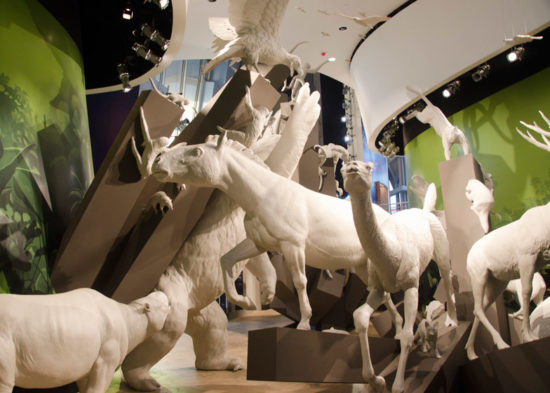 Sculptural representation of the junction of two worlds on the “Worlds Collide” exhibition.

In addition, the Biomuseo holds temporary exhibitions and several outdoor exhibits throughout the botanical park. One of the first temporary exhibits, held in 2014-15,  explored “the fossil discoveries that enable us to know the immense formations of ancient Panamanian environments,”[2] where 20-million-year-old fossils from the Panama Canal were displayed alongside murals with information and images explaining the findings of the Canal’s excavation. In a 2017 exhibition entitled “Exhibición Temporal Picante”, the primary artist was chosen through a competition where Panamanian artists were asked to create a piece that depicted Panama’s biodiversity and its connections to the world. The winner was artist Ian Chang whose concept connected different facets of chili peppers’ biology to Panama’s cultural diversity. The exhibition, which opened in July 2019, explored the American roots of different facets of chili peppers through audiovisual, gastronomic, historic, and artistic pieces. The central piece of the exhibition counted with interactive movable panels depicting historic information and influences of chili peppers. Both temporary exhibits demonstrate the role of biodiversity through the years and showcase Panama’s role in its evolution, which is exactly the concepts that the Biomuseuo strives to promote. 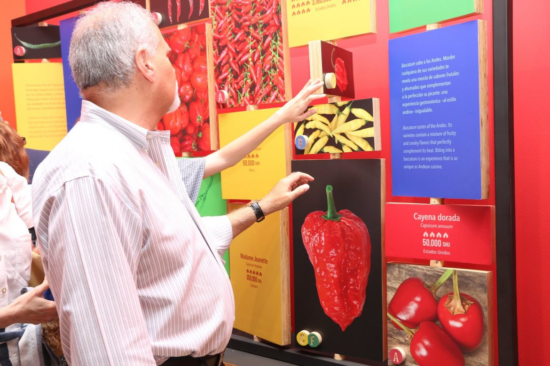 Central piece of the “Exhibicion Temporal Picante” by Ian Chang.

In September 2014, a month before the opening of the museum, Executive Director Victor Cucalón Imbert said in an interview: “We are deeply grateful to Frank Gehry and his collaborator in design, Bruce Mau, for giving us a museum that so beautifully and effectively expresses the mission of Biomuseo. Thanks to this extraordinary project, we know that Biomuseo can become a cultural and eco-tourism destination, as well as a symbol of global concern for the environment and for conservation, enabling us to send our message throughout the world.”[3] I totally agree, and believe that Gehry succeeded in designing a building that effectively marries the unique structure with its admirable mission. The Biomuseo is as diverse and lively as the land it is built on, a colorful architectural statement whose relevance and commitment to preservation have only grown over time.