This week’s contributing author, Marshall Reese, is an artist working in new technologies, video, installations, artists books and limited editions. He has worked in collaboration with Nora Ligorano as LigoranoReese for over two decades.

This blog post is part of periodic series from contributor Marshall Reese that focuses on “outsider archivists,” people who highlight the tensions between traditional and born-digital archives and the transition between the two. Mnemosyne is the Greek goddess of memory, the mother of the nine muses. Her significance only seems to grow as we externalize more and more of information, data, and records.

For the past few years, I’ve been thinking about how we save and organize information, about how we can ensure that new media artworks exist and function in the future. I’m especially interested in how libraries and archives will look over the next decades and the impact the internet will have on them.

So my curiosity was piqued in December 2018 when I stumbled on Bob Stein’s Facebook posts noting that he had just embarked on organizing over 300 boxes of papers, books, t-shirts, leaflets, periodicals, outmoded software and hardware and was blogging about it. 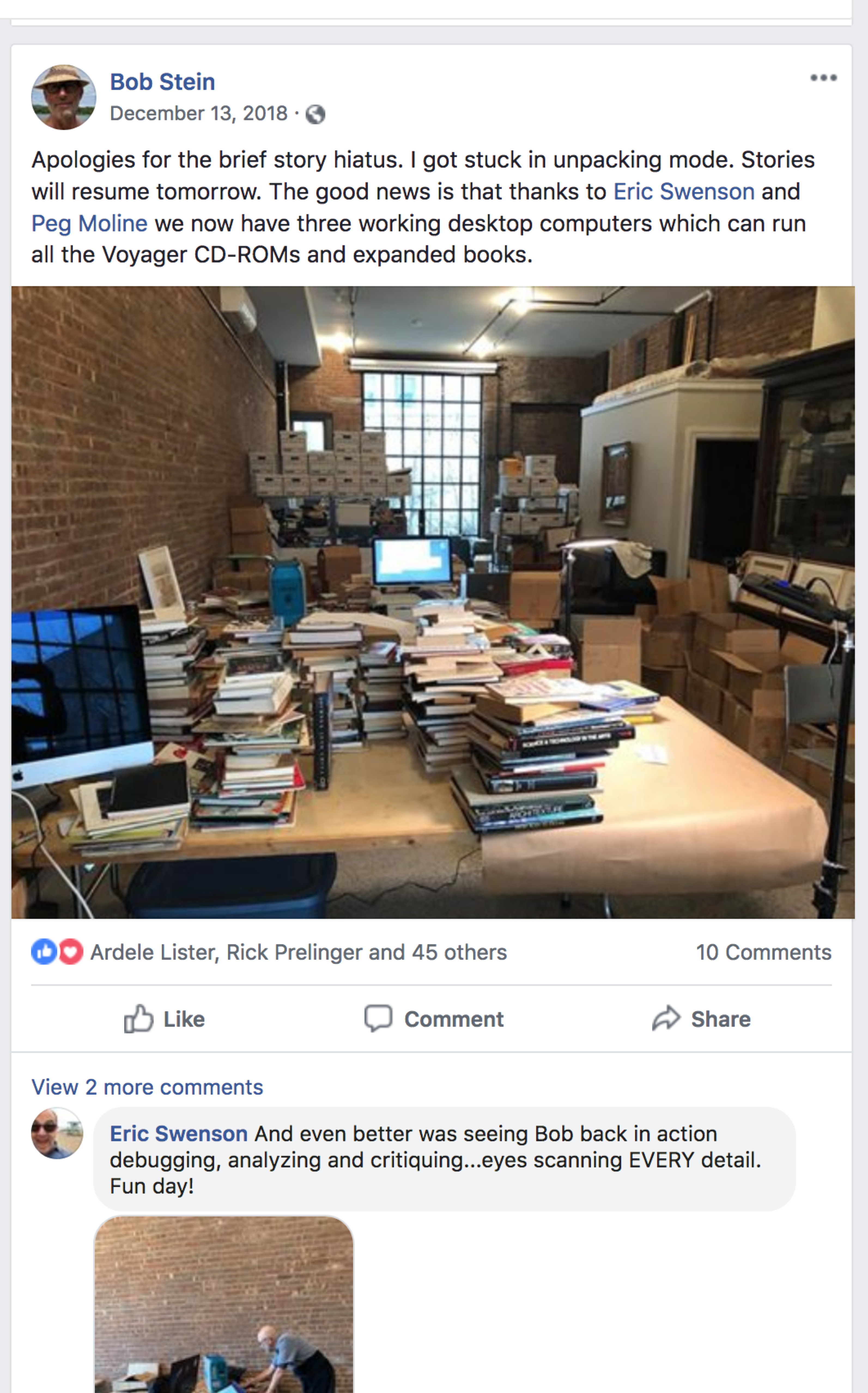 Stein was a consultant to Alan Kay, chief scientist at Atari Research Group, and founded The Criterion Collection and the Voyager Company. Both were among the first publishers of hypermedia, videodiscs, CD-ROMs, and electronic books with titles such as the CD Companion to Beethoven’s Ninth Symphony and the electronic book editions of Susan Faludi’s Backlash and Douglas Adams’ Hitchhiker’s Trilogy among others.

Bob’s posts query about equipment or detail his day’s progress sorting through materials; some posts highlight objects and book covers that trigger his memories while others muse on the process he is currently undertaking, grappling with issues about permanence, memory, and the challenges of reading the past. 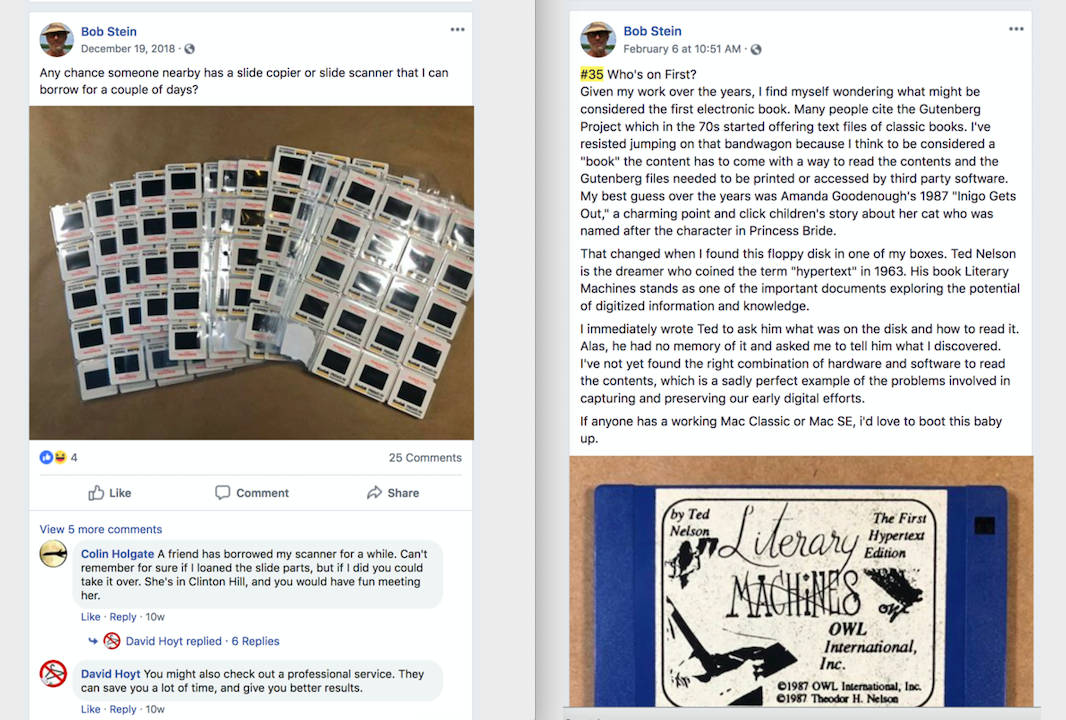 Intrigued by his mission, I decided to visit Bob to talk about what he was doing and why.

“After my partner Ashton had dinner with a friend whose husband passed away leaving a million slides behind, she said, ‘Bob, you have to do something with those 300 boxes of yours, because when you keel over, I’m not!’” That was the start, but the real motivation turned out to be a nightmare Bob had.

“I was in Toronto and stopped off to see [Marshall] McLuhan’s archives. They’re sitting in the basement at the University of Toronto Library, basically unattended and stripped of any history like Citizen Kane’s sled.” Two nights later Bob woke startled, having dreamed that his stuff would just lay in a basement somewhere, so he came up with a novel idea to publicly open the boxes and just give everything away. But after a minute or two he realized there probably wasn’t much that people would actually take since it was mostly digital or paper records.

For Bob, “the central issue [is] not fundamentally what to do with an archive as much as it [is] for searching for a ritual… that foregrounds the archive as a tool for contextualizing memory.”

He explained, “In the collaborative era we now live in, we’re learning that meaning is socially constructed and that memory and history are not fixed. An example is Wikipedia, where the truth of a subject isn’t only, or even mainly, in the surface article, but in the “history” of the article which preserves the back and forth editing where contributors argue over key points.”

At a TED residency, Bob set up a room with 50 of his objects, inviting people to pick them up and ask him about them. “The conversations were very interesting,” he told me. “By far the most compelling was with a young African-American guy, who asked me about a Leonard Peltier t-shirt I had. I realized during our conversation… he was actually able to ask himself some important questions about his own life. It seemed of value for him to have this conversation.”

It then struck Bob “that the ritual of telling the stories was not to send information down the chute from one generation to another, but … to find a way to put subjects out there… [because] the problems in front of all of us, are too complicated for a) anyone of us to solve or b) for any one generation.”

The way I found Bob –through his Facebook posts– was actually an experiment of his to work out what things held the most interest, to understand how people respond to different objects, and to learn how to write in a style that nurtured exchange and interaction. Stein, being the interactive media pioneer he is, was using his Facebook feed as a testbed for a new platform to build an archive with social media, so that heterogeneous media could exist and be read in parallel, along the lines of the electronic books his company Social Book (started in 2010) once designed and published.

“I realized… that we had shifted the hierarchy of the author and the reader… Suddenly we had put them in the same space and [when we embedded film in a browser] people had the same complex threaded conversations… in the margins of the film like that of a book. It’s a dramatic shift from the way we normally consume media.” 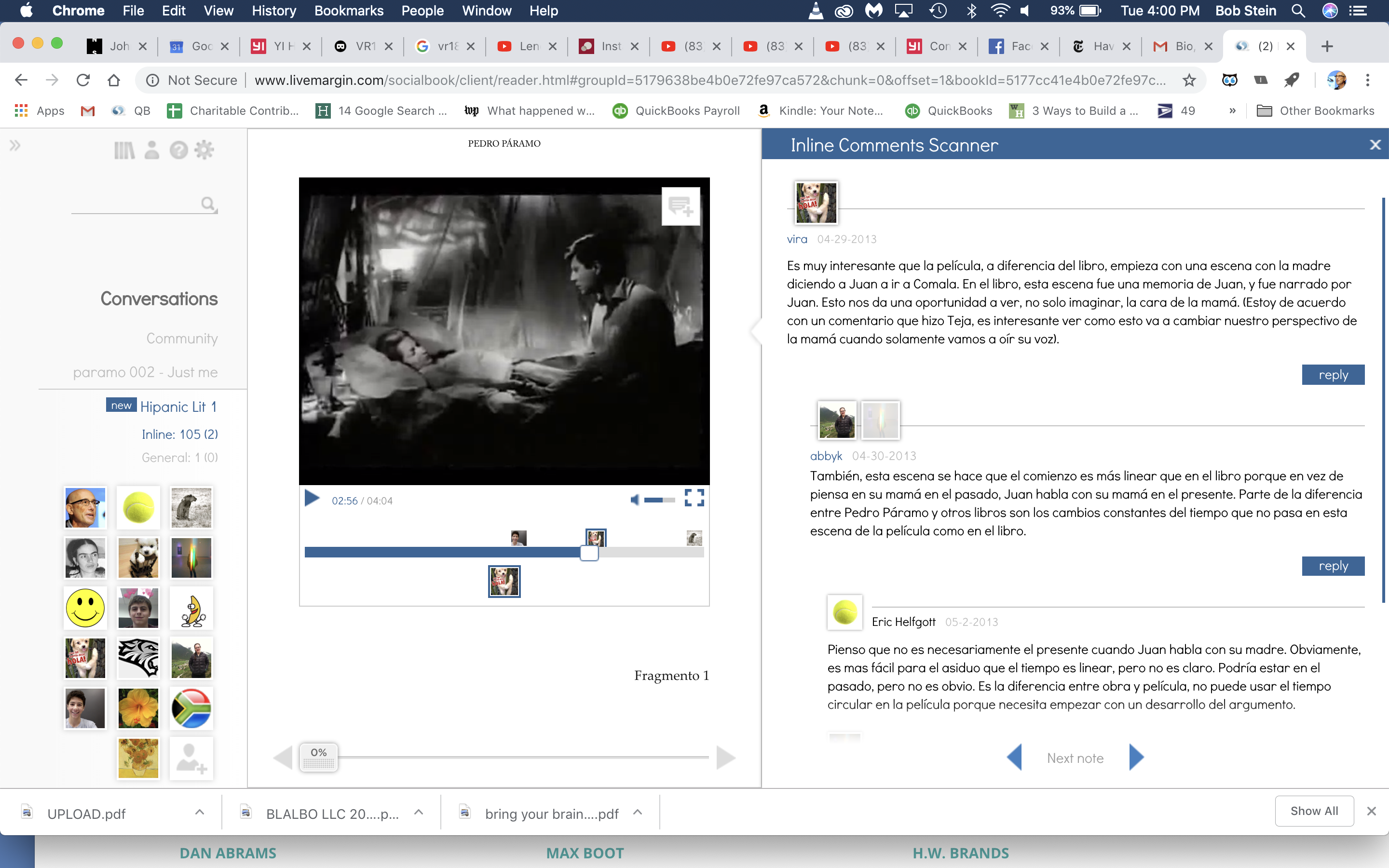 Stein seems to be approaching his archive like a 3-D game designer. “The context is the interface to the whole thing,” he said, picking his parent’s vintage ashtray off the coffee table and holding it in his hands.

“What I’m most interested in… is what happens when you pick up an object. Archives have to live. Just to dump stuff over there and have it sit there for this weird graduate student who wants to know something about the 1980’s, that’s not the purpose of the archive. The purpose… is that it’s a way for the present to understand possibilities by interrogating the past. I’m not sure if we have wisdom to impart, but we have a role to play in helping the other generations that are here… figure stuff out.”