This week’s contributing author, Ricardo dos Santos Almeida Nunes, is a recent graduate in computer science at NYU and is pursuing a career in data journalism. He is from Brazil and enjoys exploring the intersection between art, culture, and technology.

Hannelore Roemich, PhD, Professor of Conservation Science, Conservation Center, Institute of Fine Arts, New York University, introduced the second day of the TBM Symposium 2018 by defining the scope of time-based media (TBM) art conservation education. Roemich highlighted some of the topics discussed on the previous day: the need to focus on local resources; the added value of collaboration among experts with different backgrounds; the goal to balance teaching conservation practice while also teaching conservation theory; and the benefits of mentorship.

Session 3 on CHALLENGES AND NEEDS was chaired by Nora Kennedy, Sherman Fairchild Conservator in Charge, Photograph Conservation, The Metropolitan Museum of Art.

The first speaker of the day, Iolanda Ratti, Conservation Researcher, Collection Curator at Museo del Novecento (Milan, Italy), addressed the challenges for TBM conservation in Italy. Ratti acknowledged the importance of tradition in conservation in the country, but noted that tradition can also be an impediment when establishing new standards, even when innovation is urgently necessary. Ratti discussed the situation at the Museo del Novecento, which has a growing TBM collection but training has not yet been made available to their staff. Sara Abram, Projects Development and Fundraising Manager, Centro Conservazione e Restauro La Venaria Reale, Milan, Italy, highlighted the recent initiative by Centro Conservazione Restauro La Venaria Reale, which offers an MA degree in conservation and restoration of cultural heritage and she optimistically noted that currently there are efforts to design training courses geared towards TBM professionals.

Jo Ana Morfin, Instituto de Investigaciones Bibliográficas, Universidad Nacional Autónoma de México (UNAM), dedicated her presentation to Manrico Montero, an artist and sound environment engineer who recently passed away. She addressed current institutional needs as well as options and obstacles for art conservation education in Mexico. Morfin acknowledged the help she received from experts in the audience. She concluded by describing the current focus in the field: the development of guidelines for digitization; promoting awareness regarding formats and metadata; the creation of AV collections; and encouraging the use open source tools among others.

Natalie Harding, Associate Object Conservator, M+ Museum, Hong Kong, China, introduced M+, a museum dedicated to the preservation of visual culture in the 20th and 21st centuries, focused on Asian and international art, design, architecture and moving image. Harding touched on one of the museum’s first exhibits, Canton Express 2017, an iteration of Canton Express from 2003, as originally presented at the Venice Biennale. Her co-presenter Shu-Wen Lin, Research Fellow for Digital Preservation at National Library of Medicine, Bethesda, previously the TBM conservator in charge of Canton Express 2017 at M+, highlighted the importance of routinely reviewing restoration processes. Lin emphasized the importance of communicating in a shared terminology, understood by the team, and of the need to educate local vendors and contractors. Lin highlighted the benefits of collaboration with Hong Kong University and the participation of external contractors such as Isabel Meyer and Ben Fino-Radin. 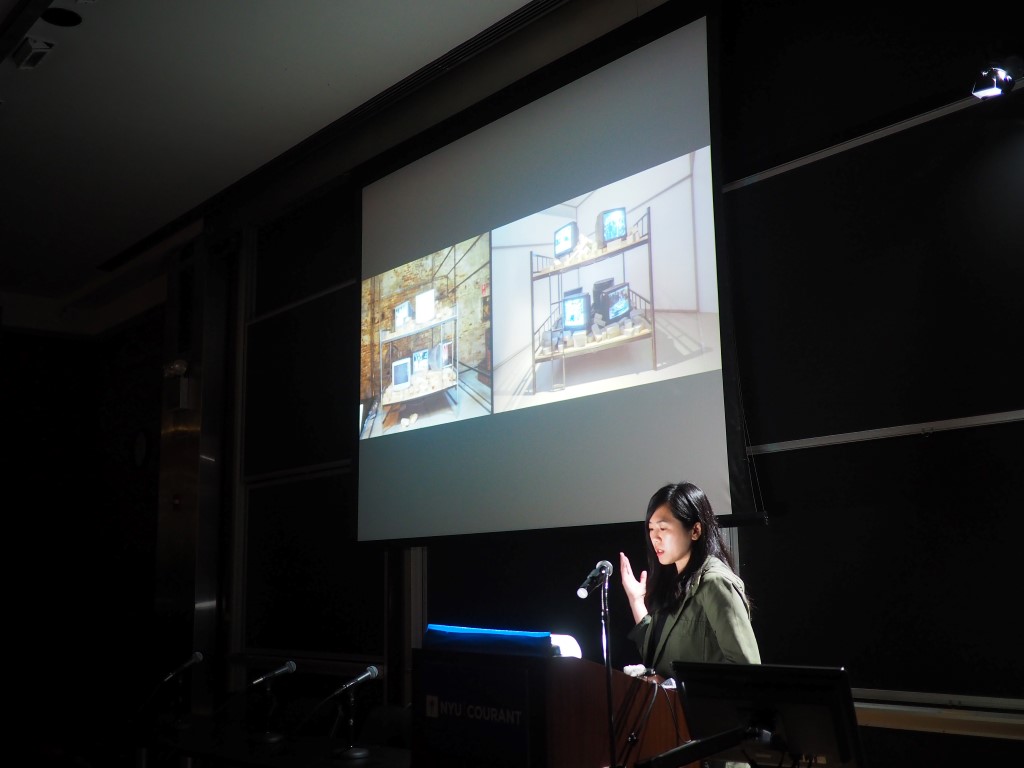 Barbara Miller, Senior Curator of Collections and Exhibitions, Museum of the Moving Image, New York, observed that over the last two years, the museum has reviewed their collection policy and concluded that a gap analysis was essential in this assessment. Miller focused on three case studies: digital artifacts of production; acquisition of Vine’s entire social media platform code and content; and acquisition and preservation of animated GIFS that were commissioned for an exhibition. The second speaker of the team, Jason Eppink, Curator of Digital Media, highlighted expansions of the collection since 2011, to include installations in the museum lobby, objects reflecting vernacular culture and video games, and elevators displaying animated GIFs. Ben Fino-Radin, Founder, Small Data Industries, New York, hired by the museum as a consultant, introduced the challenges of documenting animated GIFs. He also addressed the issue of analyzing knowledge gaps in institutions and creating reliable roadmaps in order to assist professional staff in crafting new policies and procedures.

Sarah Thompson, Conservation Department Assistant, The Menil Collection, Houston, Texas, gave a brief introduction to the Menil facilities and collection and explained that collaborative efforts have been established within the museum, as well as with outside specialists and living artists in order to create proper documentation and to allow for long-term care of the works. Her co-author and colleague Bradford A. Epley, Chief Conservator, announced that funding was established with support from the Mellon Foundation towards the goal of promoting better conservation of TBM art. The Menil team is working to develop policies and procedures to support documentation and care for TBM art.

Lisa Catt, Assistant Curator, International Art, Art Gallery of New South Wales, Sydney, Australia, spoke about the role of curators and conservators in the care of TBM art and the need for the gallery to adopt new practices. There is a major effort underway to modernize the museum and its collection practices. Catt highlighted the aspects of new practices that include a collaborative environment to encourage shared documentation and the continued centrality of the artist’s voice. Her colleague and co-author Asti Sherring, Time-Based Art Conservator, stated the importance of defining terms used to identify and catalogue TBM objects, which was a step in the complete rethinking of the database by questioning “What is the artwork?”. Rethinking the cataloging system as it applies to TBM has promoted a number of modifications in the gallery’s practice and is a promising step forward.

These presentations further emphasized the complexity of caring for TBM artworks. The development of new strategies and policies for conservation promotes the spirit of collaboration which allows professionals in the field to establish reliable standards and efficient practices to better preserve and re-exhibit the artistic vision of current and future TBM artists.