This week’s contributing blogger, Regina Harsanyi, is a second year M.A. candidate at the Institute of Fine Arts, NYU and a current member of NYU’s Curatorial Collaborative. Her previous registrar experience in the fine arts sparked her interest in technical art history and material preservation. She’s currently primarily focused on the history of moving image in the gallery space. 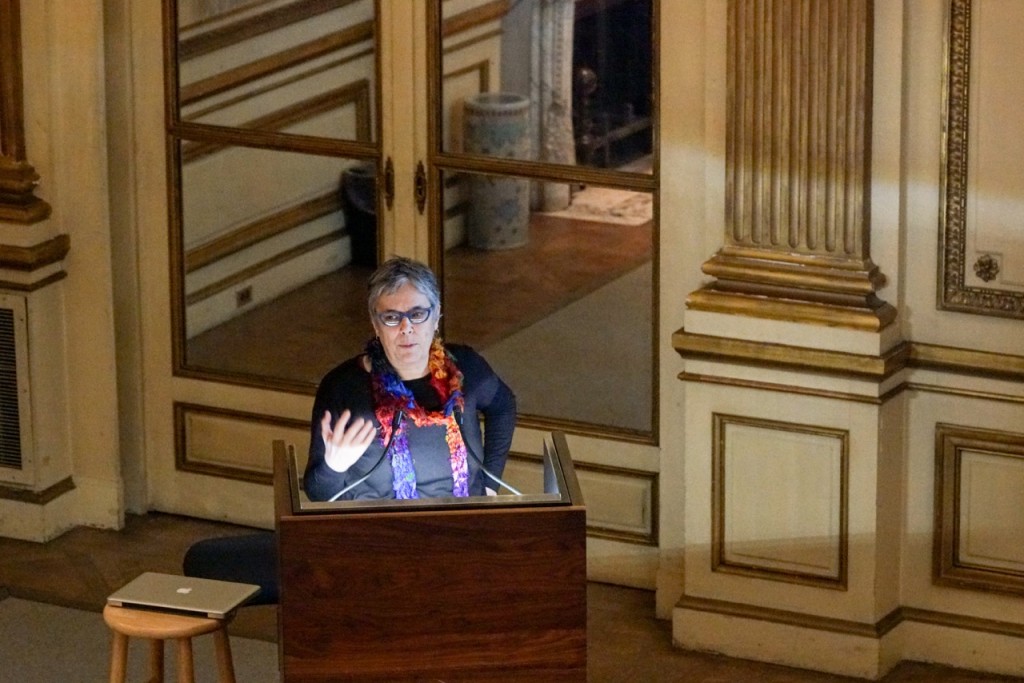 Whether you’re a creator, collector, caretaker, academic, or enthusiast, you have a part in ensuring the safety, longevity, and accessibility of art. Mona Jimenez, the current co-Associate Director at MIAP (Moving Image and Archiving Preservation Masters program), and longtime activist for media preservation, focused on a fifty-year history of what she defines as a media ecosystem. Jimenez’s lecture centered around video born artworks, a medium with one of the longest and most active preservation effort histories in time-based media.

Jimenez first gave a brief background on the initial uses of video as a creative medium. She reminded the audience that before the widespread commercial use of video, magnetic tape was only utilized en mass by broadcasters and artists who had access to materials at universities. At the time, video born footage was viewed as a subversive alternative to mass media (i.e. television). Video became a platform for independent thought, experimental art, and counter politics. Conversely, video was such a new medium in this time period that broadcasting stations would allow for artistic experimentation with video, briefly breaking down the barrier between mass media and fine art. Before video was recognized as an artistic medium, magnetic tape was also often used as a primary accessibility copy in archives and libraries for educational purposes.

The deterioration mechanism of magnetic tape elements were well understood early on. For example, controlled relative humidity and temperature can only do so much to keep the binder, which essentially protects the recorded material, from breaking down. Even with this in mind, efforts have been made since the early 1970s to preserve the history of this carrier and its unique visual content. Jimenez reminded us that this obsolete medium’s content is still endangered. The major takeaway is that becoming active in the community of preservation is key to protecting video, or truly any endangered art work. No matter what your current role is, there are ways for you to get involved. We, as a society, hopefully feel a sense of responsibility to keep this history alive.

Jimenez created a truncated timeline of the history of conferences and coalitions made on behalf of video preservation between 1972 and 2006. Here is a selection of items from her overview:

Electronic Arts Intermix: Emerges from the former Howard Wise Gallery, helping to not only service endangered video but expressing the need for universal vocabularies in describing video works.

Media Studies Buffalo: Gerald O’Grady leads the way in preserving the history of video art and encourages further artistic use of video.

Amy Greenfield: An artist writes one of the first publications on video endangerment

Media Arts in Transition: A conference which focused on video as being equally, if not more endangered than film and audio works. By this point, video was in great abundance but had little to know funding for preservation, especially in comparison with film.

Media Alliance: Securing the Future of the Past Conference

Independent Media Arts Preservation (IMAP): A Non-profit service which emerged to service and educate on non-commercial videotape. Attempts to create widely use cataloguing language for media.

TechArcheology: Guidelines and practices discussed for installation art, including those with video elements, making new strides into the video art community

Archiving the Avant-Garde: Program to help catalogue and preserve digital media, including video

Jimenez’s lecture was essential in that it provided a window into the half-century of video conservation efforts, not only for conservators but an entire body of professionals and enthusiasts in the fine arts. These timelines are crucial, as they impart an understanding of previous motivations and efforts, allowing the community to build upon prior activities. Although this talk focused specifically on video, much can be learned about the necessity for collaboration, to ensure the legacy of all time-based media.

A video of this event is available in the NYU Institute of Fine Arts Vimeo archive: https://vimeo.com/190899656

VoCA is pleased to present this blog post in conjunction with the NYU/IFA Conservation Center’s Topics in Time-Based Media Art Conservation lecture series, which took place on Mondays during the 2016 Fall semester. The series is organized by Hannelore Roemich and Christine Frohnert and is generously supported by the Andrew W. Mellon Foundation. For more information, please visit https://www.nyu.edu/gsas/dept/fineart/events/time-based-media.htm