Ellen Moody is an Assistant Projects Conservator at the Museum of Modern Art in New York, where she enjoys working with modern materials and living artists. She holds an MS in Objects Conservation with an additional concentration in Preventive Conservation from the Winterthur/University of Delaware Program in Art Conservation. 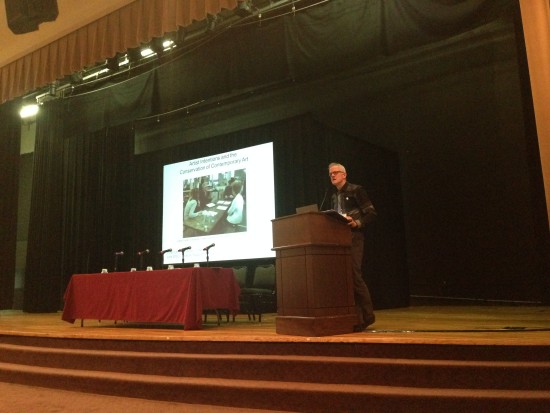 In his talk “Artist Intentions and the Conservation of Contemporary Art,” Glenn Wharton called for the abandonment of the term “artist intent,” arguing that it doesn’t serve the field of conservation well. This is a bold statement. Sure, we have observed that artists speak through filters — memory, evolving interests, or motivations — and in short, everything must be taken with a grain of salt. But who better to articulate an artist’s intentions than that primary source?

But as Glenn pointed out, defining the intentions of the creator is now well-trodden territory across the humanities (for a bite-sized meditation on authorship, see this New York Times Magazine column, thanks to Jim Coddington for the link). Art criticism, too, explored the subject some 50 years ago, with anti-intentionalists arguing that the artist is actually unable to truly express her intentions, because the idea is still in her head. Conservation—or this conservator, anyway—is only now catching up.

Theory aside, Glenn drew from his own experiences as the Media Conservator at the Museum of Modern Art to demonstrate the ambiguity of the term “artist intent.” He would interview artists for insights into their works, sometimes many years after their creation. Case studies he presented highlighted several key observations:

A. What the artist defines as a work’s essential qualities for re-exhibition are not necessarily apparent in the original installation (for Bruce Nauman, it was the images in his Think, rather than the display equipment; for John Maeda, it was the recorded interaction between viewer and work in the original iteration of Reactive Books, rather than a reconstructed installation).

B. The artist’s attitude towards her work changes over time (for example, Marianne Viero’s fading interest in the compositional problems of her installation Modern Indoor Gardening, which initially had a strong effect on the piece’s outcome as she “worked them out”).

C. The artist does not necessarily want to be the one to make decisions about how her work will be shown (e.g. Nam Jun Paik’s practice of delegating decisions about display equipment to others, which seems to embrace the fact that new iterations are co-produced with the involved staff at any given institution).

While point A suggests speaking to artists about their intentions is essential to showing their work properly in the future, B & C argue that what artists say about their work is never absolute or unchanging—qualities we might ascribe to the word “intent.” Having pointed out the inherent limitations of “artist intent,” Glenn suggested we instead use the term, “artist sanction.” Coined by Sherri Irvin in her 2005 essay, “The Artist’s Sanction in Contemporary Art,” the artist’s sanction is simply what an artist says about her work in the time she said it, nothing more.

This more nuanced approach made the term “artist intent,” or at least our use of it, suddenly sound archaic to me. Built into the word “sanction” is context and objectivity: unlike “intent” it doesn’t claim to reclaim an earlier, potentially unreachable, state of mind. Just as the once ubiquitous term “reversibility” is now being replaced with the more apt, “retreatability” to describe what we often aim for with our conservation interventions, “artist sanction” is a result of our discipline’s evolution.

Putting theory to practice, Glenn proposed a working model for museum professionals, wherein the artist is given a privileged spot at the table when decisions need to be made about exhibition and preservation. But the table also has space for a range of professionals, including curators, art historians, conservators and, occasionally, the public, who examine and interpret the artist’s sanction, bringing their own understanding to the ultimate (re)production of the work.

END_OF_DOCUMENT_TOKEN_TO_BE_REPLACED

[…] upon which to base all conservation decision-making (see Ellen Moody’s VoCA blog post “The Abandonment of Artist Intent” ). This topic was reiterated by Kate Lewis in her paper “Beyond the Interview: Working […]