This week’s contributing blogger, Amanda Norbutus, is the Mendel Science post-doctoral fellow in chemistry at Villanova University.  Her dissertation research focused on UV-protective coatings for outdoor painted surfaces as well as on the creation and conservation of modern public murals as part of the Preservation Studies Program at the University of Delaware in 2012.

Public murals have occupied a space close to my heart since I first started researching mural materials in 2008 at the University of Delaware.  By dint of their scale and location, public murals are one of the most exposed and vulnerable art forms and thus the preservation of these outdoor works present a variety of challenges. The goal of my research is to provide tools for modern mural conservation through the accumulation and distribution of knowledge. 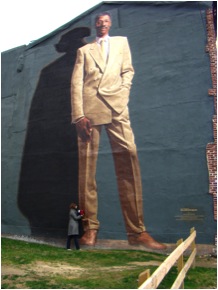 Amanda performing portable FT-IR on the paint and coating binders used on Kent Twitchell’s “Dr. J” (Philadelphia, 1990) to determine degree of deterioration of the materials.

In order to gather and evaluate this knowledge, I have collaborated with conservators, muralists, paint companies, scientists, and members of the Mural Arts Program of Philadelphia (MAP) and Rescue Public Murals (RPM) to test materials and develop preservation and maintenance protocols for public mural programs.   Together, my colleagues and I are able to disseminate material research directly to mural artists and public art programs through web posts, seminars, and on-site collaboration with the artists.

Murals are exposed to everything from sunlight and varying weather to abrasions, such as to backpacks brushing against the paint surface as people walk past.  UV radiation from the sun and moisture affect the color of the pigments such as cadmium red and yellow, a surprise for some artists who expect the same stability and intensity of cadmium colors as when the paint is used in interior artworks.  The colors of a mural can also be affected by the photodegradation of the binder, which makes the paint appear faded.  In my initial research, I focused on investigating the stability of commonly used mural paints, resulting in a “recommended pigment list” for muralists to reference when selecting a color palette. 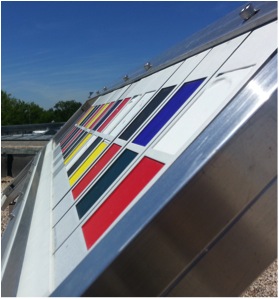 One of the natural aging test racks holding artists’ paints. The customized Weathering rack, made of Aluminum and high-density polyethylene, is positioned to the south and at a 45° tilt for maximum sunlight on the surface of the samples.

From the list of suggested paints, I have been naturally and artificially aging artists’ acrylic paint since 2008 to see if I can pinpoint a time range of when color starts to visually change.  Colorimetric measurements of the L*a*b values are collected quarterly for the first three years, then biannually after year three.  Quarterly testing will allow us to capture the rapid color changes that often occur in the first years after painting a mural, before the paint binder and colorants reach “semi-equilibrium” around year five. Periodically, micro-samples –about the size of the period at the end of this sentence– will be removed from the wall to be analyzed using pyrolysis-GC-MS (gas chromatography-mass spectrometry) and FT-IR (Fourier Transform Infrared spectroscopy) to track binder degradation versus pigment deterioration of the paints.

A second branch of mural research happens in the lab, where I am working with to identify a coating that will work to reduce potential UV absorption by the paint layer, therefore minimizing the fading caused by pigment change and binder deterioration.  I have tested artists’ coatings, marine coatings, architectural coatings, and more.  One of the “approved” coatings was used during the restoration of Meg Saligman’s Common Threads (Philadelphia, 1997) in 2010. 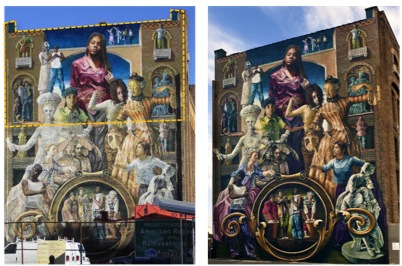 However, most of the available coatings have one thing in common: they are dissolved in a solvent that evaporates into the environment. Recently, I have worked to develop a coating that can be applied and removed in aqueous conditions in order to be more environmentally and conservator friendly. I have had success with making a flexible, durable coating that is reversible aqueously (pH<10, so will not wash away in rain)… if only the coating was transparent and not translucent!  The project is on going, and gets closer to being completed as I write.  It is hoped that the coating will be applied to available test squares in the schematic seen above.

Since I first started on this path in 2008, there has been a heightened awareness of the need for collaborative planning for mural maintenance and preservation.  Thanks to the efforts of conservators like Cassie Meyers, Leslie Rainer, Richard Wolbers, and Joyce Hill Stoner, as well as members of the technical staff of Mural Arts, past and present, I have been able to pursue this very rewarding area of research. The role of active conservation in the service to the field of public murals is increasingly shared among artists, conservators, scientists and other mural professions and I am excited to see what else we can discover as these collaborations continue.