This week’s contributing blogger, Nick Kaplan, is the Collections Assistant at the Hirshhorn Museum & Sculpture Garden. Starting as an intern in 2012, he has been involved with the museum’s artist interview project since it began. 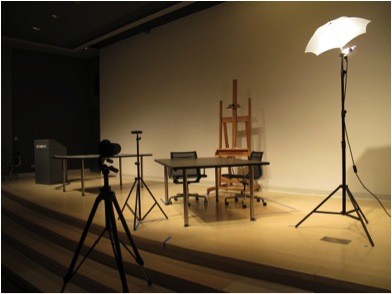 In the fall of 2012, the Hirshhorn Museum and Sculpture Garden launched its artist interview program Capturing the Contemporary, lead by Smithsonian Conservation Fellow and VoCA Program Committee member Steven O’Banion. The primary aim of the program was to document artist interviews and retain them for future use as tools to aide in the conservation of the artist’s work, while also producing high quality videos for public dissemination on the web.  These two main issues helped to guide the team’s decisions regarding the acquisition of specialized equipment.  What follows is a brief description of the chosen equipment, how it is used, and some of the rationale leading up to its purchase.

The Zoom Q3HD video camera was one of the first items to be bought. Several of the features that made it an attractive option were its simplicity, portability, and the high quality of its internal microphone system. It functions as a reliable option for recording quickly in informal interview situations where more elaborate staging preparation is not always possible. It records audio-video files in widely compatible formats on SD/SDHC cards, so there is no limit to recording time, and its built-in USB cable allows for easy file transfer. The camera’s picture quality is good, but the quality of its audio was one of its most attractive features. During more formal interviews, the Q3HD is routinely used as a backup for other equipment since its microphones dependably record everything that is said. Its sensitivity, however, does result in a tendency to pick up a lot of ambient background noise. Thus, the camera is best suited to situations where the main objective is simply to record documentation of all the information presented during an interview. Unfortunately, the manufacturer has discontinued the Q3HD, but the characteristics that made it an attractive choice are important considerations for any analogous piece of equipment, such as the Zoom Q2HD, which is still available and a good alternative. 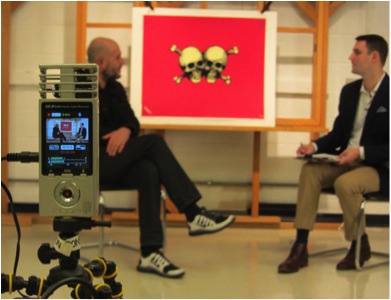 Zoom Q3HD as used for 2013 interview between Jake Chapman and Steven O’Banion. Photo by Caitlin Richeson.

For recording higher quality videos, principally those intended to be edited and disseminated for the public to view, we chose to use a Canon EOS 5D Mark III with an EF 24-700mm f/2.8L II USM zoom lens. The dual functionality of this DSLR camera made it an appealing option. Unlike a more conventional video camera, the Mark III can switch between shooting video and working as a standard photographic camera. Thus, it was an investment that could be used more broadly by the conservation department for a range of visual documentation. Additionally, as a DSLR it is a relatively familiar piece of equipment. Although the camera’s video mode does have some settings that are specific to video recording, most correspond to similar photographic settings, which make them reasonably straightforward to learn. Choosing the Mark III did, however, come with some draw backs. One widely reported issue is its tendency to overheat after prolonged video recording, which could potentially lead to awkward breaks in the middle of interviews.  Similarly, the Mark III can only record video in thirty-minute increments, at the end of which the camera automatically stops recording and must be restarted. During interviews, however, the effects of these issues have been mitigated by filming with two cameras that begin recording at slightly different times. 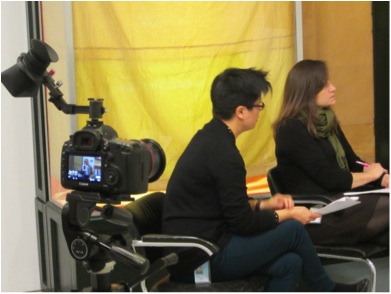 Arguably the most important set of equipment that has been purchased is the dedicated audio components. Whether an artist interview is being conducted primarily to document information for future conservation research, or is to be used as public promotional material, the importance of high quality audio recording can’t be overstated. So, in addition to the Zoom Q3HD, a Zoom H4n audio recorder was also purchased. Both have high quality omnidirectional internal microphone arrangements that work well, especially in quiet, closely controlled shooting environments. As previously noted, however, the internal microphone systems are vulnerable to background noise and echoes, which can become an issue when an interview is being conducted in a gallery, artist studio, or any other unpredictable environment. To achieve optimal audio clarity, it is ideal to mic each interview participant individually. The H4n, unlike the Q3HD, is equipped with two combination XLR/TRS audio input jacks, and thus is able to accommodate the two externally wired MXL FR-355K lavalier interview microphones, which were purchased at the same time.

As the Hirshhorn’s artist interview program continued to develop, the interviews grew in complexity and popularity. It became apparent that restrictions this audio arrangement imposed on the number of participants and their mobility during the interview necessitated an upgrade.

The Roland R-44 portable field recorder was selected to replace the H4n. It’s recording quality and sampling frequency of up to 24-bit and 192kHz were particular appealing.  It provides excellent sound quality and the higher the sampling frequency lowers the likelihood that a delay will develop between the timing of audio and video recordings, though this must be monitored during recording as a precaution. The R-44 also has four combination XLR/TRS audio inputs, each with independent sensitivity control knobs, which makes adjusting the recording levels of individual speakers during interviews much easier. Its size, portability, use of memory cards, and USB outputs were additional incentives, as well. 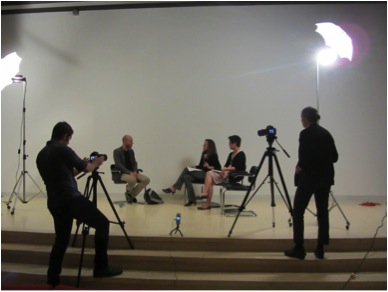 Three Sennheiser ew 112-p G3 wireless microphone systems with ME2 lavalier mics* were also purchased to replace the wired MXL microphones. Each set is comprised of a microphone and transmitter, both of which are worn by the speaker, and a receiver that is plugged into the recorder. The transmitters and receivers are easy to use, run on two AA batteries, and have an approximate life span of nine hours. Their principle virtue, however, is that they are wireless, which lends freedom of motion to interview participants and makes it easier to accommodate different speaking styles.

A lot has been learned during the first year of the Hirshhorn Museum’s artist interview program. As the program moves forward, we hope to be able to continue to share our discoveries and the fruitful interviews that the program will no doubt continue to yield.

*Wireless microphones systems come in different RF carrier wave frequency ranges. Usable frequencies are regulated and vary by country and region. It is important to verify that the range of any equipment being considered contains some of the available frequencies in the region of its intended use. Sennheiser provides a tool for determining this in the U.S. on their website which can be found here.

END_OF_DOCUMENT_TOKEN_TO_BE_REPLACED

[…] Smithsonian’s Digital Asset Management System (DAMS) for their hosting and archiving needs. An overview of the recording equipment repurposed and purchased by the Hirshhorn was provided by Nick Kaplan, Collections Assistant at the […]