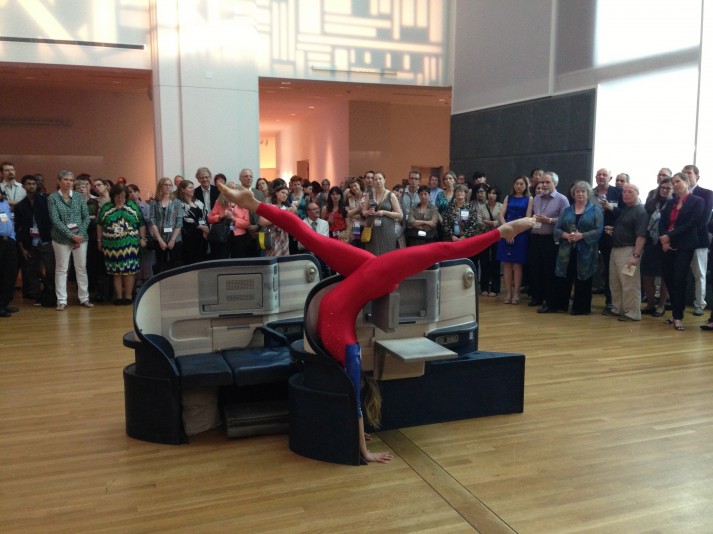 Allora & Calzadilla’s Body In Flight (Delta) being performed at the AIC Opening Reception held at the Indianapolis Museum of Art – May 30, 2013

Blog Post contributed by Steven O’Banion, the Smithsonian Conservation Fellow at the Hirshhorn Museum & Sculpture Garden in Washington, DC. Steven is also a member of the VoCA Program Committee.

**For those who could not be in Indianapolis for the panel discussion or performance of Allora & Calzadilla’s work, you can watch the video via this link.

The theme of the 2013 American Institute for Conservation’s (AIC’s) 41st Annual Meeting in Indianapolis was The Contemporary in Conservation.  Given the topic of the meeting, it was the perfect setting for a program focusing on performance-based art that was jointly organized by the Indianapolis Museum of Art (IMA), AIC, and VoCA.  The panel discussion, titled Moving Responsibilities: The Care of Performance-Based Sculpture, used the work of the artist collaborative Jennifer Allora & Guillermo Calzadilla as case studies to delve into questions about collecting, exhibiting, and conserving performance-based works.

In the U.S. Pavilion at the 2011 Venice Biennale, the IMA presented six new pieces by Allora & Calzadilla.  Among the works unveiled in Venice were several performance pieces, including Body in Flight (Delta) and Body in Flight (American).  These works feature wooden replicas of business-class seats from the respective airlines, which serve as apparatus for gymnasts from USA Gymnastics.  In Body in Flight (Delta), a female gymnast performs a fluid balance-beam routine, which contrasts the power-driven pommel horse routine performed by a male gymnast.

The IMA acquired Body in Flight (Delta) and first exhibited it in their Efroymson Family Entrance Pavilion in 2012.  Sadie Wilhelmi was one of the original performers of the piece both in Venice and the 2012 IMA exhibition.  In addition to performing Body in Flight (Delta) at the 2013 AIC Opening Reception at the IMA, Sadie also participated in the panel discussion along with MoMA time-based media conservator Glenn Wharton, IMA conservator of objects & variable art Richard McCoy amd IMA curatorial fellow Anastasia Tinari. 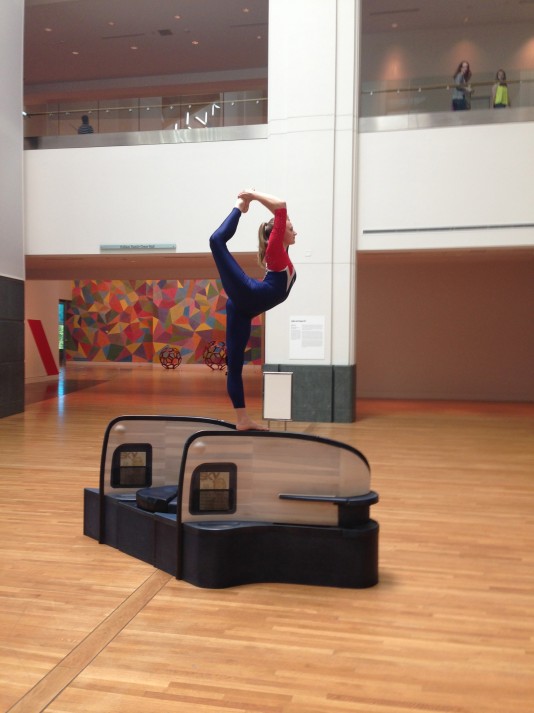 The discussion was kicked off by Glenn Wharton who talked about his efforts to care for Stop, Repair, Prepare, another work by Allora & Calzadilla that is in MoMA’s collection.  Glenn explained that MoMA is essentially creating an archive relating to the Stop, Repair, Prepare from which people in the future will be able to draw.  He also pointed out that performances allow for the unique opportunity to ask questions of the artwork itself – referring to the fact that the performers are a critical resource in documenting and preserving a work.

After discussing Body in Flight (Delta), Anastasia Tinari stressed that preserving a performance artwork mandates a case-by-case approach.  This work-specific method was echoed by Richard McCoy as he informed the audience that the IMA’s documentation of Delta includes 17 YouTube videos about the piece, in addition to a video of Sadie verbally describing and physically demonstrating every movement of the performance, step-by-step.

Sadie’s insights about collaborating with modern dance choreographer Rebecca Davis and athlete coordinator David Durante to bring the work to life added richness to the panel discussion.  For instance, she explained how eye contact with the public became a big part of the piece, which was something for which her rehearsals at a circus school hadn’t prepared her.  Sadie highlighted the physical demands of this performance.  The artists had originally wanted a 25-minute routine, which is many times longer than a typical gymnastic routine that lasts just a couple of minutes.  The compromise was a 17-minute marathon with a few breaks built into the choreography.  Sadie’s comical anecdotes, such as her description of a performance during which one of the seat belt buckles broke off and went flying into the crowd, elicited laughter from the audience.

The question-and-answer period resulted in engaging dialogue.  Joyce Hill Stoner referenced a conservator’s ethical duty to keep detailed records of a performance-based work by proclaiming, “to not document is not reversible.”  Others drew comparisons between performance works and Native American Masks that must be kept alive through dance.