Returning writer Hannah Sage Kay studied modern and contemporary art at NYU’s Institute of Fine Arts and Bard College. Her writing has appeared in The Brooklyn Rail, Carla, and Nka Journal of Contemporary African Art, among other publications.

Sharon Lockhart’s recent solo exhibition at Gladstone Gallery in New York, on view from January 13 to February 26, 2022, was above all else marked by duration. Having expanded her practice to include painting and sculpture alongside her characteristic photographs and videos, Lockhart’s new work expounds upon the passing of time—in the space of the gallery and the world beyond its walls.

Within each of the three rooms that comprised the exhibition, the artist employed a different media to explore the contours of a shared theme. The first and largest space featured eight large-scale paintings or, one might say, quasi-photographs—canvases primed with Procion dye, coated with cyanotype, and exposed to daylight—hung at even intervals, such that their presentation encouraged the kind of quiet reverence endemic to a hallowed hall beset by darkened windows. Nearly as forthcoming as a starless night sky (to which they eluded), these Untitled works divulged upon prolonged inspection modulations in hue, opacity, and the suggestion of depth. To stand before one of these works, one became enwrapped in a heightened awareness of their own sensory faculties, and the evidential parameters of their vision. As bands of blue—cobalt, indigo, ultramarine—emerged from these seemingly black monochromes, one was compelled to turn to a fellow viewer and compare that which they perceived: were these variegations a trick of the light or merely a fact of the canvas after one’s eyes adjusted to a different spectral range? 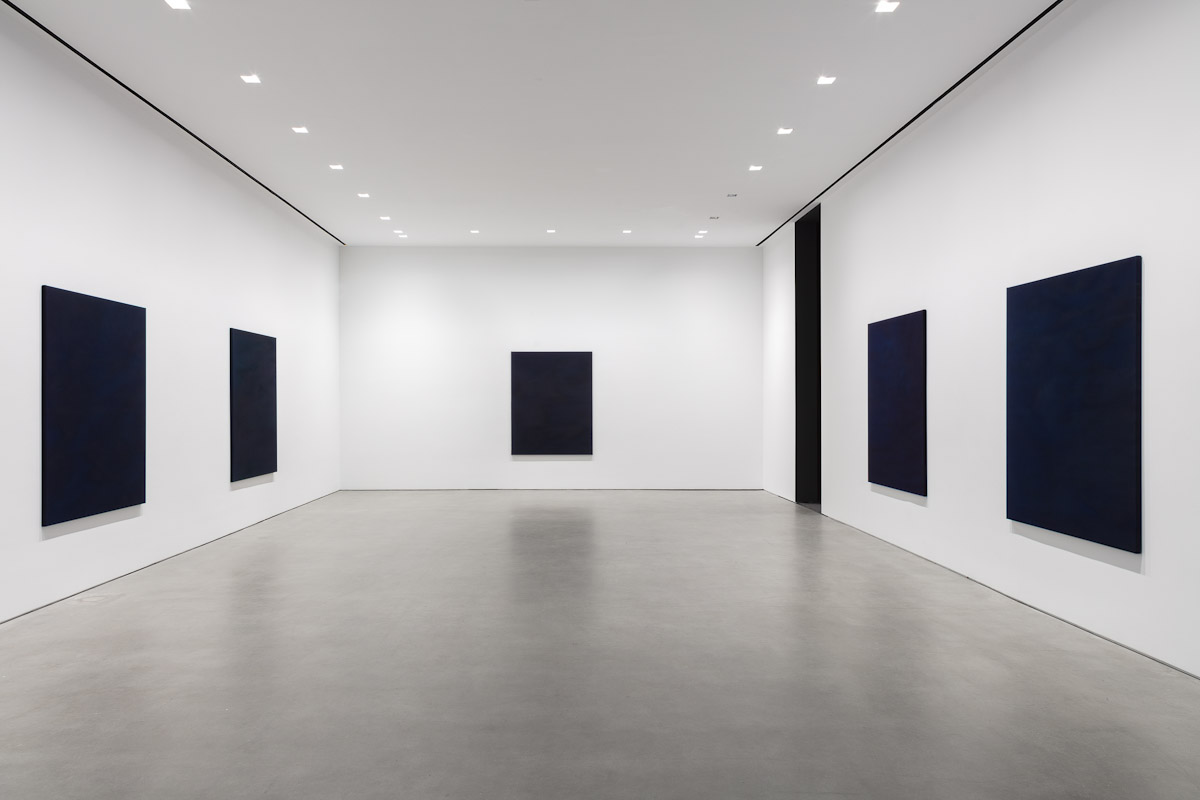 Such questions, whether spoken aloud or debated internally, led to a rather more existential consideration of our sensory fallibility, and a meditative focus on the role of doubt in structuring experience.

Progressing into the quiet, darkened space of the second chamber, one did not so much ponder the truthfulness of their own vision, but rather the unknown object for which its ever-roving gaze seeks. Necessitating that the viewer’s eyes again adjust, this room featured blackened walls, a lower ceiling, and no light, save for that emanating from a single projected video. Titled EVENTIDE (2022), Lockhart’s video documents the transition between day and night in a single 30-minute shot of the shoreline in Gotland, Sweden during the annual Perseid meteor shower and features six figures roaming the rocks, sand, and dunes by the light of, what looked like, their cell phone flashlights. 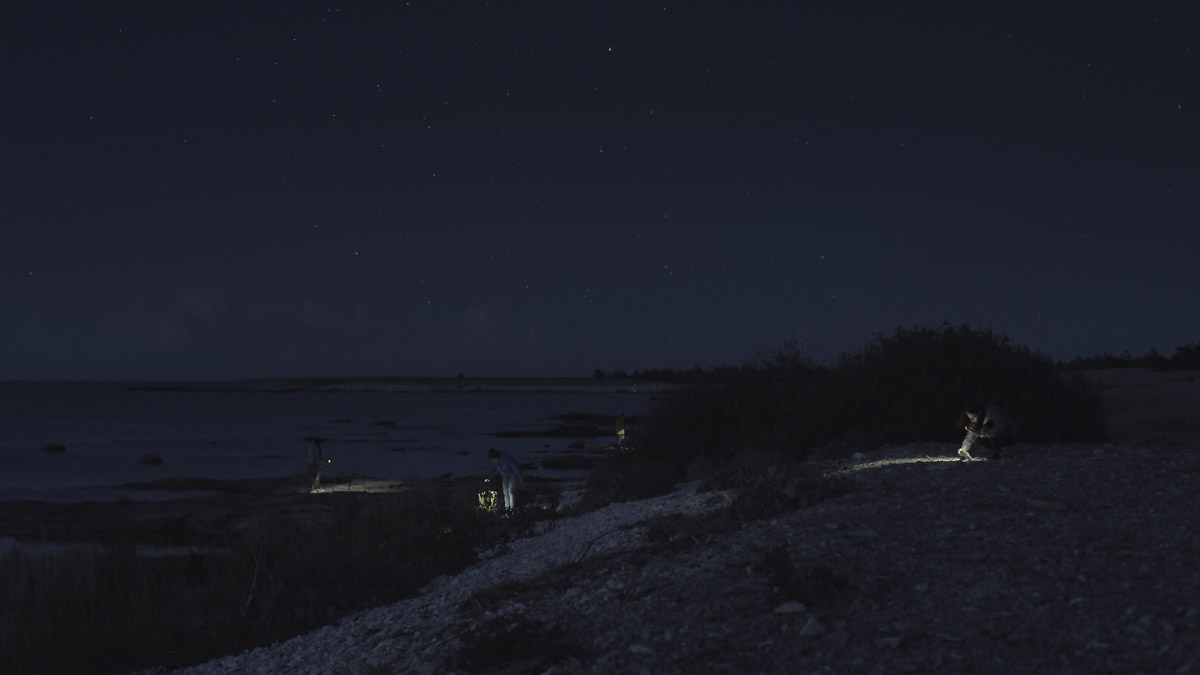 Just far away enough from the camera to abstract their visages, and teetering on the cusp of something unidentifiable, these figures appeared to be teenagers searching perhaps for a path forward, a light or a clue in the oncoming darkness. Their circuitous trajectory around the rocks, over the sand, in and out of frame could be regarded as aimlessness, but it may also be reflective of the patience and calm needed to exist in an age characterized by the unknown—a prolonged, adolescent state of transition in which our inner and outer selves change in a manner that is both consuming and completely out of our control. Has such a feeling not expanded to envelope the world at present?

When the video concludes, shrouding the viewer in greater darkness, a brightly lit room at the end of the exhibition’s final corridor beckons. There, a photograph of two whiskey jugs—one sprouting vibrant, kelly green foliage and the other shattered—on a black, horizonless background serve, in conjunction with the same jugs cast in bronze on a nearby plinth, as an ode to Mike Kelley on the tenth anniversary of his death. The image, created by Lockhart and her collaborator, Ikebana artist Tory Lowitz, captures a resonance of her departed friend and former mentor through the careful selection and placement of signifying objects. 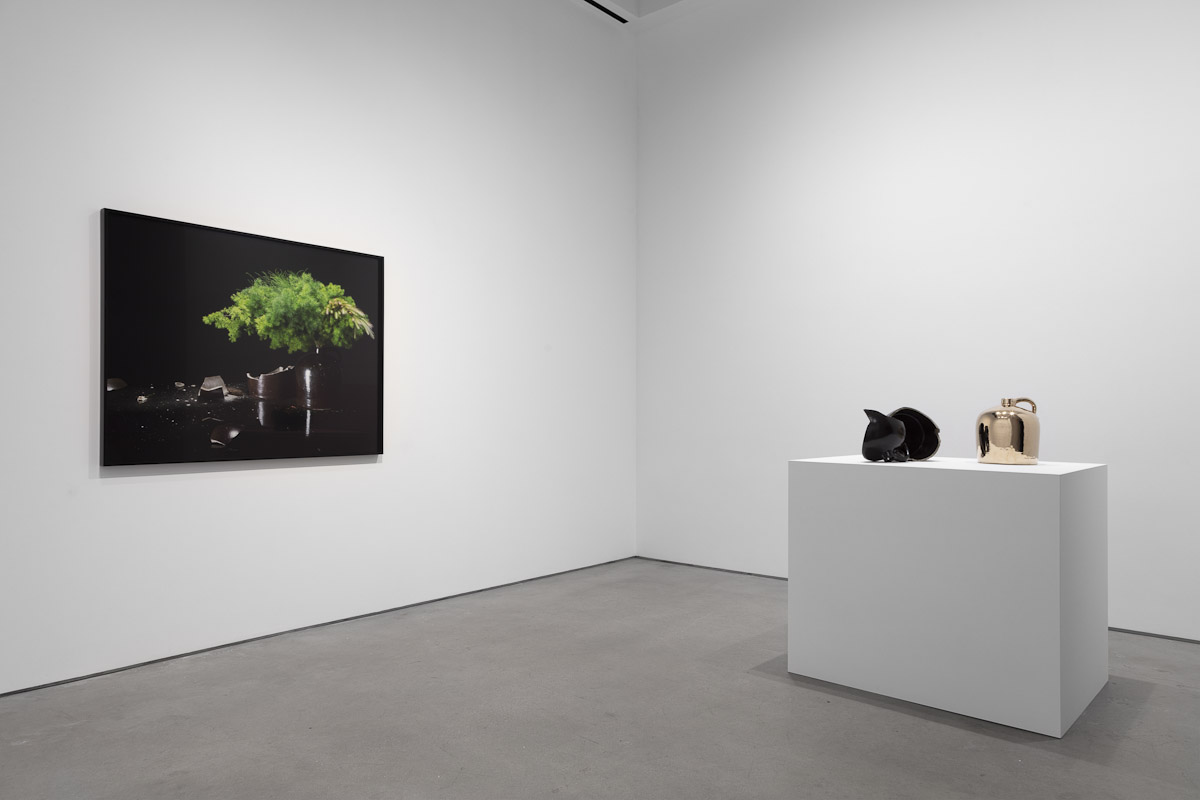 Representative of a classic, low-brow American affect for which Kelley was especially fond, Lockhart found the whiskey jugs to be an appropriate vessel to hold, symbolically not materially, those recollections of her former mentor which may otherwise evade coherence. When broken open, a daisy and a corn husk spilled forth from the left jug. This fateful appearance of Kelley’s favorite flower and an emblem of his favorite all-American holiday, Halloween, could be said to support Lockhart’s intuitively apt selection.[1] And yet, a multitude of connections could undoubtedly be teased out—between the shape and patina of the chrome jug and Kelley’s Kandor bottles, between Lockhart’s arrangement of vessels and Kelley’s talking ceramics in EARP #36B (Made in England), between Lockhart’s pairing of a photograph with its material subject and Kelley’s longtime practice of doing the same.

Obvious to some and arcane to others, Lockhart seems to embrace the varying (il)legibility of such connections, saying:

“Since I shared his interest in the role of class in American popular culture, I would be happy if the work was legible to the widest possible audience. On the other hand, the first person I sent this image to was Howard Singerman, who has written extensively on Mike’s work, to see what his take was, and I was super happy that he picked up on all the elements I included and added some things I had only subliminally thought of.”[2]

“The gesture of creating this work was” as Lockhart says “to share with others who knew him, and for a wider audience who may not have known him”—cinching the fact that what seems to matter most is not whether one can identify the specific symbols Lockhart has arranged but to appreciate that we can forever recognize the presence of our friends and loved ones in the world around us, and continue to commune with them outside of time’s sad strictures.

In attempting to arrest the inevitable, extraordinary preservation measures are often taken to stay the physical instability and corrosive change experienced by those objects that serve to extend our existence, though immaterially. Something cosmic in Lockhart’s exhibition, however, dredges up a primaeval understanding that while such efforts are admirable acts of love, care, and memorialization, it might also be okay to break open the jug, look up at the sky, and let time’s proclivity to bear forth change take its course.

To be absorbed in the steady stream of passing time—each minute neither stretched by boredom or quickened by distraction—in Lockhart’s exhibition imparts the inordinate responsibility of fully embracing each minute, of sinking into each moment and ensuring that the lights, colors, and shapes passing before our eyes are those that are truly worth seeing.

[1] This anecdotal information about Mike Kelley was acquired through a conversation with Sharon Lockhart and during my time working at the Mike Kelley Foundation of the Arts in Los Angeles.

[2] A brief exchange was conducted with the artist via email.