Today, I would like to take a moment to remember an incredible artist and VoCA supporter, De Wain Valentine, who passed away recently at the age of 86. I am truly saddened to think of a world without De Wain but I am grateful that VoCA had the pleasure to host two VoCA Talks with him.

Our paths first crossed in 2013 because Conservation Scientist Tom Learner (current Head of the Getty Conservation Institute’s Science Department and a VoCA board member at the time) had just finished working with De Wain on a years-long conservation project of his seminal work Gray Column. The process culminated in a beautiful documentary made by the GCI that VoCA was fortunate to host screenings of at the Guggenheim in New York City and the National Gallery of Art in Washington, DC. In both locations, following the film screening, Tom spoke candidly with De Wain about his life, his artistic practice, and his thoughts on the preservation of his work. If you watch the VoCA Talk, I trust you will see the deep respect and friendship that Tom and De Wain shared. It struck me at the time that the relationship between a conservator and an artist could be truly transformational to the artist’s legacy, and sincerely influenced my perspective on the importance of such collaborative work.

In addition to being warm and jovial, De Wain was innovative, forever finding new ways to blend creative endeavors with the scientific. When he wanted to create large scale sculptures from polyester resin, he worked with scientists to formulate a new type of resin to do so. He had a vision in mind, and, like all true artists, he worked tirelessly to realize it. When discussing the role of trial and error, and the exacting – often dangerous – nature of the materials he worked with, he said: “Everything had to be consistent, so I kept very astute notes of the whole process… and to make mistakes making a small piece is one thing, but to make a [big] mistake… It was very painful. … but I think all artists do it. If there’s something they want to see, they figure out how to get there.” De Wain Valentine certainly got there, and it was VoCA’s honor and a pleasure to have been a stop on his journey.

Below is an excerpt from De Wain’s VoCA Talk, held at the Guggenheim Museum in 2013, that highlights his thought process and pioneering approach to art-making.

LEARNER:  I mean, I know it’s hard to say, but were you a perfectionist in the surface? Were you trying to get the most perfect finish, flat finish as possible? Or was there a point where you just thought, this is good enough, this is great?

VALENTINE:  My interest in the surface and perfecting the surface was to the extent that stuff on the surface wasn’t taking away from being able to see the piece without seeing, oh, that’s a bunch of scratches, and be able to go inside of it as well, and be involved in that transparent colored space. Because what I was thinking about the whole time was wanting to have some magic cutting material that I could cut up a big piece of L.A. smog at sunset and show you what that was. Or cut a big piece out of the ocean and show you what that was. And it was a way of objectifying those kind of feelings about that transparent colored space. And the surface had to be clean enough that it wasn’t a point to dwell on, both sides of the surfaces, so that you could see the piece and into it and beyond it. 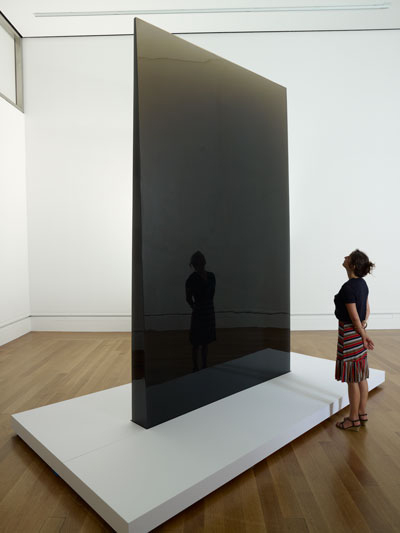 LEARNER:  And so I mean, that takes us very nicely into what became really, the focus, I think, of our project, the movie: how shall we display Gray Column? I think we both agree that a damage to the surface, a scratch, is disturbing, and if it can be treated, that’s great. But this idea of the polyester has a natural—or synthetic, but it’s a natural synthetic—aging character. This resin has a weird phenomenon, where it moves around a bit and these ridges can form on the surface. And we’re obviously polite to each other in the movie there, but it was a sticking point for a while. You know, you had a fear, I think, that that surface would negate the piece, and we wanted to kind of almost use the piece to highlight some of the issues that we’re faced with. And we came together, but just talk us through some of that issue.

VALENTINE:  Yeah, it was my first experience with this, really. The resin is always, in its hardened state, is always a liquid, as glass is always a liquid. It’s a solid state liquid. But polyester moves around more than glass does. And it develops surface anomalies, which I call grow-outs, from the resin, which keeps— And the interior and the surface will keep moving. So after about forty years, that stops. And I sand them out and re-polish them. And it was the first time I ran up against conservationists, which said, “Oh, no, we don’t want you to re-polish them. We want you to see what they look like now.” And so they— get them and— They want to see what happened.

LEARNER:  This is the surface of Gray Column. And you could really see this orange-peel ripple effect when you looked into the light. And originally, it would’ve been flat… So it was the discussion about at what point— You know, what tolerance do we have for some kind of change with age, compared to when it becomes so disturbing you really can’t see the piece without just looking at these sort of grounds, yeah.

LEARNER:  …And you know, we’ve had this discussion so many times, and it’s been a really interesting almost case study, where talking to— It could be anybody; in this case, an artist. You can ask the same question many times, and sometimes you get a different answer back. And the key to trying to figure out within the parameters, why certain things have been said. And is it because you’re in a great mood one day and a bad mood the other day, or you’ve sort of changed your mind? All these kind of things. It’s really hard for us to get inside. But this has been a really good example of that, because there’ve been times where you have said, “This is just natural aging,” and other times where you said, “No, it has to be removed.” I suspect in the end, there was a little bit of fear about what the piece would look like when it went up and actually, when you saw it. And I think everyone felt the same. You didn’t see this until you really looked for it. But can you just talk a bit more to that? You know, that feeling until you saw the piece, and the nervousness that it might look off, et cetera?

VALENTINE:  Well, one might say at that time, I just wasn’t at a point in my technical development to get as perfect a surface as I might choose to now. But at the same time, one of my assistants said I didn’t want to take it to the point where it was too perfect and like it was too machine done. It is machine done, but you can see that that machine is handheld. It’s not held by a tool, an automatic moving tool. Now I’m more prone to get it really flat. But at the time, as Tom says, it was a certain time, and that was all I knew how to get. I didn’t know how to get beyond that, so that was perfect at that time. 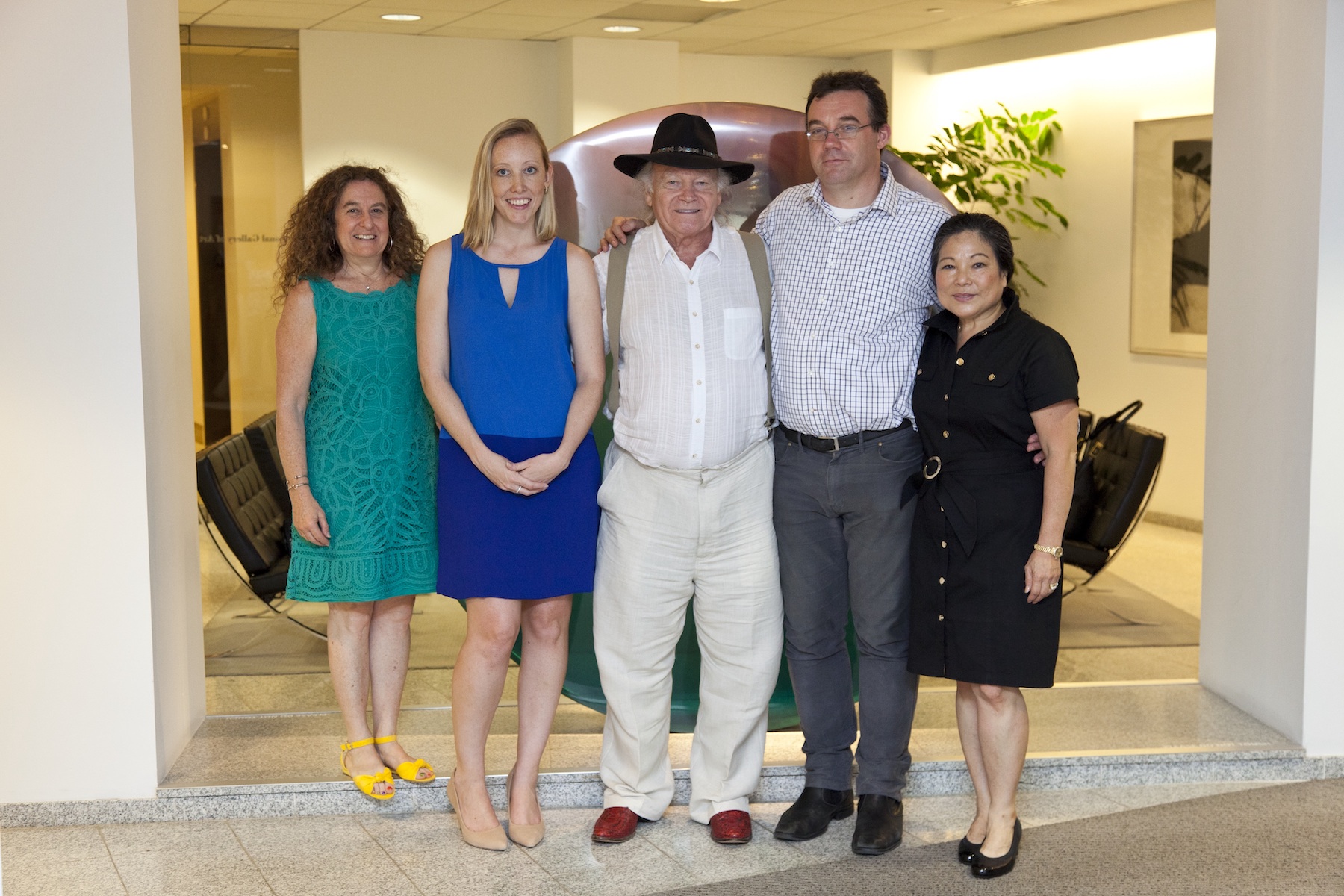 To request the full transcript of the Talk, reach out to VoCA’s Program Manager at margaret@voca.network.