Shuyang Chen is an undergraduate student at Northeastern University pursuing a BA major in Art with a concentration in Visual Studies, and minor in Media and Screen studies.

In A Room of One’s Own, Virginia Woolf writes, “There is no gate, no lock, no bolt that you can set upon the freedom of my mind.” Realizing no one can truly lock up one’s mind is the first step, and the next step is building an order inside the mind to create a balance of one’s own. Eventually, the freedom and strength of one’s mind can generate a tender yet powerful energy that changes oneself and the world around them. In her first solo show in the U.S., Valkyrie Mumbet, Portuguese artist Joana Vasconcelos explores the creative potential of such freedom, connecting personal and collective histories to celebrate women’s strength by showing underrepresented historical figures and objects while starting a conversation about slavery and social change. 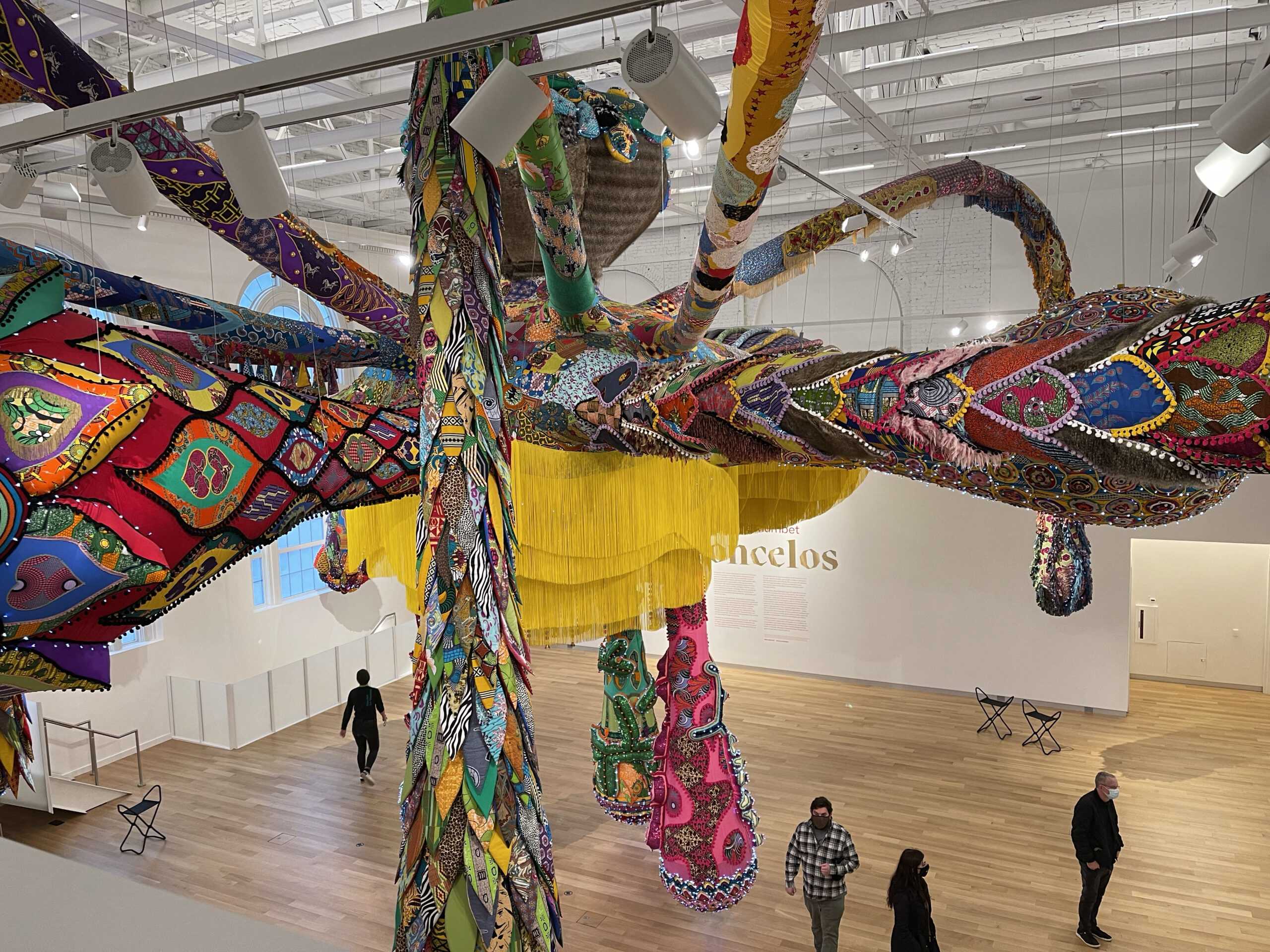 Valkyrie Mumbet, on view at MassArt Art Museum through 2022, is a large-scale installation made of various colored textiles, including crochet, lace, fabric, velvet, cotton, and polyester, all decorated with distinctive ornaments such as pom poms, LED light strips, and decorative gems. The installation hangs from the ceiling of the gallery space across two floors, like a grand, giant colorful octopus opening its “arms” to embrace the audience and invite them to enter its world. Four arms hang vertically on the bottom, each featuring a particular color palette of blue, green, yellow, or pink. Also, about ten thinner and more colorful arms stretch horizontally across the top of the installation, all attached to a central round figure capped with blue, green, and yellow patches. Not only is the installation colorful and well-structured when you look from a distance, but the carefully distributed gems, sparkling light strips, and other exquisite details make it very fun to observe closely. Despite its large and somewhat intimidating scale, Valkyrie Mumbet employs colorful textiles, fabrics, and unique decorations to create a sense of welcome and inclusiveness.

Known for her sculptural pieces that explore feminist ideas, Vasconcelos’s Valkyrie series is comprised of thirty-one large-scale site-specific multimedia installations dedicated to influential women, goddesses, and real-life heroines.[1] The series is named after the Valkyrie, a group of goddesses from Norse mythology who have the power to determine other’s fates in battle. In Valkyrie Mumbet, the artist pays respect to Elizabeth “Mumbet” Freeman, the first enslaved woman to sue for her rights of freedom based on the Massachusetts constitution in 1781. The installation’s large scale visualizes Mumbet’s courage and her significant contributions to the abolition of slavery in Massachusetts, inspiring her generation and today’s public. The entire room is filled with colorful textiles that symbolize the power of Mumbet’s mind and her influence on the world. By constructing the Valkyrie out of textiles, a medium which has historically been stereotyped as “feminine” and “craft” work rather than fine art, Vasconcelos weaves together individual and collective histories to celebrate women’s labor and freedom; challenge biased gender roles; and generate conversation about slavery, colonialism, and social change.

It is also worthwhile to note that much of Valkyrie Mumbet is constructed out of a fabric named Capulana, a textile from Mozambique that reflects the international trade and production of the fabric from the colonial era to the present day. The Capulanas were monopolized by the European traders, mass-produced by slaves, and sold across Africa: “The cloths exemplify the fluidity of cultures and reflect a complicated and intertwined history of cultural exchanges across continents, as well as the legacy of European exploitation, colonization, and slaveholding.”[2] Mozambique was a former Portuguese colony in Africa where the artist’s parents were raised, and many of the Capulanas used in Valkyrie Mumbet are from the artist’s vast personal collection of textiles from around the world. [3] To Vasconcelos, Capulanas play an important role in how she and her family are connected to the transatlantic slave trade, and in turn connect her own personal history to Mumbet’s story. By choosing to create a patchwork out of the colorful, patterned Capulanas, Vasconcelos is able to bring forward the complexity and duality embedded in the fabric, and sew together a collective history into a single vibrant, breathtaking sculpture. 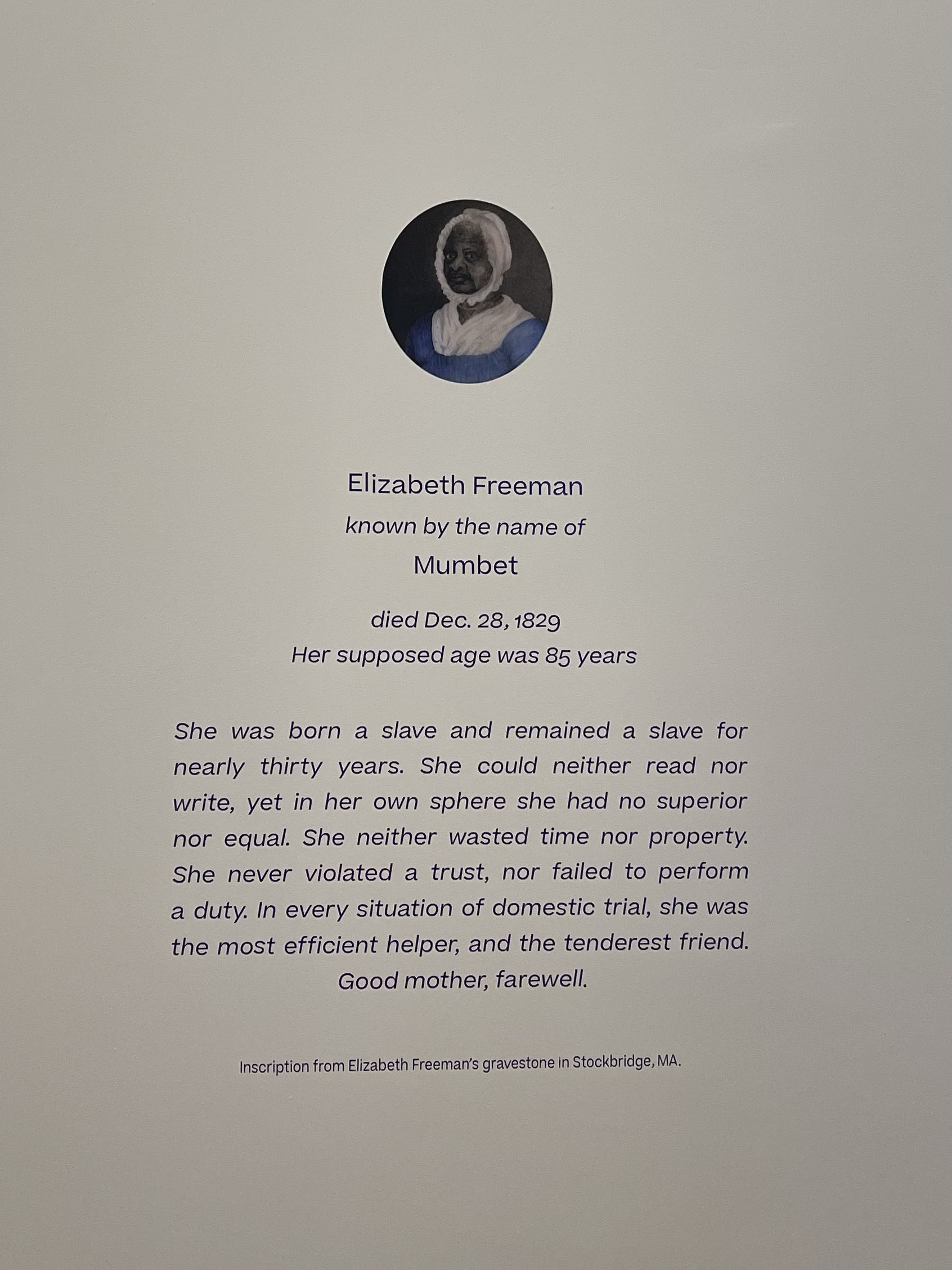 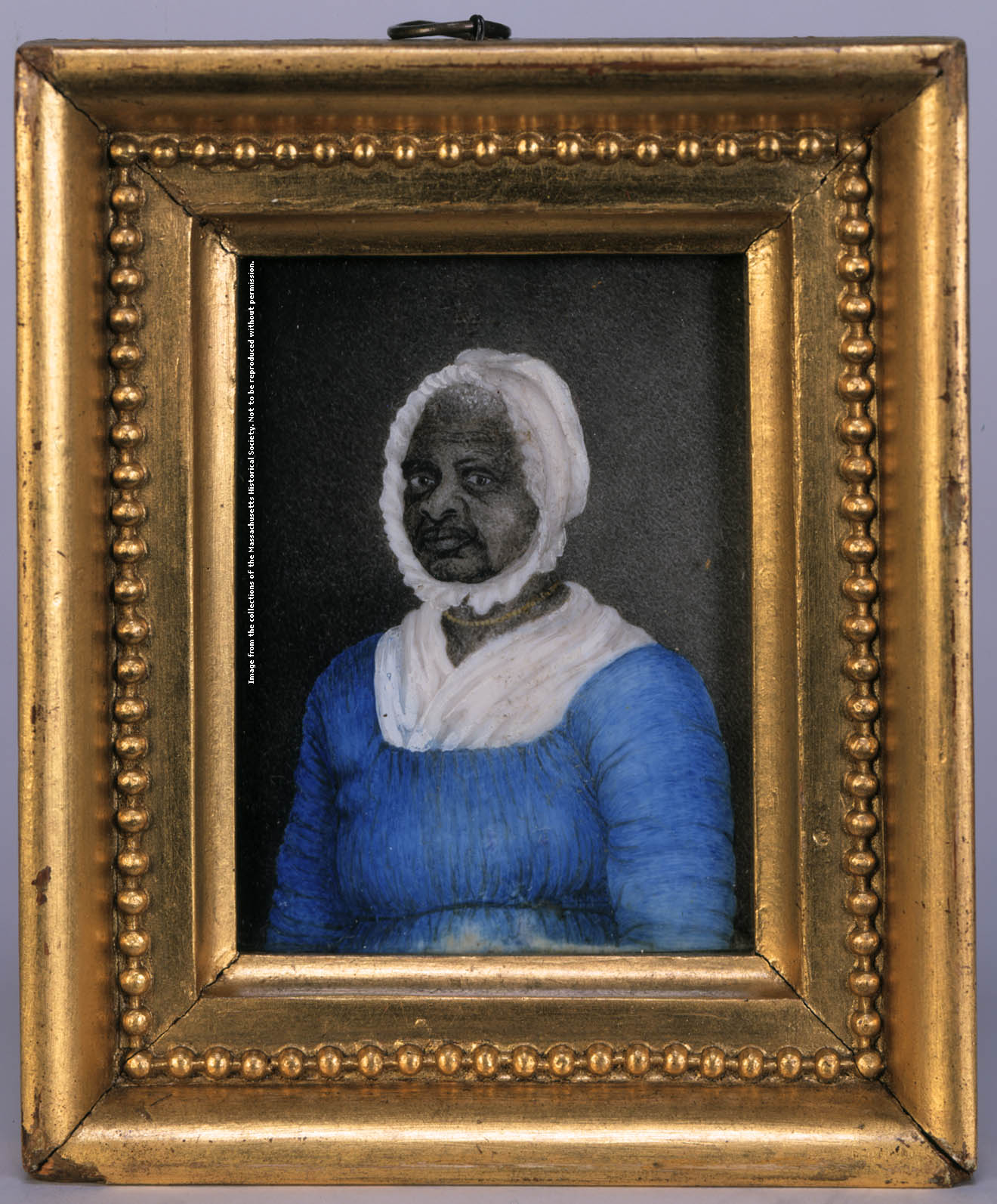 In Valkyrie Mumbet, Vasconcelos also makes “a connection across space, time, and cultures, with a woman she admires” in order to inspire contemporary audiences. After Mumbet won in court and gained her freedom, she worked as a paid domestic servant, nurse, midwife, and healer, finding ways to support herself while caring for other people as a strong and independent maternal figure in her family and community. Also, “extraordinarily for any woman of that time,”[4] she eventually saved enough to purchase her own home in Stockbridge Village, Massachusetts. Vasconcelos celebrates these achievements in numerous ways, perhaps most obviously in the only purple “arm” with yellow pom poms surrounding its end that echoes the necklace of gold beads shown in Mumbet’s portrait reproduced on the gallery wall. The painted portrait presents Mumbet in a half-length format, turned slightly to her right, wearing a blue dress typical of the Federalist period, with drawstrings at the neck and waist, a white cap, and a gold-beaded necklace. The portrait was painted in 1811 by Susan Anne Livingston Ridley Sedgwick, the daughter-in-law of Theodore Sedgwick, the lawyer who helped Mumbet sue for freedom in court.[5] Later, Mumbet chose to work at the Sedgwick family household as a senior servant and governess to their children until 1808. After the Sedgwick children were grown, she left the family and moved back to her own house to live near her daughter and grandchildren.[6] 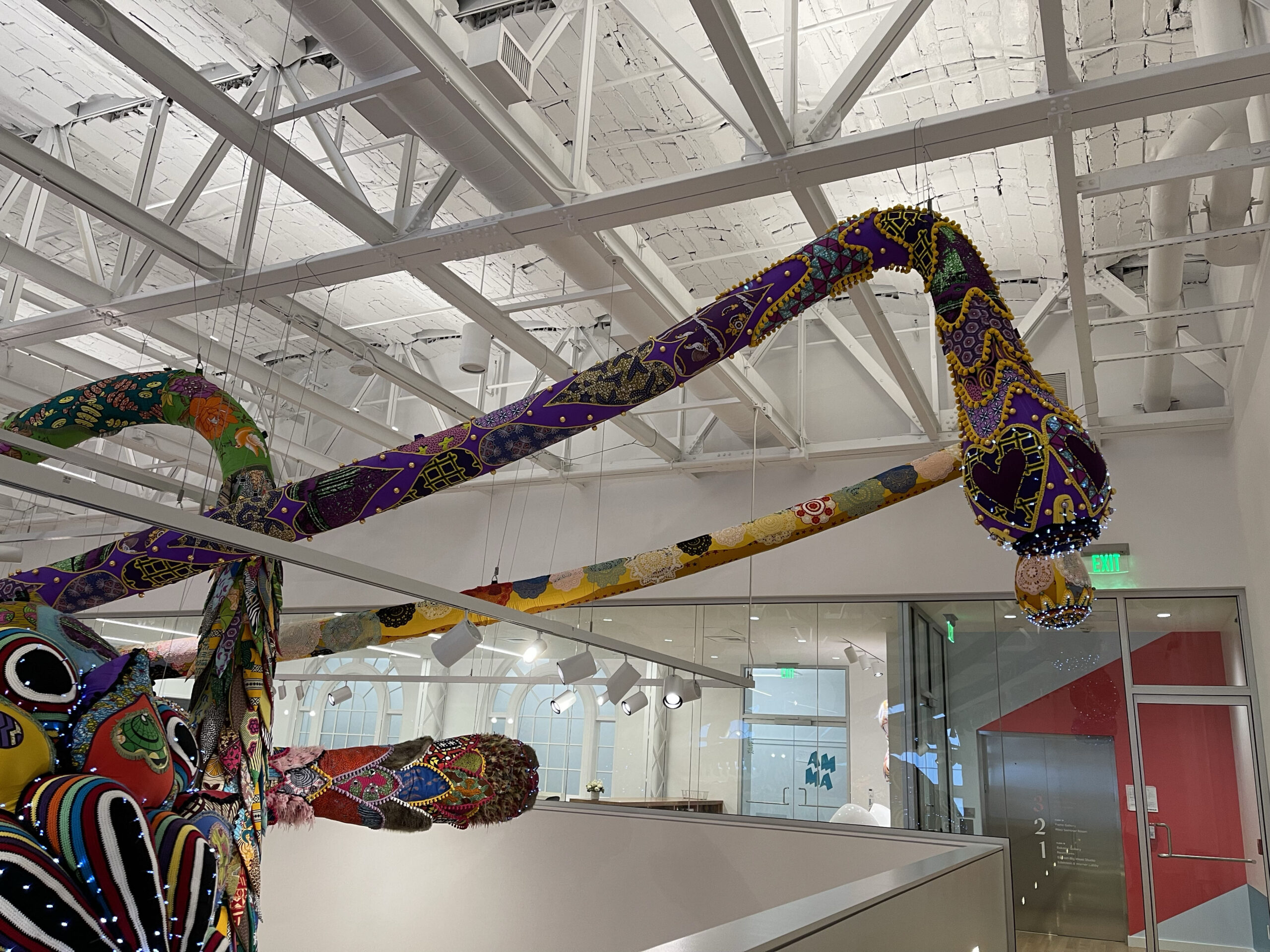 A photograph of the “purple arm” of Valkyrie Mumbet. Photo by Shuyang Chen. 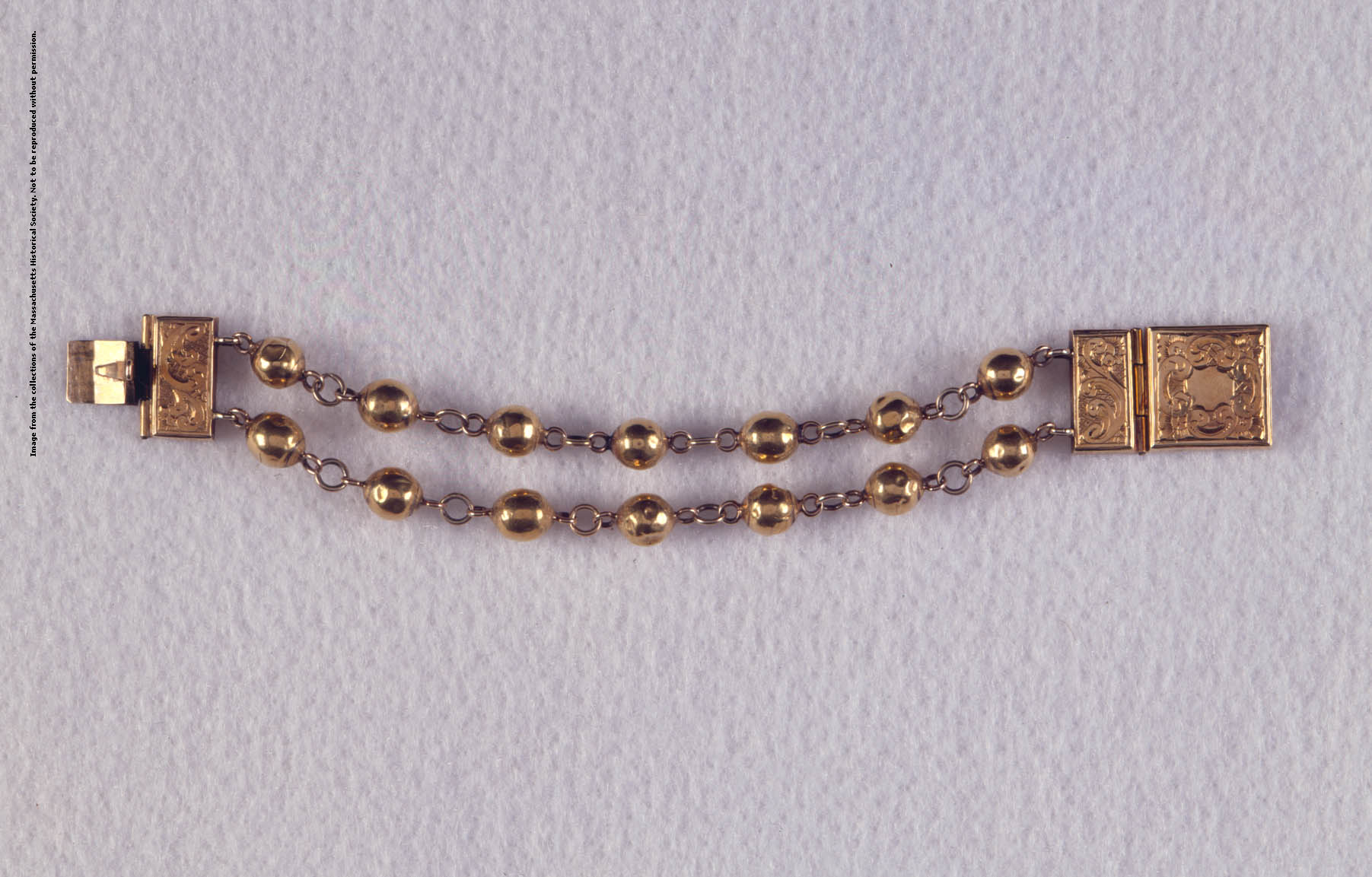 Although the installation has many other patterns and shapes, such as circles, triangular, and leaf-shaped flags, the arm with yellow pom poms features a unique heart-shaped patterned textile that is a special homage to Elizabeth “Mumbet” Freeman and her bravery. The yellow pom poms and metallic beads throughout the piece symbolize the gold-beaded necklace she wore in the portrait.[7] The decorative elements reference the possessions listed in her will that address her ownership and individuality, taking control of her life and benefiting other people. After she passed away, Mumbet left the necklace to Catharine Maria Sedgwick, one of the Sedgwick children she raised.[8] The heart-shaped patterned textile is representative of the loving, caring, happiness, and uplifting qualities Mumbet had and the positivity and encouragement she brought to the people around her. Acknowledging such an individual who suffered from and was able to overcome colonialization, slavery, and sexism flips the collectively constructed narrative inside out, reminding us of the underrepresented individuals who were wrapped up in larger historical discourse.

For Woolf, her mind is a room to write novels and a metaphorical space for her to speak up and be heard. For Vasconcelos, her mind is a space to create and express freely using the artistic mediums she likes. For Mumbet, her mind is a place free of oppression where she can live and be treated as equal as anyone else. There are destined to be countless ways to live, as many as there are all different kinds of people. Hearing other’s stories and expressions diversifies our imagination and possibilities of ways of living, encouraging us to make up our own rules and create our own order when the world has no place for us. Valkyrie Mumbet, taking over the entire gallery space, is a room of “our” own that invites viewers to connect with and reflect on the colonial past and the story and spirit of Mumbet. It inspires the viewers to contemplate the richness, stableness, and peace of a truly free mind and continue to construct an unconfined and powerful reality of their own.