This week’s returning writer, Hannah Sage Kay, recently received her Masters degree from the Institute of Fine Arts at New York University, where her research focused on the intersection of art and politics with regard to media manipulation, misinformation, and the construction of fictionalized (or alternate) histories.

The manipulative power of framing, and the blindspots—physical, optical, and political—that structure perception, take center stage in Theo Anthony’s most recent film, All Light, Everywhere (2021), which premiered at Sundance Film Festival earlier this year and was released in theaters across the United States in early June. A mind-bending foray into the shared histories (and vocabularies) of photographic and revolver technologies, the purported accountability of body cameras, and the spurious claim that surveillance makes us safe, Anthony’s documentary cycles through no less than five distinct narratives and, via their commingling, prompts viewers to observe connections underpinning topics as diverse as criminology, photography, eugenics, astronomy, surveillance technology, police accountability, and the right to privacy. 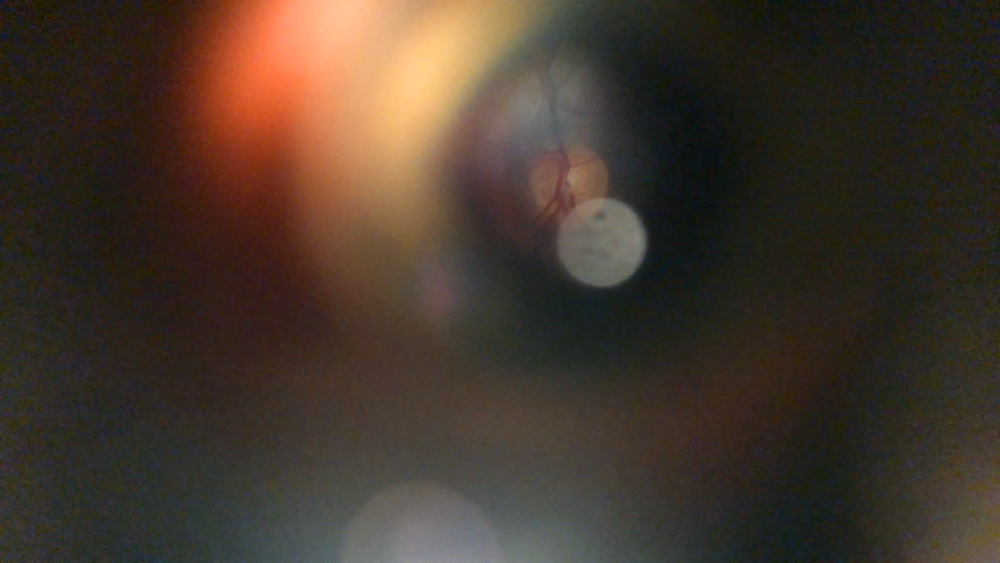 All Light, Everywhere begins by explaining that a blindspot exists at the juncture where the optic nerve connects the eye to the brain, one which is never perceived by the see-er. Since the brain seamlessly compensates for this perceptual loophole, humanity has firmly maintained the belief that senses (especially sight) are the most reliable means of acquiring knowledge about the external world. As the maxim goes, “seeing is believing,” though watching Anthony’s documentary prompts one to suspect that while we are thoroughly conditioned to agree that this is true, seeing is a far cry from knowing.

Sliding doors open to reveal a circular anti-chamber from whose depths a figure emerges, welcoming viewers to Axon Enterprises. This figure is Steve Tuttle, the company’s spokesperson, who gains entrance to the facility by placing his palm on a biometric scanner. But before leading viewers inside, Anthony asks Tuttle to repeat his entrance and adjust his choreography, an edit which prompts the viewer to ask: is everything scripted, who writes the script, and who’s perspective does the script reflect? Or as Keaver Brenai, the narrator in All Light, Everywhere, recites “when an image speaks what does it say, who gets to speak for it, and who does it speak for?” This question recurs throughout the film, blown open so wide that one begins to wonder if images, no less our senses, can ever be trusted.

Tuttle proceeds to tour Anthony and the camera crew around the company’s facilities, discussing the ethos behind their office space, technology, product demonstrations, and mission with considerable enthusiasm and a distinct flare for making altruistic claims about the tools that enable police brutality to sound vaguely credible, or at least momentarily bemusing. Looming over a factory worker examining body cameras, Tuttle explains that Axon designs its cameras to capture only what the human eye can see, no more and no less. Though presented as a highly logical, even self-evident means of documenting a police officer’s encounters—Tuttle says we wouldn’t want cameras to be equipped with infrared vision and able to disclose that a civilian was holding, for example, a child’s toy as opposed to a lethal weapon—it proves difficult to square this new information with the film’s previous segment about blindspots, and the ways in which our brains can deceive our eyes. 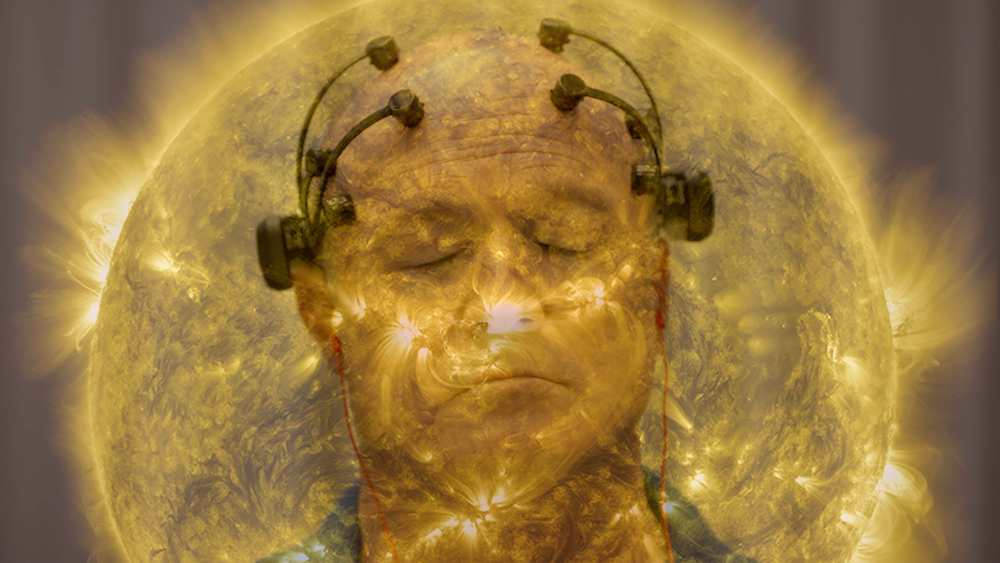 As the inventor and primary producer of tasers and police body cameras in the United States, Axon has concocted a useful narrative about innovation, openness, and public safety that it wields to commercial and propagandistic ends, as evidenced by Tuttle’s script and the all too similar rhetoric invoked by the police forces that use Axon products.

Anthony includes documentation of one such police force in Baltimore, Maryland, featuring a training session that took place for officers receiving and operating an Axon body camera for the first time. While the instructing officer continually emphasizes the camera’s objectivity, accountability, infallibility, and general security that it can provide to officers (and those with whom they interact) via the evidentiary nature of its documentation, Anthony unveils blindspots inherent to this device, and how distorted images engender a distorted understanding of reality. Viewers observe, through the eye of an Axon body camera, footage of an unnamed and unseen individual walking around an indoor shopping mall, gliding up elevators, surveying television screens, and talking to Anthony who occasionally appears on the side of the camera’s frame. Is Anthony present during the entirety of this promenade through the mall? The viewer has no way of knowing. The camera can only look straight ahead and, for that matter, its wide-angle lens severely distorts the field of vision, exaggerating movements and causing objects to appear much closer than they are. Everyone with whom the body camera interacts becomes an aggressor and the invisible body behind the camera becomes the biggest blindspot of all. Things happen to this passive individual, they are not caused by him or her: what could be the reactions of others are framed as unprovoked actions. In this case, the invisible body is the exonerated body.

The power dynamic established here between viewer and viewed is exacerbated by the fact that police officers are allowed to review the resultant footage before making a statement. This provides an opportunity for them to “refresh their memory” or align their story with what appears on camera. This practice proves all the more concerning when one learns from Kathryn Schulz in Being Wrong: Adventures in the Margin of Error that memory is highly mutable, and that not only do recollections naturally change and diminish with time, but that it is surprisingly easy to plant a fictionalized memory within one’s mind. Schulz explains that one in four participants in false memory studies readily accept implanted memories as indistinguishable from reality.[1] Since photographic documentation is widely considered to be more objective than our own memories, it is thus only natural for an officer’s recollection to conform to that which is recorded and to leave out that which is obscured.

How convenient that body camera footage often conceals more than it reveals. In a product demonstration, Tuttle aims his taser at a dummy criminal and fires. The image captured by the body camera is dominated by Tuttle’s arms which stretch out in front of him holding the plastic weapon, while the dummy with a grimacing expression drawn on its face is largely obscured. Here, the viewer’s position is akin to someone playing a video game: their first-person perspective absents a body but foregrounds a weapon and, by definition, anyone with whom they come in contact is rendered a villain. The distancing effect that this produces is one of alienation, of not knowing your villain (ie. victim) and not needing to. It’s easier to pass judgement in ignorance.

It’s also easier to pass judgement in secrecy, as All Light, Everywhere reveals when interviewing CEO of Persistent Surveillance Systems Ross McNutt, who sits at a multi-monitor computer screen scrolling back and forth in time through a seamless recording of Google Earth-like aerial footage. Anthony informs viewers via the narrator that without notifying either the mayor or the public McNutt’s private company (i.e. recording technology and an aircraft equipped with twelve cameras) was enlisted by the Baltimore Police Department to continuously document, in McNutt’s words, a “god’s eye view” of the city. Conceived as a means to track and theoretically deter crime, this surveillance system un-ironically revokes freedoms in the name of freedom. Less adept than Tuttle at performing a sincere interest in public safety, McNutt bumbles through ethically alarming rationalizations for its use, giving little consideration to the fact that people are barely distinguishable from dogs and bushes, and that wealthier suburban areas are more likely to be sheltered from the aerial surveillance by trees than urban areas which remain exposed. If this is “god’s eye view,” who is god, who does he pardon and who does he condemn? 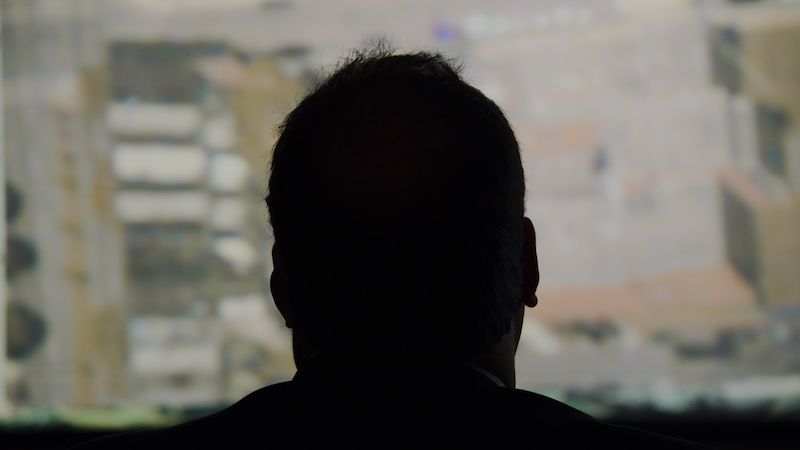 In A Conspiracy of Images: Andy Warhol, Gerhard Richter, and the Art of the Cold War, John C. Curley argues that works of art and surveillance documents are far more alike than they are different.[2] Curley says, “lacking a descriptive context, ambiguous images—even those produced as military intelligence—provoke whims of interpretative fancy, not unlike the inkblots of a Rorschach test.”[3] Citing surveillance images invoked as “proof” that Communist-controlled Cuba was housing nuclear weapons for the Soviets during the Cold War, Curley notes that John F. Kennedy originally admitted that he (much like the public) was unable to decipher these highly ambiguous documents without the assistance of captions and contextualization. The crisis of ambiguity made evident by these documents pervades all photographic records, no matter how sharp the image or wide the camera angle. Context, framing, and captioning often wield more power in determining what we see than the colors and shapes that comprise images themselves. French criminologist Alphonse Bertillon is quoted in All Light, Everywhere for having aptly observed that “The eye only sees in each thing that for which it looks, and it only looks for that of which it already has an idea.”

It thus behooves us, as it did Curley, to consider the similarities between art and espionage. Though many would prefer these two realms to remain wholly distinct, both ascribe meaning to form via interpretation, and force us to acknowledge the mutability and fallibility of our senses, our technologies, our records, and the stories we use them to tell.

As the film’s narrator observes, “every image has a frame, and every frame excludes a world beyond its edges,” the same is true of this here review. What has been discussed above reflects only a small fraction of Anthony’s project. So can these thousand plus words paint a full and complete picture of All Light, Everywhere? Absolutely not, and neither can the film document an entire history of any of its subjects. But, as Schulz observes, “dominium over perception is power,”[4] and Anthony, despite the unavoidability of making countless choices, is clearly cognizant of his role in the production of this documentary—a refreshing position which will hopefully engender a deeper reckoning in the genre of non-fiction filmmaking.