This week’s returning author, Betsy Andersen, is founding Executive Director of Museo Eduardo Carrillo (2000-present). During COVID she has returned to being a gardener with flourishing results.

The Califas Legacy Project, spearheaded by Museo Eduardo Carrillo, fills in a missing piece of American art history by focusing on the Chicano/a/x artists of the Central California Coast. Germinated in 2016, the Califas Legacy Project unifies the Monterey Bay Crescent through a public retrospective and multi-generational exhibitions, virtual opportunities, street-side art viewing, portable murals in a remarkable book format, documentary videos, panel discussions, and Latinx-based symposiums. The project spotlights artists Yermo Aranda, Amalia Mesa-Bains, Ralph D’Oliveira, and Carmen Leon, whose art and community participation has influenced generations. Every facet of the project will be archived and found here https://museoeduardocarrillo.org/category/news/califas-legacy. 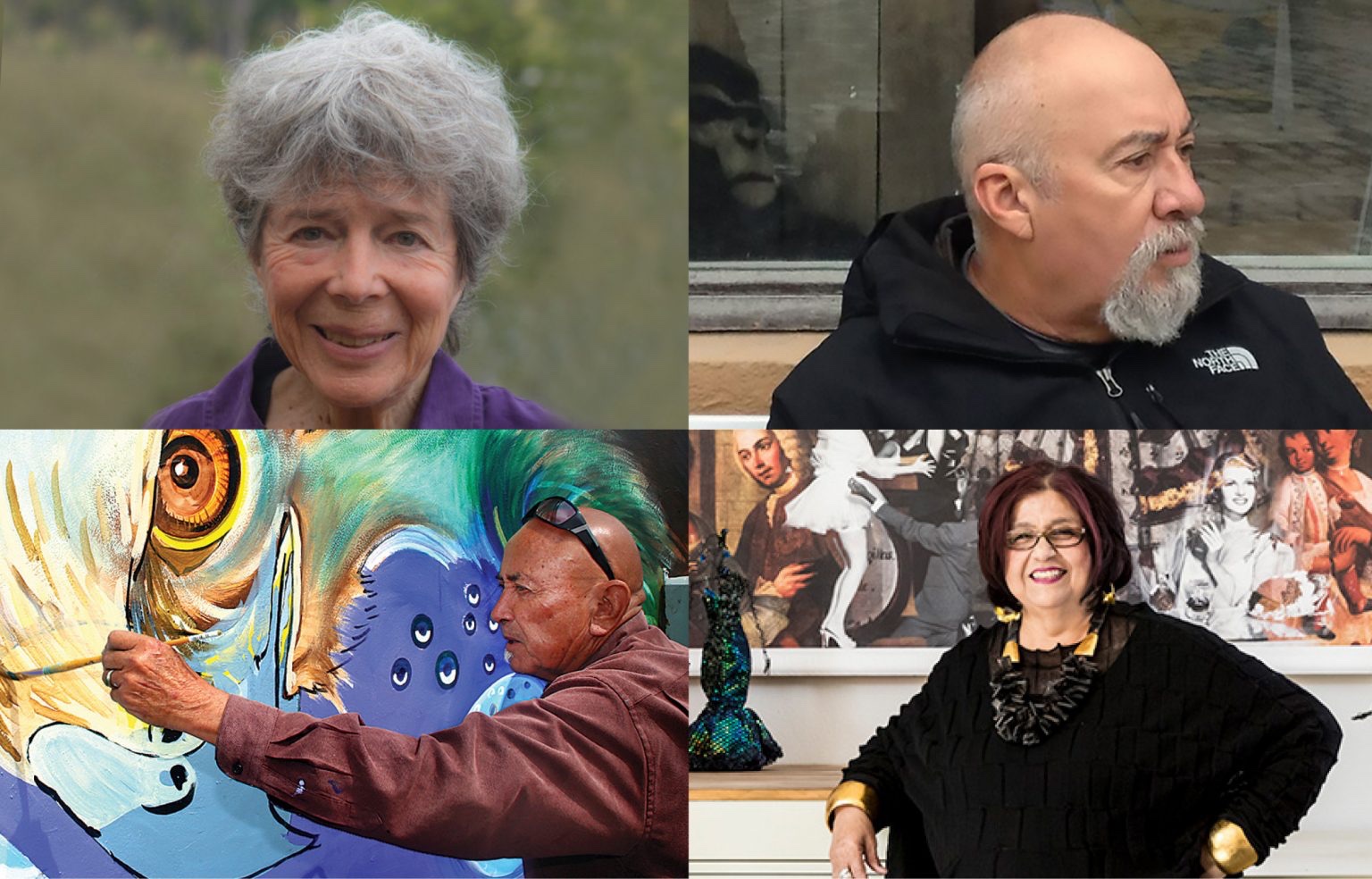 The Califas Legacy Project book, CALIFAS: The Ancestral Journey/ El Viaje Ancestral, is a permanent and tangible part of the project, co-published with book artist Felicia Rice of Moving Parts Press. Moving Parts Press has been publishing limited edition artists books in collaboration with Chicano/a/x artists and writers for over thirty years. Our collaboration grew out of a synchronistic conversation in the studio of artist Kay Metz. We were discussing the mural aspect of the project when Felicia said “I see that as a book.” A majestic accordion-fold book, designed and letterpress printed by Rice, became the platform for the artists to paint a moveable mural, with a shadow box cover by Mesa-Bains. But we wanted to make the books available to more people and so Rice designed a trade edition of 700 books which we distributed free of charge to schools, libraries, and youth-serving organizations. Funding for this trade edition was provided by the Arts Council of Santa Cruz County, Santa Cruz City Arts Commission, and Hit & Run Press. 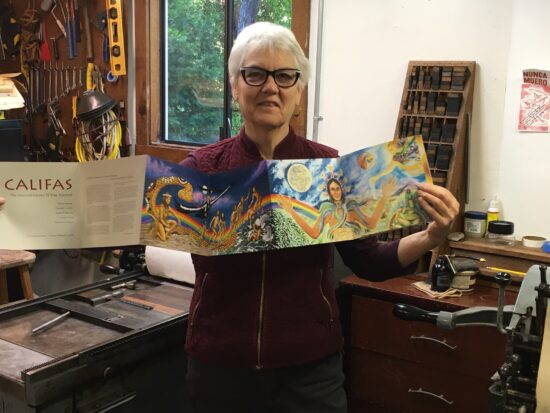 The Califas Legacy Project grew out of the Museo Eduardo Carrillo’s soul searching after the Aspen Institute study on Artist Endowed Foundations reported that Museo was the only foundation in the US devoted to the work of a Mexican-American artist. That has yet to change, even as issues of inclusion, diversity, equity, and accessibility have gained increased relevancy in institutions. So the Museo started exploring what we could do to fulfill our dual roles: first, as an online museum, and also as an Artist Endowed Foundation. It became evident that as a museum we needed to offer exhibitions and educational materials. As a foundation —and the only one of our kind— we asked ourselves how could we, in our unique position, remediate a disparity for people of color missing from the legacy building environment? Clearly, with this broad agenda, we needed to find our focus.

The Museo’s “On View” exhibition series aims to show lesser seen or yet to be seen artists.  We favor Chicano/a and Latinx artists because of Eduardo’s ancestry but we include others, too. As a Professor of Art at University of California, Santa Cruz from 1972-1997, Eduardo was recognized as a pioneer, influencing many Latino students as a role model for first-in-family to attend college. He was a bridge builder for others.

Once we began our series of online exhibitions —featuring Lorrine Garcia Nakata, Carlos Jackson, and younger Latinx artists— we also were made aware through our local Arts Council that resources about Chicano and Latinx art were slim to nil. Our role became clear: Museo could create free, downloadable materials for teachers, especially of middle and high school students, in order to provide access to the rich wealth of arts by these oft overlooked communities. Museo’s recognition of these gaps in American art history has roots in Eduardo’s experience as a student at UCLA in the late 50s and early 60s. He found limited information about Los Tres Grandes, the Mexican muralists, but this information was not taught in formal classes; Mexican-American artists, not at all. Fast forward to the present, it is not uncommon to hear from teachers, already pushed to the limit, that when they want to share work of a Latino/a/x artist they turn to…Frida Kahlo. So we thought “what about the contemporary Chicano/a/Latinx artists?” This query fueled Museo’s response.

We knew we could get materials and information into teacher’s hands which would allow them to show plenty of contemporary Latinx artists. We designed posters with images by the artists we exhibited, and included insights from the artists about their history and art, all free and downloadable. This is the Hablamos Juntos/ together we speak series, just one way in which Museo began to work to change the narrative.

As an online entity we feared we could be easily missed, so we began to identify local organizations with whom we could partner in order to connect our resources directly with teachers and their students. We found the Young Writers Program, an in-classroom literacy program, rich with trained mentors and low ratio student to adult allies. With them, Museo provided images of contemporary Chicano/a/Latinx art, predominantly figurative/ representational work by living artists in California. Each student had a unique image and wrote personal narratives that were inspired by the art. Through writing and revision, the stories gained life and reluctant readers became published authors based in Latinx art.

You may be asking about the word Califas and why the varied vocabulary. Califas is a term for California commonly used among Spanish/ English speakers. The word Chicano/a refers to people born in the US but of Mexican heritage. This word often has a political connotation and conveys a sense of pride. Latino/a covers a broader group of people who share speaking the Spanish language. The Spanish language conveys gender using a/o endings. Now in common usage the letter X has replaced the gender bound spelling conveying gender neutrality. 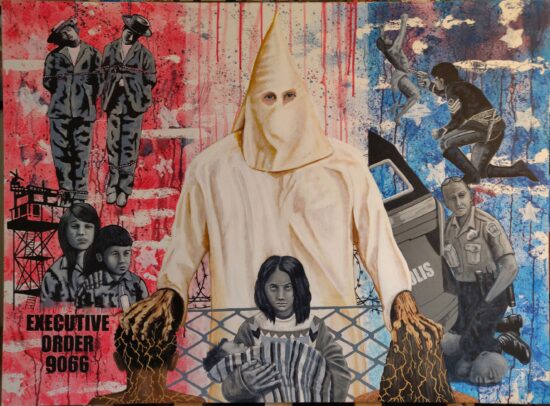 After publishing five books, the Young Writers Program and Museo decided to focus on a lesser recognized region: our own, the Monterey Bay Crescent. What could Museo offer based on these regional treasures, our Legacy artists? We could develop another way of learning—through videos— that are super accessible and immediate, and thus the Califas Legacy Project was born. The Califas Legacy Project videos found support through a grant from the Arts Council of Santa Cruz County. Because filmmaker Wallace Boss captured this moment in time, in the artist’s studios and in their own voice and cadence, a whole new audience could discover the artists. We also offer the videos with Spanish subtitles, to make sure that more people could have access to the work.

The Califas Legacy Project has grown in scope to include exhibitions and panel discussions. Our partners included Museums and galleries where you might expect to see artwork but we wanted to include places, like libraries and the internet, where people would easily come upon the art and access the videos. The pandemic has underscored the breaks in our systems and forced us to reconsider what we thought was a given: that everyone has access to the web. But not all students do. This may become one of the lasting and most positive changes that the COVID virus has provided us with: the need to question our assumptions and then remedy the inequities.