This week’s contributing author, Brooke Elmore, is a second-year undergraduate student at Northeastern University pursuing a BFA in Graphic and Information Design.  When she’s not studying art and design, she creates for multiple print publications on campus while also drawing unique digital graphics for her personal gluten-free blog.

At the 2020 Super Bowl in Miami, Florida, Deaf artist Christine Sun Kim stood beside Demi Lovato and performed the National Anthem in American Sign Language (ASL) for millions of people.  But Kim’s representation of the Deaf community does not begin or end with this performance.  Her multinational artistic practice spans from her birthplace in California all the way to her current home in Berlin, and has recently entered the Boston art community.  Off the Charts, on view at the MIT List Visual Arts Center from February 7 to July 19, 2020, deals with the complexity and multidimensionality of sound and language, and is deeply rooted in Kim’s experiences as a Deaf woman.

Kim’s work draws generative comparisons of communication systems that we intuitively know and practice, but her recent projects disrupt the seamlessness of spoken communication in such a way that makes hearing audiences reconsider their fundamental understanding of language and sound.  The multidimensional experience Kim has created at The List Center uses humor and biting sarcasm to critically reframe the familiar communication methods that both hearing audiences and those fluent in ASL may take for granted. Kim’s exhibition demands to be seen and heard on its own terms because it represents a perspective at the critical intersection of the contemporary art community and the Deaf community. 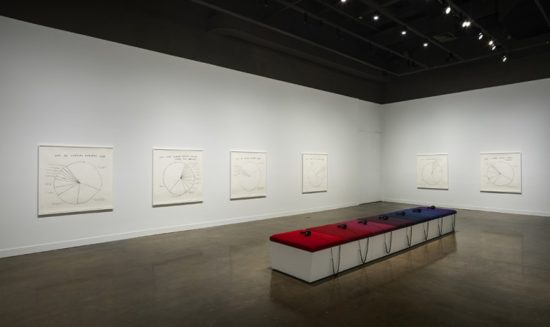 Visitors’ reconsideration of communication begins with the seven colorful cushions positioned in the center of the room, each accompanied by a pair of headphones.  All seven channels of this audio installation feature low frequencies and no spoken language, but some feel innately like calming lullabies while others, such as Kim’s friend David Horvitz making the sound of the ocean with his mouth, aren’t exactly soothing.  One Week of Lullabies for Roux was created by Kim’s friends under her auditory parameters as a way for her to control what she calls her daughter’s “sound diet”.  Listening to these lullabies and understanding their purpose completely redefines the meaning of a “lullaby”. How could playing a lullaby for a child bring a parent peace if they themselves do not know what it sounds like? Suddenly, the conceptual function of a lullaby has been disrupted, and listeners are encouraged to reconsider the communication methods, like sound, that they are likely taking for granted. 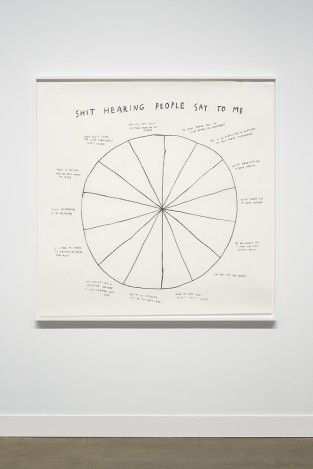 Kim’s reframing of language and sound continues on the walls, where nine large white canvases present pie charts roughly sketched in charcoal.  Here, Kim’s humorous and sarcastic voice is heard loud and clear in the language she uses to share her “personal data.”[1]  Inspired by W.E.B DuBois’s “Data Portraits”, Kim makes use of a common form of visual communication, a chart, to depict the “whys” and “whens” of her life, such as “Why I Play the Deaf Card” or “When I Pretend to Be Hearing”.  Her comical but honest data point of “feeling lazy today” as why she doesn’t read lips offers viewers insight into her experiences through a visual concept that is familiar to them.  This intersection of Kim’s sarcasm with simple charts effectively shows that “data” isn’t always in the form of statistics, and can rather be represented through experiences.  The viewer’s understanding of charts is therefore reframed, and these symbols of communication are used to tell the story of Kim’s life. 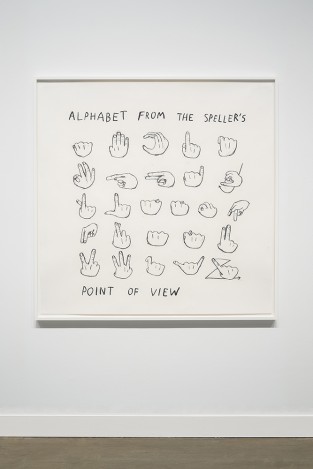 In three additional works made with charcoal on white canvas, Kim insist that viewers understand the importance of ASL as a system of communication.  However, in another effort to reframe our understanding of language, Kim depicts simple sketches of the ASL alphabet from the speller’s perspective, which she explains, allows you to “understand where the voice is coming from”.[2]  This fresh point of view continues as the same alphabet of charcoal hand drawings is shown from the “lurker’s perspective” and a “bird’s perspective”.  The seemingly simple change of the viewpoint from which this alphabet is drawn produces a complex effect, reframing a familiar language for both hearing audiences and those fluent in ASL.  As a viewer, you do not expect to encounter ASL from these angles, as you do not typically observe someone signing from above or from the signer’s point of view.  By disrupting our expectations, Kim makes us reconsider the value of ASL in lives other than our own.

While each component of Kim’s show offers a unique reconsideration of sound and language, together they effectively build on one another to reframe our understanding of familiar communication systems.  What we expect from lullabies, charts, and alphabets is disrupted, and instead we are given the chance to reconsider these concepts from Kim’s point of view.  Her perspective emerges from each piece, redefining language and sound for every member of her audience while providing a critical voice for the Deaf community. Kim’s work, from the Super Bowl field to the MIT List Visual Arts Center, is truly redefining what it means to communicate in a contemporary world.