Haiti’s national coat of arms bears the motto “L’union fait la force”, meaning “Unity makes strength”. The unified strength of Haitians presents itself time and time again, from the slave revolts that led to the nation’s independence in 1804 to the recovery efforts following major natural disasters. On January 12, 2010, Haiti was devastated by a magnitude-7.0 earthquake, with aftershock magnitudes as high as 5.9, according to the Richter scale. The most extreme damage was seen in and surrounding the nation’s capital city, Port-au-Prince. Cities south and east of the capital, such as Jacmel and Miragoâne, experienced strong shocks from the quake despite being further from the epicenter; the tremor was felt outside of the island in Cuba and Venezuela as well. The death toll reports vary, but it is estimated that approximately 250,000 were killed by the disaster and about 300,000 were injured. The effects of the earthquake include the worsening of Haiti’s economic conditions, extreme damage to major roads and homes, and the destruction of landmark buildings, including the National Palace, the Port-au-Prince Cathedral, and the National Assembly, to name a few. 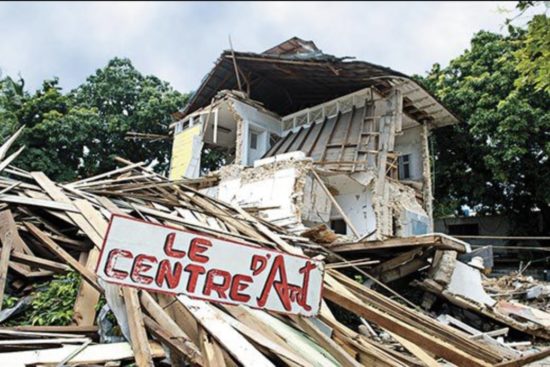 In addition to these landmark buildings, damage was also inflicted on many culturally significant sites, specifically art galleries, art museums, and churches. According to the Smithsonian Magazine[1], at least three artists, two gallery owners, and an arts foundation director died during the earthquake. Biblical murals dating back to the early 1950s in the Holy Trinity Cathedral were lost, and the paintings and sculptures located within the National Palace were either destroyed or severely damaged. At the time of the earthquake, the then sixty-six-year-old gallery and school, the Centre d’Art, was ruined. Many Haitian artists and gallery owners lost their homes, works, and struggled to find financial support. Georges Nader Jr., son of Musee d’Art founder Georges S. Nader, shared that the losses his father’s museum faced totaled an estimated 30 million USD[2]. The Musee d’Art showcased some of Haiti’s greatest artists, including self-taught artist Hector Hyppolite (1894-1948) and first-generation artist Rigaud Benoit (1911-1986), but insurance for the collection was never purchased. Art from other institutions, such as the Museum of Haitian Art of St. Pierre College, are at risk of long-term damage as well. Following the earthquake, many of the museum’s paintings now live in a storage area exposed to heat, humidity, and other climate-related threats. 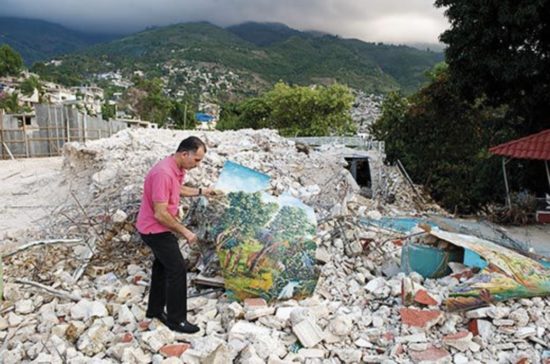 Georges Nader Jr. at the remains of Musee d’Art in 2010. Photo by Alison Wright.

Despite the overall hardships, artists, gallery owners, and outside institutions are still continuously striving to revive Haiti’s art scene. Nader Jr. and his staff have been working to salvage the work his father collected for over forty years. The Musee d’Art Nader – now known as the Galerie Nader – website shares that Nader Jr. was a key figure in the recovery and restoration of Haiti’s national heritage, which was buried under the museum’s rubble[3].

Within two weeks of the earthquake, Nader Jr. and his staff managed to find about 1,000 pieces, with seventy percent of them needing restoration. After eight months, approximately 3,000 of the estimated 15,000 paintings Nader Sr. housed were found; 1,800 of the 3,000 paintings were damaged. Among the recovered and damaged pieces was a still life work from Hyppolite, but the twenty by twenty-inch painting was in eight pieces when found. A decade after the earthquake, more than 14,000 paintings have been recovered, and conservator Hughes Berthin, trained via the Smithsonian Institution, treated around 2,000 of these paintings. Other efforts include the Smithsonian’s drive to collect and send paints, canvases, and brushes to the Nader Gallery for Haitian artists. Like the Nader Gallery, the Centre d’Art received assistance to make rebuilding efforts a reality. In 2019, the Center received an investment to construct a new building; it was also reported that it will begin having Caribbean artists-in-residence, though whether this plan went through is unknown considering the current political conflict in Haiti. 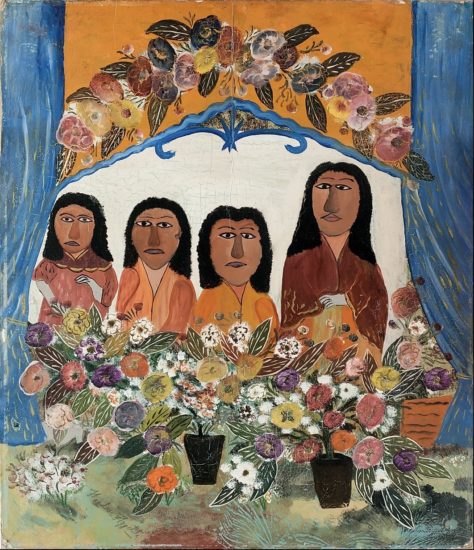 Of the artists listed, Duffaut experienced the earthquake and its effects before his death in October 2012. Beginning his career using shoe polish as paint and guinea hen feathers, Duffaut gained recognition for his artist talents and participated in creating the murals in the Holy Trinity Cathedral. With the destruction of the Holy Trinity Cathedral in 2010 came the destruction of The Temptation of Christ and The Processional Road, two Duffaut pieces. The collapse of the Centre d’Art during the earthquake also meant the place Duffaut sold his first piece of art was demolished. Duffaut shared that his future paintings would be inspired by the earthquake, stating “What I have seen on the streets has given me a lot of ideas and added a lot to my imagination”[4]. Like Duffaut, other Haitian contemporary artists have found inspiration from their experience during the quake and the healing process afterward. Visual artist Ama Makeda, for instance, began painting flowers after a garden meditation experience in Haiti following the earthquake. Makeda described the experience as a method to accept healing from the disaster’s damage and strongly connected with the flowers around her during the meditation[5].

Despite its turbulent history, Haiti’s art continuously brings people together. While often under-appreciated outside Haiti, the most important aspect of its art scene is that it is loved by poor, rich, old, and young Haitians. Haitian art is a foundation of the nation’s culture, and the many efforts to preserve it following the earthquake reinforce and embody the true meaning of “L’union fait la force”.