From plush vampire fangs to oversized, glossy fiberglass blood droplets, American artist Sterling Ruby’s artworks always puts materials at the forefront. This material-centric approach is reflected in Ruby’s first comprehensive US museum exhibition recently on view at the ICA Boston.[1] More than just presenting the materials themselves, the installation of over 70 sculptures, drawings, photographs, and textiles highlights the way that Ruby is invested in elevating the craft behind creating these works, breathing a new life to traditional techniques that have been used for generations, like ceramics and quilting, but are not typically associated with contemporary art. Those craft techniques that build and sustain communities like the Amish communities that Ruby grew up around in rural Pennsylvania are no longer widely used by manufacturers in today’s hyper-industrialized and automated world. By making reference to craft techniques such as metal working and quilt making, along with elevating cheap materials such as Formica, polyester, and spray paint, Sterling Ruby challenges the assumed material hierarchies within visual art. The ICA Boston exhibition gives viewers the opportunity to experience these material comparisons up close offering a view into the artists foundational methods. 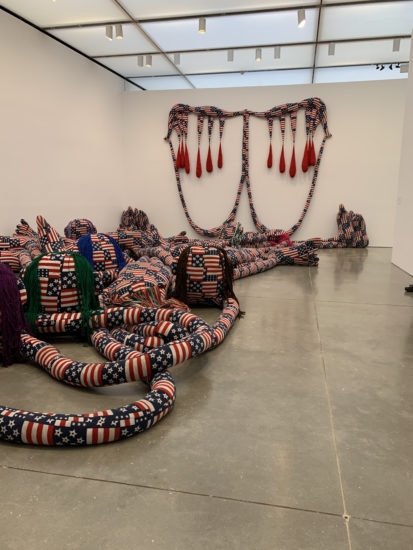 In the exhibition catalogue for the show, Eva Respini, Barbara Lee Chief Curator of the Institute of Contemporary Art in Boston, describes how during Ruby’s upbringing in rural Pennsylvania and around US Army bases, young men like Ruby were taught ‘masculine’ skills such as metal working, which he employed in his series of towering metal stoves, STOVES [2012 – ongoing], and his series of gun shaped sculptures, MS [2010-2011]. While men were supposed to learn woodworking, Ruby “rebelled against the school’s strict binary gender norms by making clothes, and fabric and collage works, on his sewing machine”.[2]  In his politically charged Vampire series, for example, Ruby sews together plush vampire fangs adorned with the American stars and stripes and deep red blood droplets. At first glance, the piece appears oxymoronic: fangs capable of piercing flesh and drinking blood should not be as soft and cushy as Ruby makes them out to be. But taking an even deeper look reveals the complex labor practices that went into stitching the whole thing together, from sourcing polyester fabric used to mass-produced cheap fleece blankets and the handwork that it took to create a unique sculpture out of the same fabric. According to the artist, the piece is critical of the United States: it may come off as welcoming and safe but is, in reality, a blood-sucking monster. The same red white and blue fabric is used to form larger than life rag dolls with ropey arms in FIGURES. PILE [2019]; soft intertwined adult-sized bodies made of the same polyester fabric with a printed pattern of American flags that approximate the look of a hand-made quilt are strewn all across the museum floor with their limbs all tangled.

Ruby’s sculptures juxtapose these symbols of safety and home with those of violence and greed in the form of bloodthirsty fangs and dead bodies, asking viewers to think about which are the more quintessential American traditions. Respini refers to this juxtaposition as an “illicit merger,” explaining that Ruby uses these illicit mergers to “viscerally capture the restless, divided, and uneasy times in which we live.”[3] By combining two very disparate ideas, Ruby creates cognitive dissonance for the viewer about the United States. As Americans, many of us are given a safe, comfortable life, but at what cost? 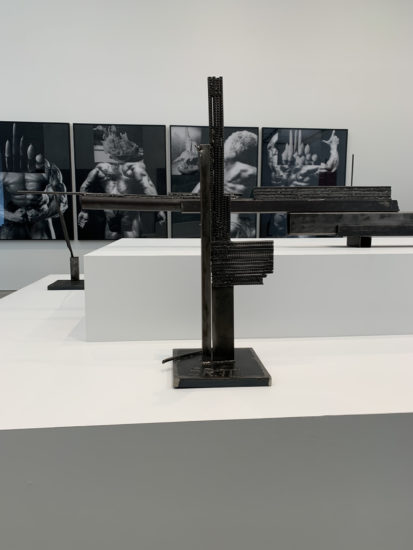 These works, which are central to the ICA Boston exhibition, reflect how Sterling Ruby’s work is not just an appropriation of materials but it is also a re-appropriation of the techniques he uses to craft those materials from inside his sprawling, four-acre studio in Vernon, California, a blue-collar industrial town south of Los Angeles. Ruby has a team of assistants that work to materialize his artistic vision; together, they use traditional hand-based techniques not typically associated with contemporary art, like ceramic making or quilting, setting up a series of equivalences between craft and fine art.[1] In his STOVES series [2012 – ongoing], for example, Ruby recreates metal stoves in the same fashion as people have been doing in Amish communities; the difference is that his stoves live in highbrow collections and museums whereas the stoves of the Amish are functional appliances. In spite of the fact that people still craft metal stoves by hand in this industrialized world, Ruby takes those fabrication techniques and elevates them out of their blue-collar origins.

Sterling Ruby and his team of artists preserve the traditional techniques that he admired and was drawn to in his youth by transforming them into his sculptures and installations along with industrial materials such as steel and cement. By juxtaposing tradition with contemporary issues, what Respini highlights as an “illicit merger,” Ruby and his team create new meanings for those crafts and gives them a new place in today’s discourse. The histories of communities, similar to the Amish communities Ruby grew up around, are no longer relegated to only historical or craft museums but are given equal footing.

[1] Sterling Ruby’s exhibition, curated by Eva Respini and Alex Gartenfeld, is on view at the ICA Boston from February 26 – May 26, 2020 and was on view at ICA Miami from November 7, 2019 – February 2, 2020. See https://www.icaboston.org/exhibitions/sterling-ruby for more information.