This week’s contributing author, Devin Raynor, is a second-year undergraduate student at Northeastern University, pursuing a BFA in Design.

American sculptor Beverly Pepper’s active career spanned over six decades and continued until her death on Feb. 5, 2020. Over the last few years her work has had an international resurgence. In Italy alone, Amphisculpture in L’Aquila opened in fall of 2018[1] and Beverly Pepper Sculpture Park opened in Todi this past September.[2] Her works were also included in the 2019 Venice Biennale.[3] Additionally, her work was exhibited at the Kayne Griffin Corcoran[4] and twice at Marlborough’s New York gallery in 2019.[5],[6] Beyond exhibitions, T: The New York Times Style Magazine interviewed Pepper for an extensive profile in September 2019.[7]  With this return to the foreground, it seems only fitting to also draw attention to her existing public works—an important component to Pepper’s enduring relevance to contemporary art.

Christopher Ketcham, Associate Curator of Public Art and Permanent Collection at the MIT List Visual Arts Center, is a key figure among those who continue to highlight Pepper’s work. Since being appointed to the position in the fall of 2019, Ketcham and the MIT List Visual Art Center have prioritized finding a new, more visible location on MIT’s campus to re-site Pepper’s sculpture Trinity (1971), saying: “I think it is a significant sculpture on its own merits, one of Beverly Pepper’s best works in Corten steel, and an important part of MIT’s public art collection.”[8]

Students are visible walking through the hallway behind Beverly Pepper’s Trinity, 1971, which sits on the lawn between MIT Buildings 16 and 26.

Made from three pyramidal forms resting on top of each other, Pepper’s sculpture highlights the artist’s ability to make industrial materials feel natural, seeming to rise from the ground like mountains (or sand dunes, as referenced in the work’s original title, Dunes I). Despite the flat nature of Trinity’s overlapping planar geometry, the work exists dynamically in three-dimensional space. Viewing the sculpture from different angles drastically alters its appearance, as relatively simple shapes join to create a complex form.

Trinity is one of Pepper’s many Corten works that illustrate her mastery of the material. She was one of Corten’s pioneers, and claimed in a 2009 interview for the Smithsonian Archives of American Art’s oral history project to have used the metal before any other artist.[9] And yet, somehow, the list of artists known for creating pieces with Corten steel is topped by names like Richard Serra, Donald Judd, Barnett Newman, and Robert Indiana.

Corten is known for its weathered appearance and rust-like color, caused by chemical coatings known as ‘patinas’ which form on its surface as a result of exposure to the elements. Pepper told the Smithsonian that her knowledge of the material led Newman to ask for her help creating the patinas on his famed Corten sculpture Broken Obelisk (1963-1969). “And why did I know how to do the patinas? Because I was working in U.S. Steel with the people who invented it,” Pepper said. “It’s not been ever published, [but] I did the first Cor-Ten pieces.”[10]

Despite her struggles as a woman in a male-dominated field, Pepper resisted labels like “woman artist,” and she never felt limited by being a woman. She was one of few female sculptors of her era who spent time alongside men in factories, bending and welding the metal she worked with. Still, Pepper faced obstacles because of her gender. While at Pratt Institute, she was barred from studying industrial design because a woman using the machinery was deemed inappropriate. A brutal 1987 New York Times review by critic John Russell,[11] in which he said her work lacked “even a vestige of original talent,” also forced Pepper into “a very distorted relationship to the museums world in New York for a long time.”[12] It is unfortunate that a single male critic’s opinion had the power to influence the course of her career, and perhaps explains some of why her name remains largely unknown.

Considering how Pepper’s name has historically been sidelined relative to her male contemporaries, Ketcham’s plan to move Trinity to a more prominent location is timely. It coincides with ongoing discussions around gender inequity and issues of representation at MIT, sparked in September 2019 when leading female faculty members wrote a letter to the university’s President and Provost expressing outrage after discovering MIT accepted and later disguised donations from registered sex offender Jeffery Epstein.[13] At a moment where both the university and the broader world have begun to recognize their failures to represent women’s contributions in fields from art to academia, it seems especially unjust that Pepper’s sculpture is relegated to a forgotten corner of MIT’s campus while pieces created by male artists make up most of the institution’s prominently displayed public artworks.

Currently, Trinity sits on a small, mostly inaccessible lawn tucked between two buildings. The nearby indoor hallway from which it is most practical to view the sculpture is designed to be walked through, making the work itself easy to pass by. It would be misleading not to point out that Trinity was placed in this isolated location to protect its surface from further damage after someone rode a bicycle on it. Still, even if some of the people who go through the hallway every day do stop to look out at the sculpture, they are only able to see it from a single perspective. 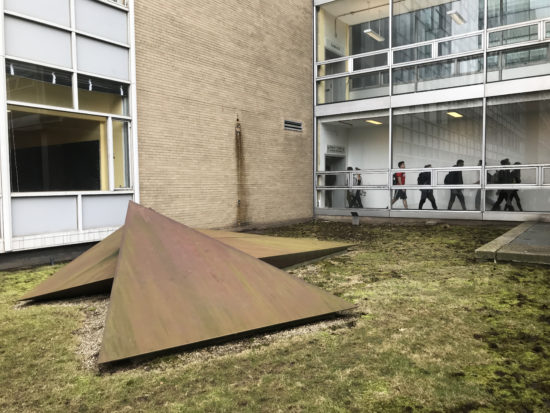 Staining from a pipe is visible on the wall behind Trinity. The sculpture has similar stains as a result of excess water and biological growth.

Moreover, despite being relocated to prevent damage, Trinity’s current site actively contributes to its degradation. A damp, waterlogged environment created by poor drainage contributes to biological growth on the sculpture’s surface, resulting in staining that must be treated regularly by a conservator. However, Ketcham said this requires a significant cost, making treatment hard to justify, considering growth will continue if the sculpture is not moved. Through MIT’s visionary Percent-for-Art program administered by the List Visual Arts Center, Ketcham is working with an on-campus dorm he believes would be an ideal site for Trinity and said the new space would likely reduce the need for regular maintenance. Though he feels the piece “would [fit] perfectly, complimenting the architecture and open space, as well as the social and political identity of the dorm,” he has prioritized engaging with the community directly to ensure the piece would not obstruct existing uses.[14] After developing a proposal for the re-siting that was presented to the dorm’s residents, Ketcham said approximately 60 percent of those who responded supported the plan, though negotiations still need to be finalized.

Though it is disappointing that the timing of Pepper’s moment of rediscovery came at the end of her life, Ketcham’s efforts to give recognition to her work still feel like a victory. Re-siting Trinity in a more prominent location where it will be better maintained and appreciated would serve to give crucial representation to a woman who made significant contributions to her field.