For most people, a PowerPoint presentation’s influence hardly extends past a staff meeting or lecture hall. For Tony Cokes, his slide decks’ influence is boundless.

Based out of Providence, Rhode Island, Tony Cokes has been producing provocative art since the 1980s.1 Cokes made a name for himself in the contemporary art world with multimedia art that articulates his commentary on politics, race, and society by appropriating literature and music samples and dressing them with color-blocked backgrounds and stark white text. Tony Cokes: If UR Reading This It’s 2 Late is a career-spanning sampling of Cokes’ work comprised of ten pieces produced between 1990 and 2020. Two of these films were commissioned for the exhibition, one by the Carpenter Center for Visual Arts (CCVA) and the other co-commissioned by the CCVA2, the Goldsmiths Centre for Contemporary Art3, and the ARGOS centre for audiovisual arts.4 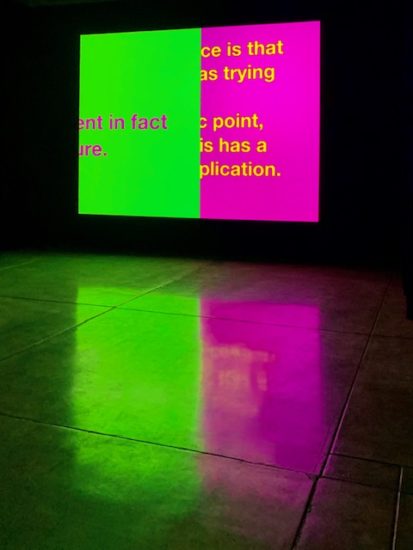 If UR Reading This It’s 2 Late: Vol. 2 spans two of the CCVA galleries. The ten pieces are dotted between the spaces and vary in presentational style. Films are either projected or displayed on monitors of various sizes, including large LED screens, while audio is threaded through on-ear and over-the-ear headphones and bass-heavy speakers. As I walked through the exhibition, this variance struck me. Moving from film to film, I noted how projection versus screen and headphones versus speakers influenced my viewing experience.

Dan Byers, John R. and Barbara Robinson Family Director at the CCVA, relayed that Cokes is interested in the way that others “remix” his work.5 The presentation and layout at the CCVA results in real-time remixing of films as doors are opened and headphones removed. The displays of two pieces in particular exemplify the exhibition’s range in presentation and its impact on the viewing experience. 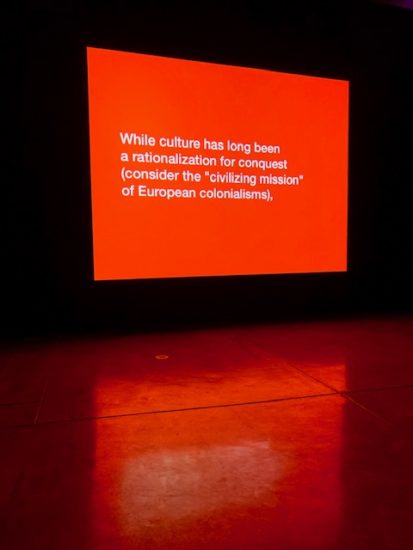 Evil.16(Torture.Musik), 2009-2011, is one of Tony Cokes’ best known films. This politically driven piece was part of his Evil Series that focused on the world events and conversations that dominated society after 9/11. It uses text from Moustafa Bayoumi’s 2005 article entitled “Disco Inferno” produced for The Nation that described the U.S. military’s use of Western music as a torture device. Cokes sampled this journalism and overlaid audio like the Barney & Friends theme song and Bodies, by the alt-metal rock band Drowning Pool. These songs were used during the forced interrogations.6

This piece is projected onto a seven by nine foot screen in an unlit space, separated from the bookstore lobby by a soundproof door. The only light in the room is the projection, forcing the viewer to maintain focus on the piece. Cokes also employs this strategy by carefully timing his slides to create a collective reading experience.5 This feeling is unfamiliar. We are used to having control over our rate of viewing. Cokes intentionally takes this away from us, almost mimicking the control taken away during these torture tactics.

The audio for Evil.16 is played through high-quality noise-cancelling headphones. Like the lighting, the audio is immersive. The listener is subjected to the spliced audio samples until they take the headphones off. Even then, the Barney/Bodies sample emulsifies with the music from the neighboring piece, Untitled (m.j.: the symptom), allowing the viewer to participate in the remix.

The Morrissey Problem, 2019, is one of the works commissioned for the exhibition. The piece charts insensitive statements made by former frontman of The Smiths, Morrissey.6 This new film is positioned in the Sert Gallery, a modest lobby that also houses an information kiosk and small bookstore. The piece itself is displayed on a 65-inch monitor suspended from two poles that extend floor to ceiling. This is a distinct difference from Evil.16. The viewer’s eyes can wander from the screen to the exhibition text on the wall to the bookstore offerings. This viewing style allows us the freedom that we are accustomed to. With so many visual stimuli around and less screen area to captivate our roaming eyes, the piece acts as a test of the viewer’s attention.

The audio, comprised of The Smiths records, is played aloud. It is subject to the external and internal doors opening and conversations floating in the lobby. Again, the listener has multiple auditory channels thrown at them. If the viewer manages to focus on the piece visually, their ears may tune out the noise entirely. This film presents a constant battle for attention and results in a different experience for each viewer depending on what they hone in on.

The intentional interplay of the ten displays now on view at the CCVA unveils the impact small decisions can make on the viewer’s experience of a piece. If UR Reading This It’s 2 Late will move to the ARGOS centre for audiovisual arts after the exhibition closes at the Carpenter Center for Visual Arts on April 20, 2020.

Tony Cokes doubles as Professor and Interim Chair of Modern Culture and Media at Brown University.

The Carpenter Center for Visual Arts is Harvard University’s public hub for contemporary art. The CCVA focuses on curating exhibitions, commissioning works, organizing public events, and producing publications. This traditional institutional context is imperative to acknowledge when discussing a radical artist like Tony Cokes and the societal constructs he challenges through his art—the moral compass of the military, the continued praise of problematic celebrities, racial tensions in America, etcetera. His works “recontextualize appropriated materials to reflect upon our production as subjects under capital.”