This week’s returning author, Charlotte Meyer, is an artist and writer focused on the preservation of artists ideas, currently focused an Oral History project on Nuevo Museo de Arte Contemporáneo, NuMu. She is Lead Artist Guide and Educator at Judd Foundation, has been a Visiting Scholar at Dedalus Foundation, and a Visiting Critic at R.I.S.D.

not yet
please
– Regina José Galindo, Me

Exhibition spaces play a pivotal role in defining how we experience art. Nuevo Museo de Arte Contemporáneo, NuMu, is Guatemala’s first and only contemporary art museum, the world’s smallest exhibition space, and is located within an egg-shaped structure.

When artists and co-founders Stefan Benchoam and Jessica Kairé first conceived the idea of a museum, it was to support and advocate for the richness of the art community in Guatemala, create a positive environment around artists’ work, and essentially build an art history in an under-resourced community. Acquiring a physical space came with obvious challenges, but being artists themselves gave them the “liberty to play around”[i] and not take themselves too seriously. They did an inventory of what their shared resources were in terms of people, contacts, and organizations and brainstormed models of project spaces closely aligned with their vision. A digital platform seemed like the logical first step, but when Benchoam saw a ‘For Rent’ sign on a familiar landmark building originally designed to be an egg kiosk and shared the news with Kairé, it was an “ah-ha” moment.

The building is small and complex, holding three or four guests at a time, but being recognizable and distinctive draws people in. The utilitarian aspects of the physical space “shaped up a particular approach to exhibiting and had its own intelligence,”[ii] facilitating NuMu’s functionality day and night. With thirty beautiful windows circling the upper third of the form at eye level, and the official looking logo, ‘NuMu’ imposed a visual hierarchy. Even the egg motif – ‘huevos’ translates roughly to ‘balls’ – was key to the creators’ thinking; choosing the egg kiosk as their exhibition space was a gutsy move, for them similar to Pablo León de la Barra’s “White Cubicle Toilet Gallery,” founded in 2005 in the back of George and Dragon pub located a few blocks from White Cube. It was institutional critique directed at itself. 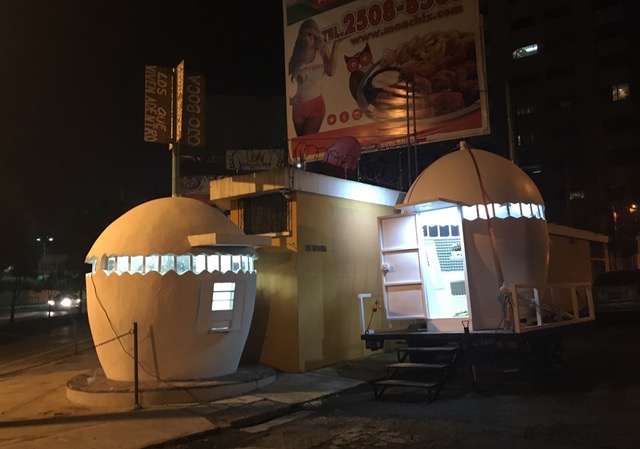 Benchoam and Kairé have subverted expectations in their curatorial choices, showcasing internationally acclaimed contemporary artists such as Federico Herrero and Pia Camil among others. They collaborate with each artist and curator in the installation of works inside NuMu, while the outside of the space often metamorphosizes for exhibits.  Their objective has been to take it one show at a time, to slowly shift the conversation and build a platform for dialogue with a public of varying voices and ideals. It is important to note that even though Guatemala lacks institutional and private backing for the arts, NuMu rapidly gained momentum internationally with the support of a strong group of peers.

During NuMu’s second year, curators Rita Gonzalez, Jose Luis Blondet, and Pilar Tompkins Rivas from the Los Angeles County of Art Museum (LACMA) visited the site. They were traveling through Latin America to select artists for “A Universal History of Infamy,” an exhibition inspired by the writing of Luis Borges, included in Pacific Standard Time: LA/LA, an initiative focused on Latin American and Latino art led by the Getty Foundation. Alongside fifteen other artists and collaborative teams, Benchoam and Kairé were invited to L.A. to participate in a residency, which provided space and time to engage with LACMA’s collection and the city, and visit artists and artist-run spaces. During this period the curatorial team functioned as a support system for the artists. Furthermore, they were an integral part of the creative process to develop ideas expressly for the exhibition, no checklist of selected objects existed ahead of this preparatory time, which allowed for a conversation to develop on how best to represent NuMu in a different location. Their exhibitions often explore the notion of a building as both place and process. How would they transport concepts and embody the essence and passion of the project?  Would photographic documentation be sufficient to show the scope and originality of their program?

After considering many options, Benchoam and Kairé chose to represent the original structure of NuMu with the only viable solution, to remake the egg. Thus the first and only contemporary art museum in Guatemala received funding from LACMA via a Kickstarter campaign to create a replica and facilitate its journey. A new slim L.A. version was hatched, the NuMu pod, with twenty-eight windows instead of thirty, and built with a fast approaching deadline. Transporting the museum across borders proved challenging, so the team required assistance with paperwork issues from good friend Eduardo Mata, NuMu’s Chief Technical Officer, and the support of many others. When the pod reached its destination on the LACMA campus, within close proximity to Michael Heizer’s rock “Levitated Mass,” NuMu’s co-founders were elated; their unique exhibition space, which began as a grassroots organization, was installed inside a major institution. 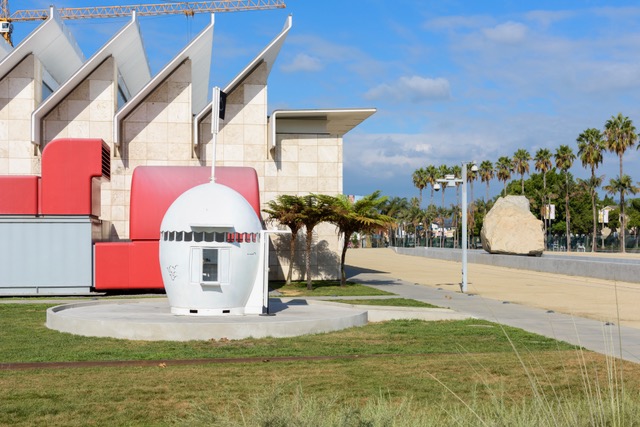 Internationally renowned artists Joaquín Orellana and Regina José Galindo were selected for NuMu’s exhibition program at LACMA, to represent Guatemala and a diversity of generation and gender. Orellana, an experimental composer whose work gives voice to the atrocities committed during the Guatemalan Civil War, creates sounds of hunger in his musical scores. NuMu’s traveling replica housed a second iteration of the exhibition “Soundscape,” with his music and ‘sound utensils,’ during their trip and initial exhibit at LACMA. Galindo, one of the most provocative artists from Latin America, explores the politics of Central America in her performances, exposing crimes against women, and advocating for the most vulnerable. Guatemala, 2013, was created specifically for NuMu, as part of “Retrospectiva,” Galindo’s first ever retrospective in her hometown. During the site-specific performance thirty-four locals of varying socio-economic status, gender, and age were paid to fill the very small building for two hours. The marks, scratches and traces of their positioning within the space remained after they exited, displayed alongside thirty slides of her seminal performance-based works pasted to each of the windows. The content for L.A.’s iteration of Galindo’s “Retrospective: A Solo Exhibition by Regina Jose Galindo,” 2018, shifted to the subject of migration. A collection of poems entitled Spiderwebs written between 1999 and 2014, and twenty-eight previous performances were shown in each window, representing the individual, connecting to the universal. 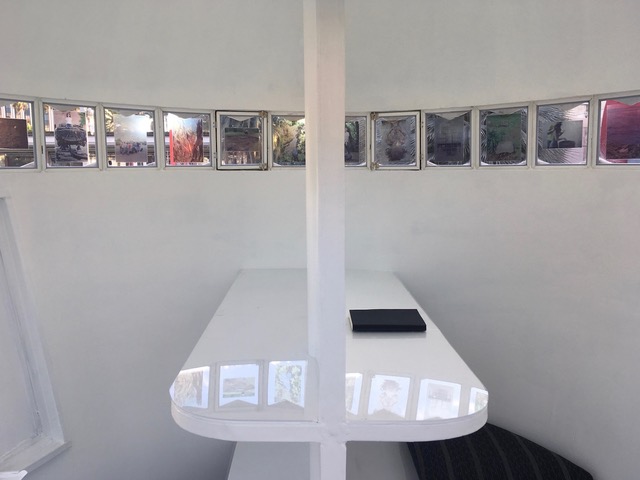 Inside NuMu during Retrospective: A Solo Exhibition by Regina Jose Galindo

Mobilizing NuMu allowed for a wide range of audiences and communities to connect with their programs, and have access to growing perspectives on contemporary art, diversity, and changing ideas. In claiming a space that was part of their communities past, NuMu has forged an intense relationship with their neighborhood in Guatemala, preserving the country’s DNA and safeguarding it for future generations.