This week’s contributing author, Michele Rushfeldt, is a visual artist living and working in Brooklyn, NY. Her three-dimensional work focuses on materials associated with sexuality and kink, and depicts how observations of fringe eroticism feel and look. Originally from Minneapolis, MN, she obtained her BFA in painting from the Academy of Art University in San Francisco, and then her MFA from Pratt Institute. Her work has been exhibited nationally, including galleries in California, Washington, D.C., and New York.

This past December, Pratt Institute hosted Voices in Contemporary Art (VoCA) and the Joan Mitchell Foundation (JMF) for a panel discussion that focused specifically on Legacy Specialists, artists who help organize and inventory the work of older artists as part of JMF’s Creating a Living Legacy (CALL) Program. The audience heard from three artists – Antonia Perez, Rose Nestler, and Julia Rooney – who, in addition to contributing their valuable time and experience to JMF’s CALL program, have managed to thrive in their own artistic practices as well. For this, the first panel discussion of the ongoing CALL/VoCA Talks series to focus on Legacy Specialists, main topics of discussion included materiality, archival ability, and controlling how one’s art is consumed. After brief presentations by the artists, moderator Kendra Roth, a sculpture conservator at the Metropolitan Museum of Art, lead a conversation about issues pertaining their work. 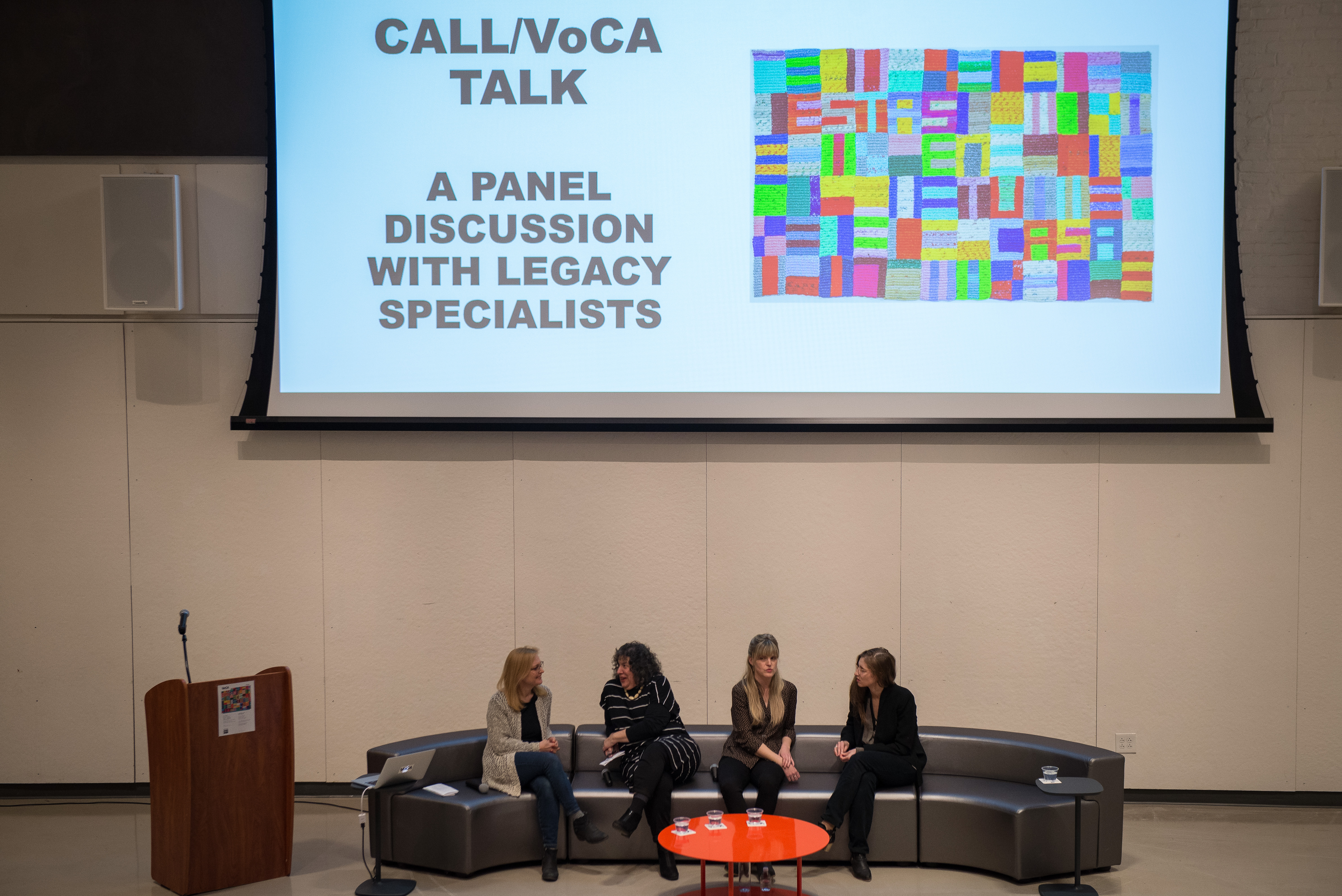 Antonia Perez’s description of her large-scale, crocheted plastic sculptures and installations prompted Roth to present questions that focused on the materials themselves. The artist described the labor-intensive process of making the work – the time, physical and emotional energy, and discipline it takes to complete each piece – and her growing commitment to saving the planet from our consumption of single-use plastics. Perez also described her commitment to not only the cultural history of her Mexican heritage, but also to future generations with artworks that are meant to be viewed as heirlooms. One of these works, entitled Estas En Tu Casa, is a large-scale, crocheted plastic mat for immigrants that read “You are In Your Home” in Spanish. Her public projects reach out into communities in order to invoke change, such as an interactive piece where the artist gave out plastic crocheted flowers to anyone who signed a written commitment to avoid using single-use plastics. 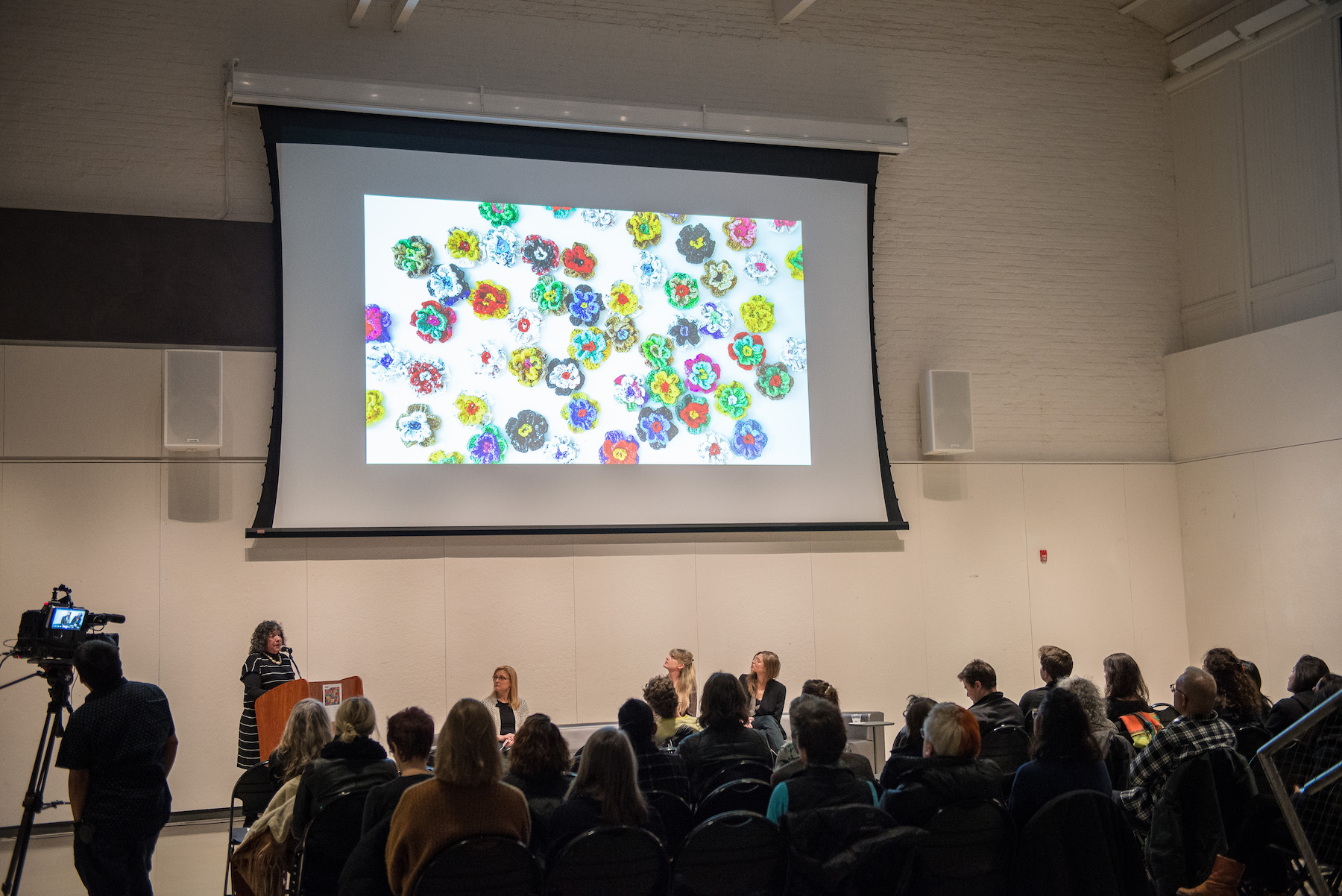 A three-time legacy specialist with a recently acquired MFA from Brooklyn College, Rose Nestler was the second artist to speak about her work. She speaks of her sculptures like friends, giving them personalities and roles, and even going so far as to give them lives through performance and film. Nestler’s interest in the body, gender, and power dynamics makes itself evident in her work from the last several years, beginning with her performance sculptures about wrestlers. The work speaks to the complicated nature of masculinity, with the sculptural body part props being torn off of the main torso one by one, like kinky, fetishized objects. Incorporating humor into her feminist message, she began making work using control-top pantyhose in an effort to take traditionally feminine, restrictive items and turn them into something absurd and out of control – in this case, in direct rejection of the male gaze. During the description of some of her more recent work, the artist’s interest turned to spaces that are historically gendered, such as corporate office culture. She began incorporating the performativity of the women’s power suit, sometimes viewed as a shield for women, or a manifestation of shame for covering the body, into sculptures and films inspired by the #MeToo movement. Since her most recent solo show in January, 2018, Nestler has started looking at the world of sports for inspiration, and how this traditionally male subculture feeds into the system of patriarchy. 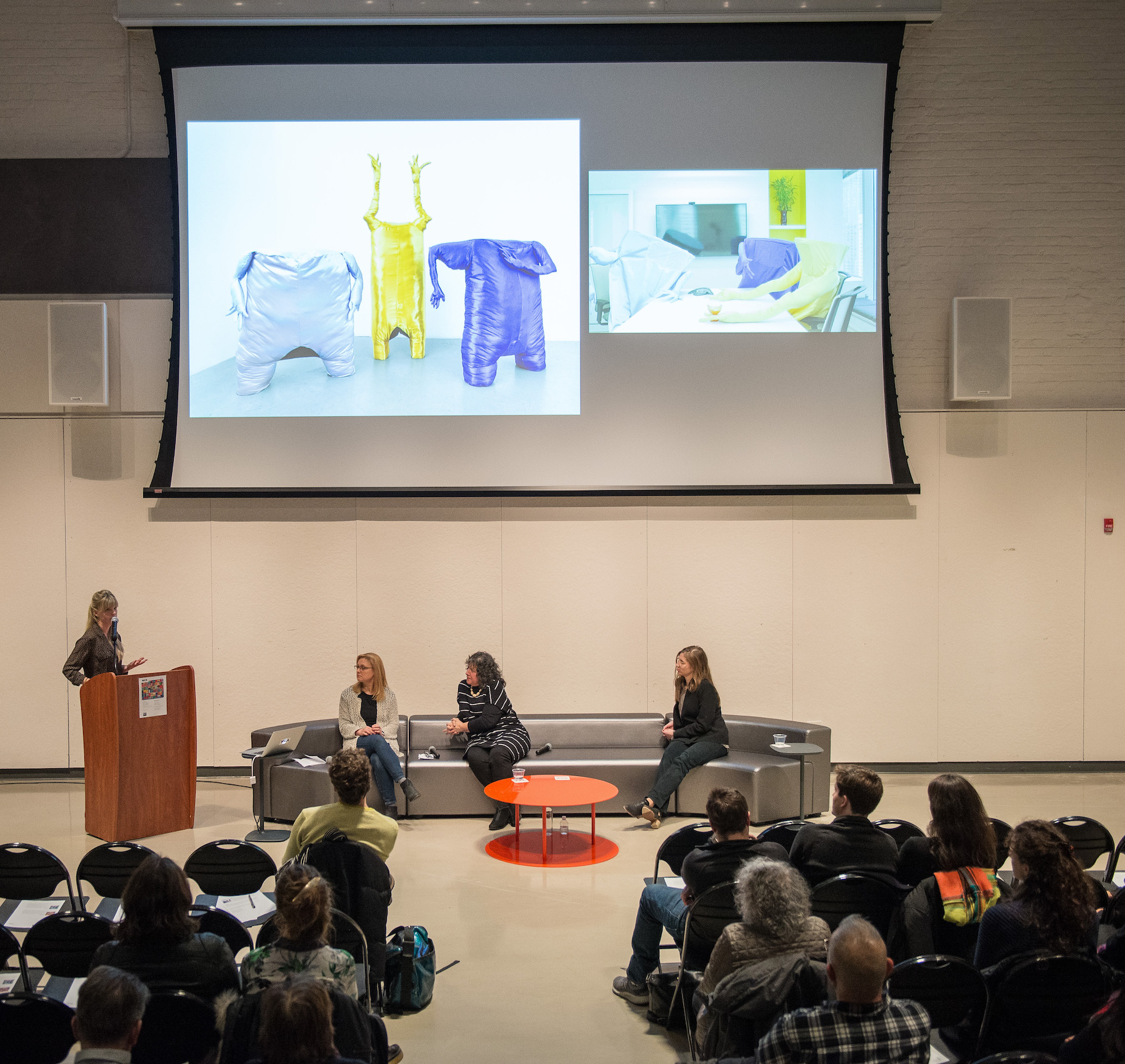 Artist Rose Nestler speaks to the audience about her practice

Julia Rooney described her work as primarily “source-driven,” coming from influences that are rooted in the world. Her work can be seen to play with and reorder information in order to turn the data into something more open-ended. One of her examples was a work where she used 35 mm slides and flipped them over onto themselves, layering the slide image and changing the visible result, effectively altering the visual information. Working with found objects such as wooden drawers, window blinds, neoprene, old paint rags, and even underwear, she changes the way a viewer looks at what is the “front” and “back” of a painting, even placing the canvas upright in the center of the room to create a “screen”.  Rooney’s freestanding screen-paintings take on a form that is space, becoming an object with six sides. Her innovative use of everyday materials makes the viewer look at the objects that surround them in a new, creative light. 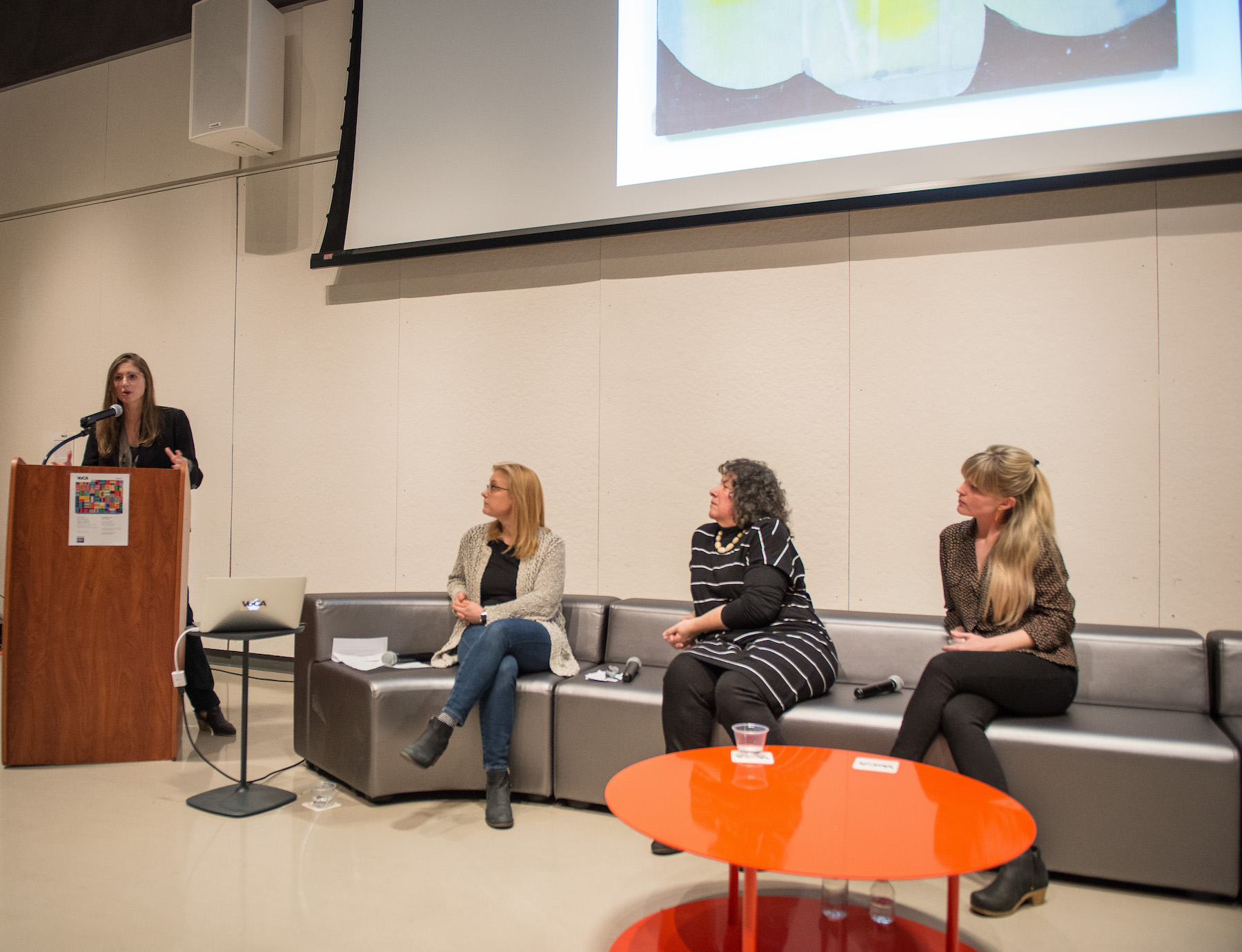 All three of the artists were asked about their materials, challenging ideas of preciousness and exploring the contradiction of using non-permanent materials during a panel discussion about legacy-building.  While the artists all agreed that their legacy doesn’t necessarily mean that their work and/or materials need to last through the ages, they did place different amounts of importance on how they will be regarded by the next generation of artists and thinkers. Where Perez is more concerned with the world we leave behind, Nestler feels strongly about having reputable work and promotional material that represents her well. Rooney regards the materials as “choosing her,” and believes that when the work breaks down, it becomes other work, creating a new history of the mark. One of the other key takeaways from the panel discussion was the fervent stress on taking downtime. Each of the artists described the need for outside activities to break the constant stream of making art, and leaving space for other priorities in life, be they kids, socializing, sleeping, or relaxation. And finally, in the spirit of the CALL initiative, the legacy specialists all prioritize their mentorship of other artists, and the interdisciplinary, intergenerational support of their community.

Overall, my impression of the panel discussion was that it was extremely rewarding and useful to learn about these diverse artist’s practices, their commitment to mentorship, their differing uses of materials, and their viewpoints on approaching the importance of legacy. I look forward to VoCA artist conversations hosted at Pratt Institute in the future.

All photos by Taylor Dafoe. Courtesy of Voices in Contemporary Art.