This week’s contributing author, Athena LaTocha, is an artist whose monumental works on paper explore the tenuous relationship between man-made and natural landscapes. Born in Anchorage, Alaska, she’s had her work shown across the country including a solo exhibition at the Institute of American Indian Arts Museum of Contemporary Native Arts this year. LaTocha lives and works in New York City and Peekskill, NY. 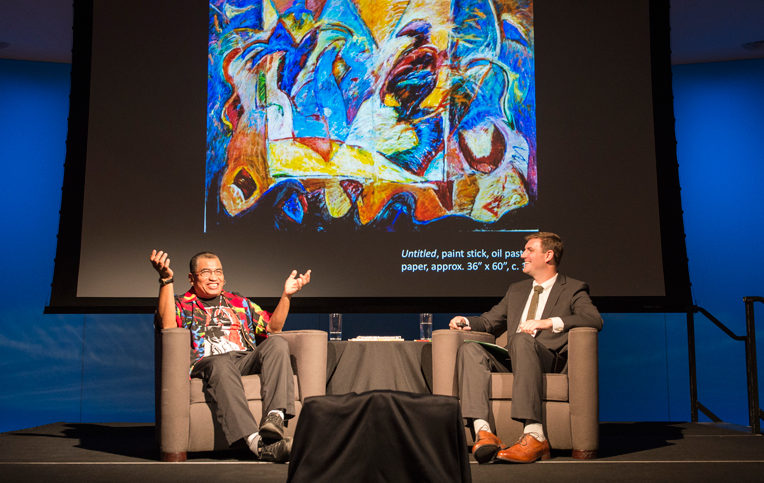 I first met Mario Martinez in 2005, at the Smithsonian National Museum of the American Indian in New York City. The museum was exhibiting a mid-career retrospective of his work and I was interested in seeing how he integrates his Yaqui culture into his abstract paintings. Returning to the National Museum of the American Indian on October 12, 2017 to attend a conversation between Mario Martinez and Steven O’Banion, Director of Conservation at Glenstone, re-grounded the context of Martinez’s work within his cultural background as a member of the Pascua Yaqui Tribe from New Penjamo, Arizona, while providing thoughtful insight into his working process and approach. 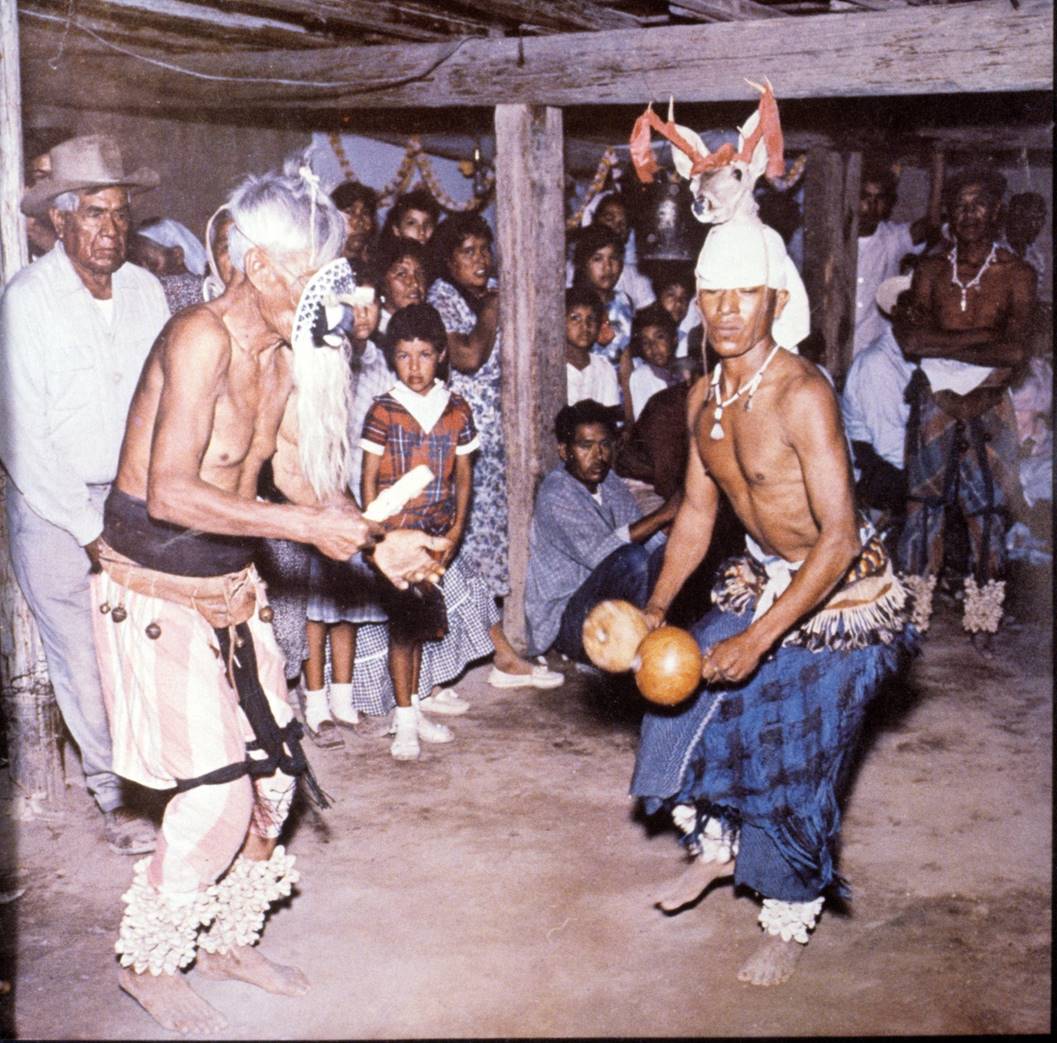 The conversation began with a short video of the Yaqui deer dance. The introduction of the deer dance, and the various materials on the dancers—such as flowers, cocoons, animal masks, and human masks—all find their way into Martinez’s use of abstract language and symbols that have influenced his work. The deer dance opened the dialog to Martinez’s use of imagery and symbols, and the active role his culture plays in his work. The emphasis of the video was not simply the dance—it was also on the musicians as participants, as community, and the sacredness of the ritual. “I never allowed myself to use ceremonies—to dictate actual Yaqui anything, you know—in my paintings and so I always figured, well, I might as well be an abstract painter,” Martinez said.

His immersion in his culture and community has played a significant role is his development as an artist and his layered approach with images and shapes in abstract environments. In addition to talking about the cultural references in his work, Martinez addressed the development of specific works and his approach to the work itself. When talking about Serpent Landscape (1993-4), he mentioned this work was his last thick oil painting—that there were three or four “pretty good paintings underneath” that he had to paint over because he didn’t have enough money at the time: “You do what you have to, to keep going.” 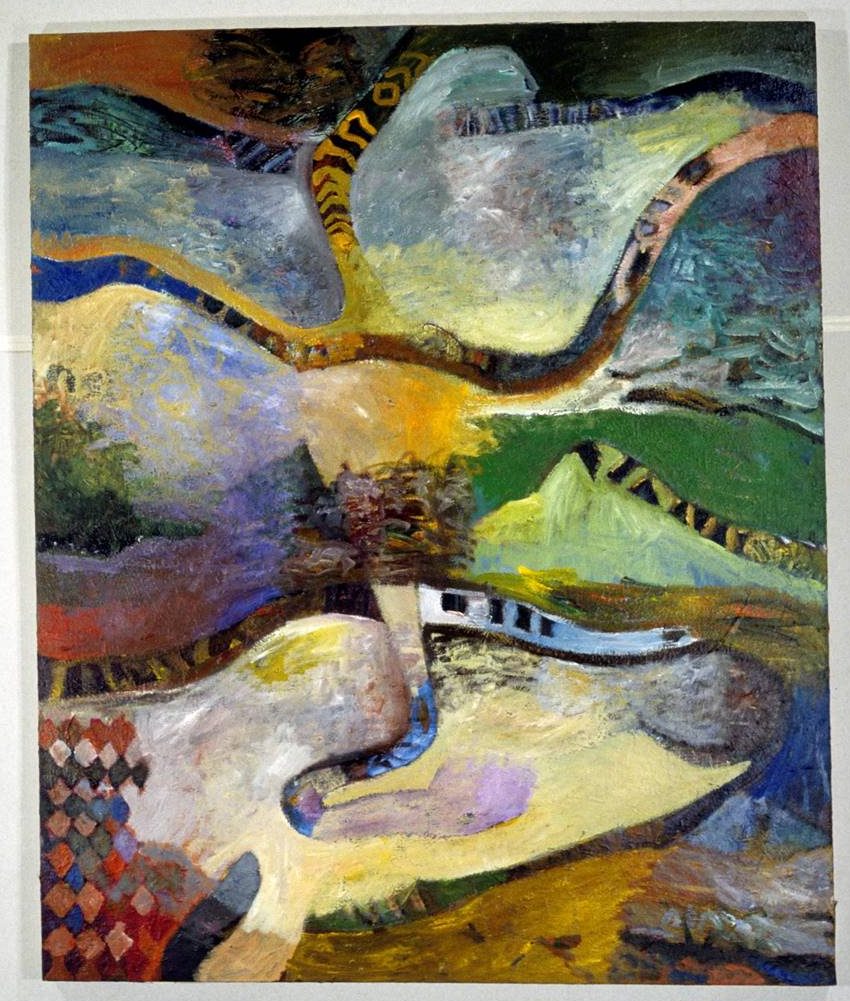 Upon finishing his BFA at Arizona State University, Martinez went on to earn an MFA at San Francisco Art Institute. He acknowledges that one of his professors at SFAI instilled in him the importance of returning to the basics. Upon graduating, he found he no longer had a studio, nor could afford one, so he stayed in the school studio and no one said anything about his doing so. He pretended that he was still a student so he would have a place to work. As if to explain the extended stay, Martinez states, “If you’re an artist, it’s really about the joy—the work—the thing that you’re doing.”

In reflecting upon his work with the Joan Mitchell Foundation’s Creating a Living Legacy (CALL) program, he addressed this opportunity as a time to look back at work and think. That fact that he “thought [he] made more paintings,” is a testament to his approach to his work. When O’Banion asked about his thoughts when painting, Martinez responded, “I don’t think, I just start. There is a spontaneity.” 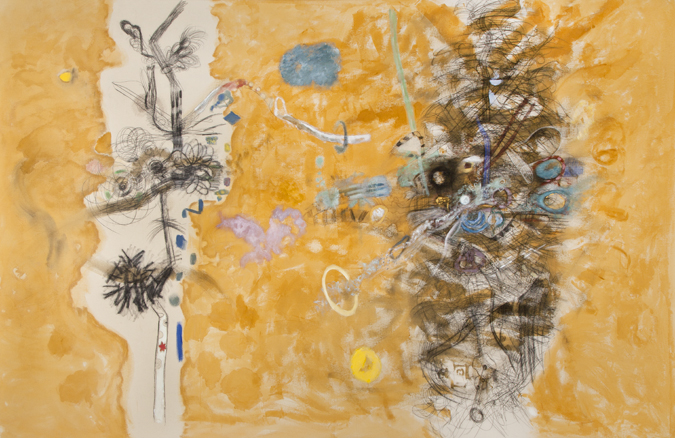 As a painter, Martinez contends that he is “always trying to figure out how to paint.” He generously acknowledges those he learned from (his professors in art school) and those who influenced him (from Picasso, Miro, and Franz Marc to the abstract expressionists), and the New York Contemporary Native American Art Movement (Native American artists who were in NYC before him), while never forgetting where he comes from.