This week’s contributing author, Diana Kamin, is a doctoral candidate in the Department of Media, Culture, and Communication at the New York University. Her broad research interests include the evolving practices of preserving, documenting, and viewing art through digital media and the media history of large-scale image collections.

Databases and websites are built using information infrastructure that requires some level of hierarchical order. Art history traditionally divides work in categories of media, areas of expertise, and neat chronological development. So how does one produce an art historical online resource for an artist whose work directly challenges notions of classification and categorization? The team of researchers working on the David Wojnarowicz Knowledge Base, part of NYU’s Artist Archives Initiative, had to tackle this question from the earliest planning stages. While the website, launched in April 2017, includes numerous features that privilege lateral connections across the site—such as searchable interview transcripts and an illustrated exhibition history—I focus on the development of our approach to the “Works” section as a way to explore how we approached this challenge.

Throughout his brief but prolific career, Wojnarowicz (1954-1992) railed against what he called the “pre-invented world,” the “official reality” whose social rules, definitions, and expectations he relentlessly interrogated in his subject matter, which sought to give voice to the marginalized. Wojnarowicz extended this anti-orthodox stance to his disregard for traditional divisions between media like painting, sculpture, and photography. He likewise worked in different temporal registers, experimenting with performance, film, and installation. When asked about his tendency to collage different media together, Wojnarowicz responded: “I was breaking down barriers, whether of time, or history, or spaces of delineations, of occurrences… They are all connected anyway, making what we project as borders invisible.”[1] Any approach to organizing Wojanrowicz’s work would have to balance the need for art historical “borders” with the artist’s conceptual approach.

When I joined the project team working on the David Wojnarowicz Knowledge Base in the summer of 2016, project leaders Deena Engel, Marvin Taylor, and Glenn Wharton had been wrestling with what was dubbed “the Wojnarowicz Challenge” with researchers for over a year. Based on the first year of research, Engel and her CS team recommended the MediaWiki platform as the best armature for the Wojnarowicz Resource. MediaWiki satisfied Engel’s goals for flexibility, low maintenance and customization needs, stability, and flexibility. Specifically, two functions native to the platform would allow us to build both lateral and hierarchical relationships between different pages, and thus between distinct works, people, and places: a category function that automates the nesting of selected pages, and a page structure that allows subsections of text to have their own linkable URL. Using these features, we knew we could create a flexible format for describing Wojnarowicz’s various artistic activities, and could engineer a thick tissue of connectors between different pages. We just needed to devise a nomenclature for his works that would be legible to our users while preserving the innovative nature of Wojnarowicz’s practice.

We decided to divide our treatment of Wojanrowicz’s work into two different portals: a general outline of artistic mediums that would provide an overview of his diverse practice, and in-depth case studies that would demonstrate his collaborative and iterative working process. The Mediums portal is divided into eight traditional categories that introduce Wojnarowicz’s use of that medium: Film and Video, Installation, Painting, Performance, Photography, Sculpture, Text, Works on Paper. At every top-level medium page we emphasized how Wojnarowicz stretched the boundaries of that medium, frequently by using his own words, and included hyperlinks to other relevant medium or people pages. Each medium is further divided into subcategories that embrace hybrid approaches. As an example, under the category of photography, we have subcategories photo-montage, photo-text collages, paint and mixed media on gelatin silver prints, film stills, and chromogenic prints and gelatin silver prints. Each subcategory has its own page, and can be linked to multiple higher-level categories. For instance, the subcategory “Photo-text collage” appears under both the “Photography” and “Text” category pages. 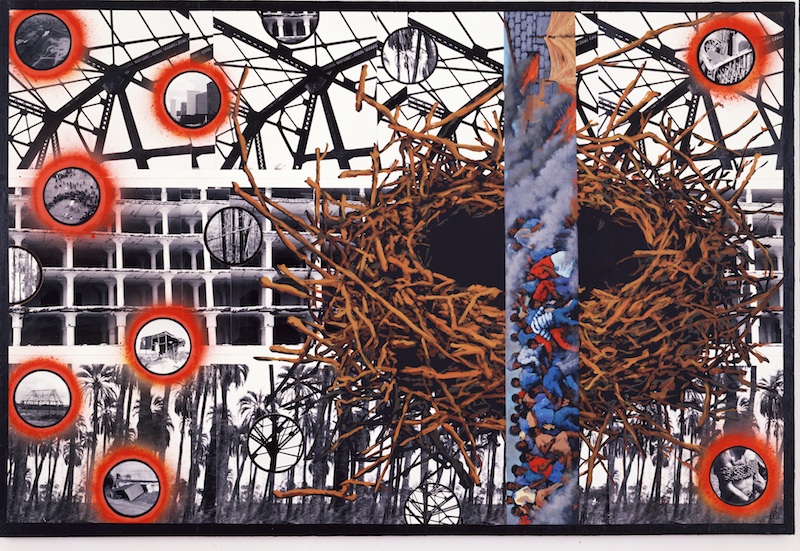 Thus, a work like Untitled (Nest), from 1989, which combines images of nature and civilization using multiple media (specifically, layering inset photographic images surrounded by red haloes and large painted scenes on top of a ground of gridded 16 x 20 inch gelatin silver prints), appears on the page for “Paint on Gelatin Silver Prints.” This page can be accessed via multiple entry points, including the Painting page, where one can read about Jean Foos’s recollection that she and Wojnarowicz had discussed methods of producing painted haloes in order to make objects pop. It can also be accessed via the Photography page, where one can read about his extensive experimentation with collaging photography. 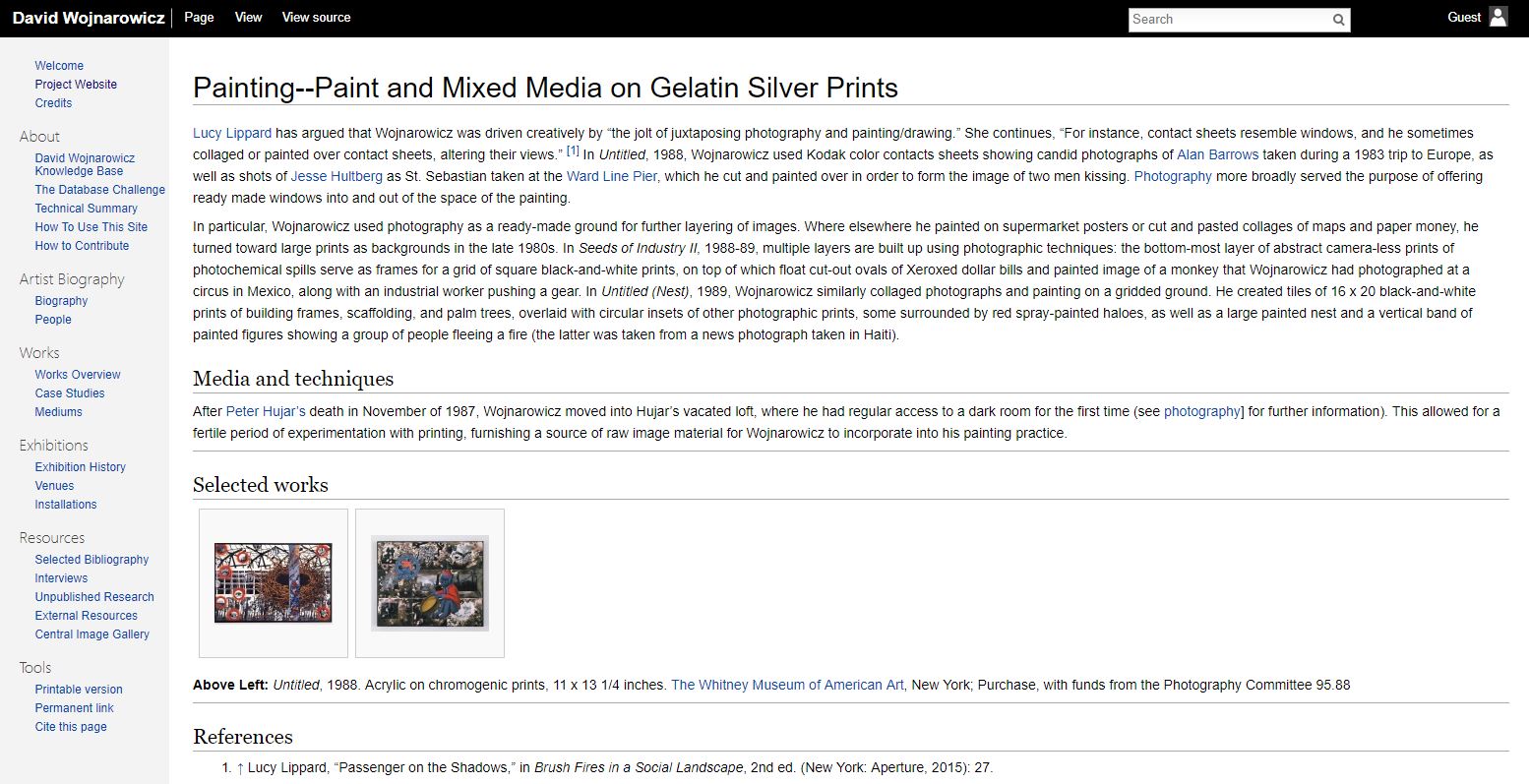 Information infrastructure tends to fade into the background, but its role in knowledge production and power is well established. Wojnarowicz spent his lifetime challenging norms and givens. Through small accommodations, transparent framing, incorporation of the artist’s voice, and a platform that allows for overlapping categories, we tried to make one small nod towards the freer, less rigid world of expression Wojnarowicz envisioned.