This week’s returning contributing blogger, Maria Bastos-Stanek, is the VoCA summer 2017 intern. Bastos-Stanek graduated with a B.A. in the History of Art and Architecture from the University of Massachusetts Amherst in May 2017.

While viewing Robert Rauschenberg: Among Friends, the Museum of Modern Art’s current retrospective of the American artist, the viewer may encounter a work that at first glance likely feels perplexing. Sandwiched between his well-known White Paintings and Black Paintings, past photographs of Rauschenberg among his famous cohort at the now mythic Black Mountain College, hangs a small drawing, notable for its lack of, well, drawing. Conservative in its physical presence, a simple blank piece of paper yellowed with age, hangs encased in a thick matte and modest gold frame. “Erased De Kooning / Robert Rauschenberg / 1953” the inscription reads. Rauschenberg produced the work by erasing a drawing gifted to him by De Kooning, an overt challenge to the ideals of abstract expressionism that would later give rise to his championing of unconventional materials and a lifelong interest in collaboration. (De Kooning had, however reluctantly, agreed to the destruction of his own work). 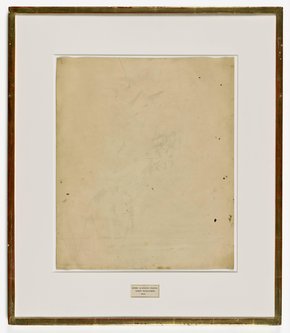 The show, though principally devoted to Rauschenberg, breaks down the long-held art world trope of the solitary male genius and instead situates Rauschenberg’s most innovative works among a legion of artist friends. Works by John Cage, Jasper Johns, Cy Twombly, Merce Cunningham, and others hang right beside those of Rauschenberg’s during key points in his career. Two small colorful drawings by Twombly, for example, establish a connection between Twombly’s ecstatic scribbles and similar marks found on the work next to it: Rauschenberg’s combine, Bed, from 1955.

The organization of the show creates a path for the viewer to enthusiastically trace the transformation of the “combine” throughout the galleries. Bed, one of Rauschenberg’s first combines, establishes a key technique of integrating found objects onto more conventional modes of art making (painting, sculpture, etc.).  The work, like the title suggests, imitates a made-up bed, hung vertically along the wall, complete with a pillow that hangs, drooping, from the top corners of the “canvas.” The wall texts notes that Rauschenberg repurposed a quilt once used as a bedspread into a canvas at a time when struggling to afford the cost of art supplies, which he makes visible on the untouched lower half of the canvas. The top half sports splashes of paint in red, white, black, blue. Scribbles resembling Twombly mark up the pillow and surrounding sheets. The work makes private life public by converting wall space into the extended space of the bed–inviting the viewer to climb into a new perspective on art.

Rauschenberg later realized the interactive potential of his combines through his experiments with technology. Perhaps no other works in Rauschenberg’s oeuvre reveal his commitment to collaboration than those created as part of Experiments in Art and Technology, or E.A.T., a collective created in 1966 by Rauschenberg and Swedish born engineer Billy Kluver among other artists and engineers to advance the field of media-based art and performance. Precisely because media-based work requires the technical knowledge and skill of a trained professional, collaboration became as much about the process as the product.

In her article for the 2017 Summer issue of the VoCA Journal, Executive Director of EAT Julie Martin writes about how the collaboration benefited both artists and engineers. Artists gained access to new ideas, materials, and the technical means to fulfill their vision, while engineers gained a necessary perspective to understand the social implications of their profession. Martin writes, “Looking back at E.A.T.’s legacy, it is clear that the ideas of incorporating non-art elements into works of art and of artist-engineer collaboration took root and have successfully become part of the culture.”  Some of Rauschenberg’s combines include cables that plug into the wall, which with the help of Martin’s article we can locate as the beginning in a lineage of technologically advanced art that the work has inspired since.

9 Evenings: Theatre & Engineering, held at the 69th Regiment Armory from October 13 to 23, 1966, is expertly documented through a long vitrine containing ephemeral evidence of E.A.T.’s inception and the performance planning. The vitrine leads into a secluded room with video documentation of each performance from 9 Evenings playing simultaneously. The nebulous connection of projections strung vicariously around the room simulates the piecemeal and fragmented qualities which performance takes on after the fact. The transition from performance to documentation is an uneven process, often dependent on the performers themselves to anticipate how the work will change over time. The vitrine includes materials about E.A.T., including artist membership forms from Allan Kaprow, Eva Hesse, Hans Haacke, and others. As the editor of E.A.T. newsletter, Martin presents a unique first-hand account of 9 Evenings and continues to play an active role in stewarding the group’s legacy today. 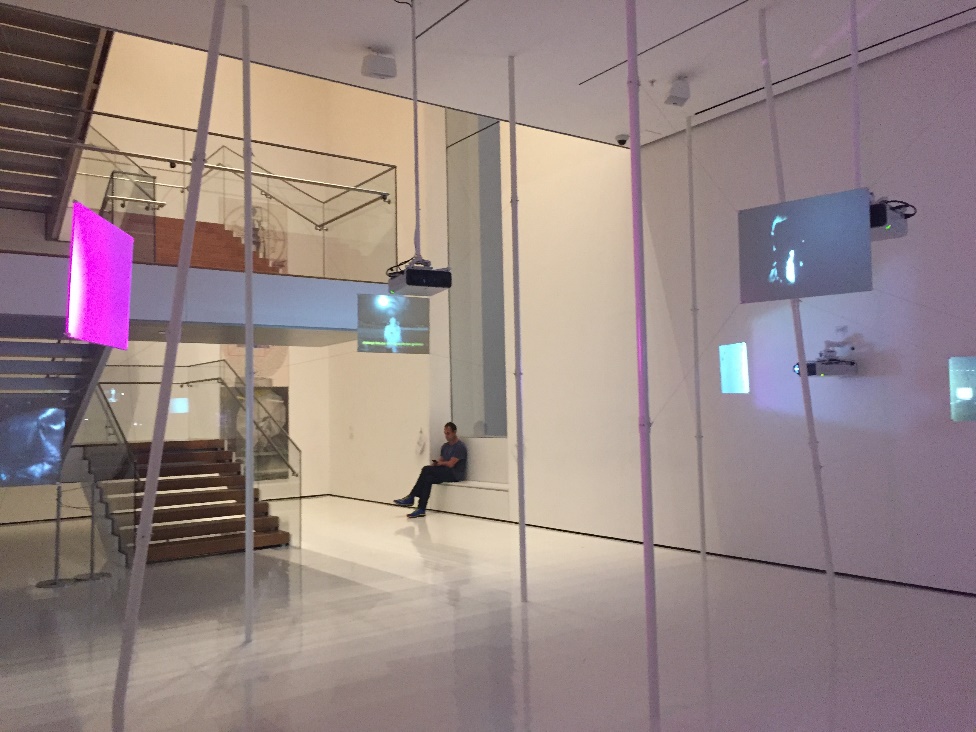 Installation view of 9 Evenings: Theatre & Engineering in Among Friends: Robert Rauschenberg, Museum of Modern Art. Image taken by the author.

By playfully subverting the ideals of abstract expressionism, the exhibition succeeds at engaging with the larger social and cultural changes of the 1960s. Rauschenberg’s art retains its impact. The presentation feels fresh, if at times unpredictable. Rauschenberg instills some of his works, such as Mud Muse, with agency, targeting its audience by splashing them with mud. This 1968-1971 collaboration between Rauschenberg and engineers contains a muddy substance made from bentonite mixed with water that bubbles up in an aluminum and glass vat, activated via sound by a compressed air system that inadvertently splashes the viewers, transforming them into collaborators. Mud Muse highlights Rauschenberg’s commitment to collaboration and innovation. (The show closes on September 17, so go see it while you still can!)