This week’s contributing author, Humberto Farias, is a professor at the Federal University of Rio de Janeiro. From 2009 to 2014 he was a member of the cultural commission of Instituto Brasil-Estados Unidos (Brazil-EUA Institute), where he curated exhibitions. In 2016, he was a visiting scholar at the Tisch School of the Arts, Cinema Studies Department’s Moving Image Archiving and Preservation course, where he attended the Handling Complex Media class, at the New York University. 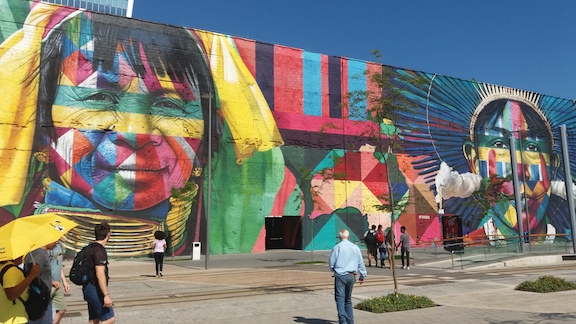 My first technical and professional contact with the conservation of contemporary murals occurred through my participation in the Approaches to the Conservation of Contemporary Murals workshop. By request of the workshop organizers and in order to initiate discussion, I presented on a mural in the city of Rio de Janeiro (Brazil) by the artist Kobra.

Currently in Brazil, there is an intense and complex discussion about the conservation of murals. On the one hand, Rio de Janeiro’s mayor ordered a huge mural by Kobra to be displayed in a region of the city that had been revitalized for the 2016 Summer Olympics, becoming an area of cultural interest and great tourist visitation. On the other hand, São Paulo’s mayor has recently had a large Kobra mural painted over. The mural displayed the city’s history in the 1920s and 1930s, and had been ordered in 2009 by the former São Paulo city council to celebrate the city’s birthday. With works by Kobra and other graffiti artists, Avenida 23 de Maio (23 de Maio Avenue) became the largest mural in Latin America.

However, as mentioned above, São Paulo’s current mayor ordered it to be covered, arguing that the murals “smudged the city”. This authoritarian and ignorant posture by the administration of the country’s largest city brings up the problems and the need to discuss public policies for the conservation of murals in Brazil.

The mural by Kobra that I discussed in the workshop, called Etnias (Ethnicities), displays five different ethnic groups from the five continents: the Huli from New Guinea, Oceania; the Mursi from Ethiopia, Africa; the Kayin from Thailand, Asia; the Supi from Europe; and the Tapajós from the Americas. The colors used by Kobra on the mural allude to the Olympic arches, which, in turn, are also a symbol of peace and unity among people. It is worth remembering that Kobra has murals in several cities around the globe, including New York, Chicago, Rome, and Berlin.

I returned to Brazil with a wealth of experiences with great names of the art world and the preservation of murals, which largely impressed me, such as the testimonials of Olivia Gude, Jon Pounds Jeff Huebner, John Pitman Weber, Damon Lamar, and Bernard Williams. They spoke about the critical and historical aspects of art, as well as the experiences of the artists who restored the presented murals. These issues showed how important it is to consider values of culture, property, time, use, authenticity, and aesthetic, among others that involve artists and the whole community. I could also contemplate the works of the conservators Will Shank and Leslie Rainer, who presented pertinent questions concerning the techniques and procedures of conservation of the murals studied in Chicago and in specific case studies of conservation of the murals in Los Angeles and Barcelona. 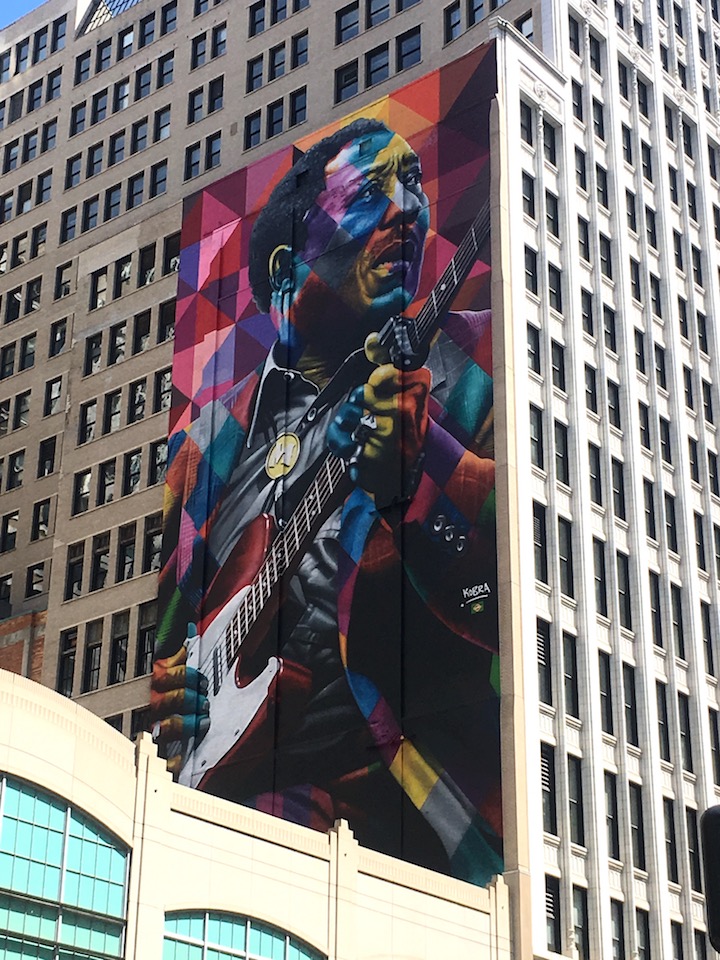 I also came in contact with technical procedures and the use of several conservation materials that were new to me, such as Golden MSA varnish used to fix the pictorial layer and to provide protection against the actions of time. Other participants also addressed the issue of using coatings to protect the murals from vandalism. Furthermore, I had the opportunity to see works of the artistic production of murals in Chicago; and, finally, I could enjoy the friendly and generous professionalism that involved all of us participants. The workshop was also an opportunity to consider many problems found – as well as proposed solutions – by conservation professionals from various locations in the United States and other countries, such as Canada regarding the treatment of a mural that was vandalized and Spain in the reconstruction of a mural by Keith Haring in Barcelona.

I hope that this initiative will be multiplied and that more professionals in the field of conservation of contemporary art will have the opportunity to obtain new information, exchange experiences, and promote the strengthening of the partnership spirit and reciprocal support in this field.

VoCA is pleased to present this blog post in conjunction with “Approaches to the Conservation of Contemporary Murals”, a two-day workshop that was held during the 2017 AIC Conference in Chicago. The program focused on visits to outdoor community murals in Chicago from the past half-century, in various states of preservation. Presentations and discussions by artists, community members, and conservators regarding various approaches to conservation, treatment, repainting, or renewal of these public murals were a key component. For more information, click HERE.