This week we are pleased to introduce two new contributing writers: Amber Kerr and Rebecca Rushfield. Amber Kerr is paintings conservator at the Smithsonian American Art Museum’s Lunder Conservation Center. She has served as an elected member to the IIC Council for over seven years, is editor for the IIC social media pages, and is actively engaged in public outreach and raising awareness to issues related to the conservation, preservation, and protection of cultural heritage and works of art. Rebecca Rushfield, a conservation consultant based in New York City, received her conservation training at the Conservation Center of the Institute of Fine Arts, NYU. She has a particular interest in the history and public understanding of conservation and is the Associate Director of the FAIC Oral History of Conservation Project. 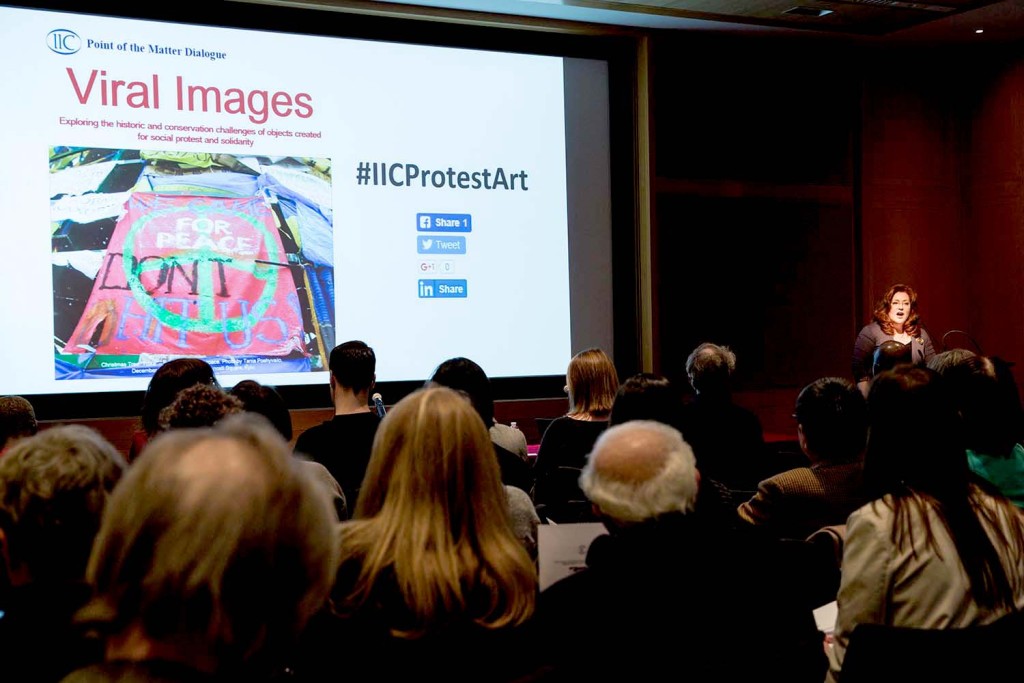 Welcoming remarks to the dialogue by Amber Kerr, IIC Council Member and Co-coordinator for the IIC Point of the Matter Dialogue Series.

On Tuesday February 14, 2017, the International Institute for Conservation (IIC) held the tenth program in its Point of the Matter Dialogues Series, “Viral Images: Exploring the historic and conservation challenges of objects created for social protest and solidarity”, in the Bonnie J. Sacerdote Lecture Hall of the Metropolitan Museum of Art. The IIC Dialogues Series was established in 2008 to facilitate interdisciplinary discussions of emerging issues in the modern world and the relationship of those issues to the preservation of cultural heritage.

The half day program brought together representatives of the communities that create, promote, collect, and protect the objects of social protests: artist and educator Gregory Sholette, founding member of Political Art Documentation/Distribution and Associate Professor, Sculpture and co-founder of Social Practice Queens (Queens College, City University of New York) ; Aaron Bryant, Mellon Curator of Photography at Smithsonian National Museum of African American History and Culture; Lidia Uziel, Head of the Western Languages Division (WLD) and Bibliographer for Western Europe at the Harvard Library; Ralph Young, Professor of History, Temple University; Michael Gould-Wartofsky, sociologist and author; and Christian Scheidemann, conservator and founder of Contemporary Conservation Ltd. Each made a short presentation laying out his or her perspective on the impact and archiving issues of the staggeringly large and ever-growing number of objects made for social protest. This was followed by a spirited hour-long discussion sparked by questions from the audience. In order to open the program to a worldwide audience, the program was broadcast live on the IIC website and viewers were encouraged to submit comments and questions. A video of the presentations and discussion can be viewed at https://www.iiconservation.org/node/6757 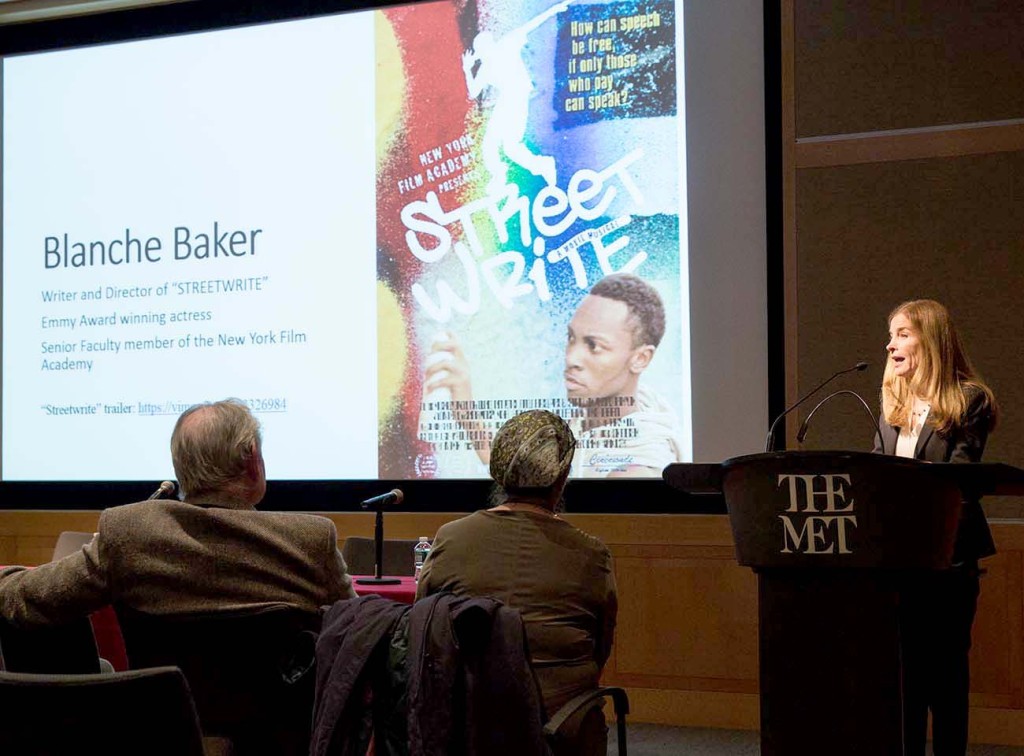 The event opened with a premier trailer for “STREETWRITE”, a film written and directed by Emmy-award winning actress Blanche Baker, pictured here as she introduced the film on protest street art.

The program was preceded by the preview of the trailer of the movie musical “STREETWRITE”, written and directed by Blanche Baker, and a twenty-minute performance by Rebecca Goyette, Kenya (Robinson), and Brian Andrew Whiteley of “Artists Fighting Fascism”. These demonstrated how art is created as an expression of protest or outrage and provided a context for the dialogue.

Gregory Sholette focused on the largely ephemeral works of the 1980s New York art collectives, following their path from the street into the Museum of Modern Art  where they are now “fine art”. Aaron Bryant discussed how the African American community has used images for the purpose of social protest and how these images resonate even decades later. Lidia Uziel noted that Harvard University Library has a history of collecting materials which document social and political movements  and showed how the Library is documenting a particular moment in the 21st century with its archive of “Je suis Charlie” and “Je ne suis pas Charlie” material collected in the aftermath of the attack on the offices of the journal, “Charlie Hebdo”. Ralph Young traced the history of dissent in the United States illustrating how protest is a central American trait. Michael Gould-Wartofsky discussed how social media was used to spread the images of the Occupy Wall Street movement, noting that because so much of the material created by the protestors was carted away by the New York City Sanitation Department after the occupiers were evicted, the digital archive of images is all that remains  many of the physical objects.  Christian Scheidemann  stressed that art works created for social protest are foremost political and social materials, so the conservator treating them must keep the power of the material in mind and not just treat surfaces. 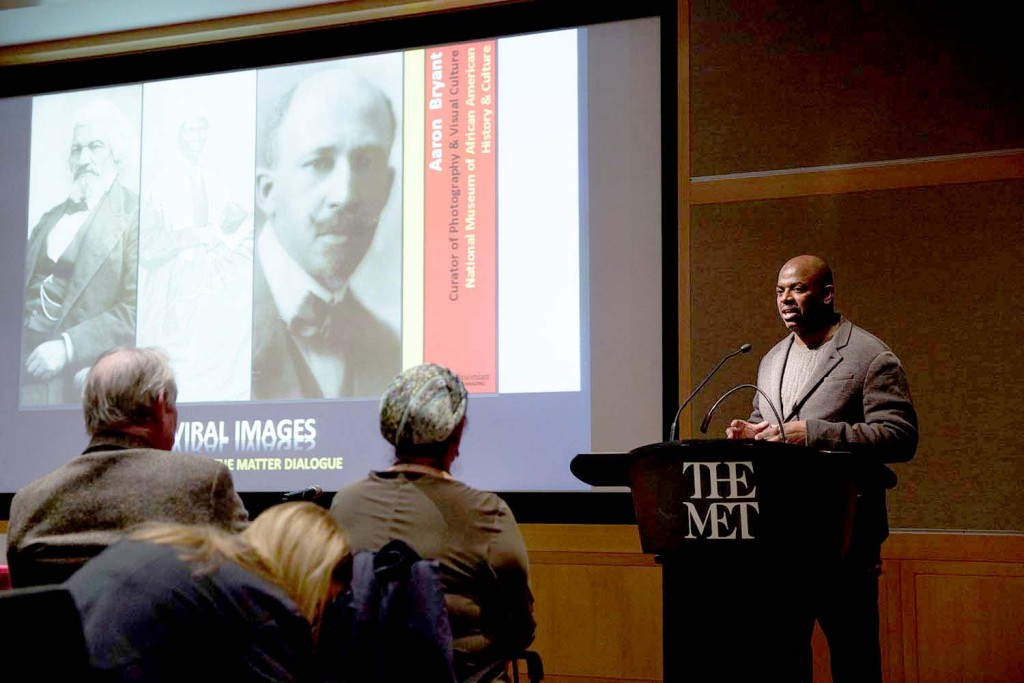 One of the featured panelists was Aaron Bryant, Curator of Photography for the Smithsonian National Museum of African American History and Culture (NMAAHC).

During the hour long discussion, many questions were raised by members of the audience, several of which had great urgency: What does a protest look like and what do its artifacts look like? Is the physical object necessary or is a digital representation enough? When dealing with material created for social protest, is objectivity possible? Who gets to decide what is saved and what is destroyed; what is art and what is vandalism?

The IIC dialogue exploring the historic and conservation challenges of objects created for social protest and solidarity began a discussion that needs to and will continue as the number of social protests increase and the number of artifacts they leave behind grows exponentially. The IIC is grateful for the donors who made the web streaming of this event possible with support donations by Carol Mancusi-Ungaro, Sarah Staniforth, Valentine Walsh, Mark Golden or Golden Paints and the individuals who made contributions through our JustGiving and Eventbrite crowd-funding campaigns.

To learn more out past dialogues and for the announcement for our next Point of the Matter Dialogue at the 2018 IIC Congress in Turin, Italy, visit our website at https://www.iiconservation.org/dialogues.

All photos by Stephany Fernandez, courtesy of the New York Film Academy.