This week’s contributing blogger, Heyeon Kim, is a first-year M.A. student in Art History at the Institute of Fine Arts, New York University, focusing on global modern and contemporary art. She received her B.A in Art History from the University of Michigan. From 2013-2016, she oversaw the Overseas Artists Section at the annual Asian Students and Young Artists Art Festival in Seoul, Korea, working closely with numerous young contemporary artists from all over Asia.

On November 21, 2016, Daniel Rozin delivered a lecture entitled “Creating Digital Interactive Sculpture for the Long Run” at the Institute of Fine Arts (IFA) as part of the lecture series “Topics in Time-Based Media Art Conservation”. As an interactive artist and an Associate Arts Professor at the Interactive Telecommunications Program (ITP) in the Tisch School of the Arts at New York University, Rozin shared his thoughts on conservation practices and the challenges of interactive art. Originally trained as an industrial designer, Rozin started creating his own works of art after realizing the potential of using technology to express his creativity rather than his clients’. Since then, he has been simultaneously practicing his own art and teaching students at the IPT how to utilize technology as a tool for self-expression and empowerment.

The lecture was followed by a conversation with Christine Frohnert, conservator of contemporary art, co-founder of Bek & Frohnert LLC in New York, and an Adjunct Professor and Time-Based Media Art Program Coordinator at the Conservation Center of the IFA. This discussion provided further insights into the future of technology-based art as imagined from current projects at the ITP.

Rozin began the lecture with a survey of his work, including Video Paintings, Mechanical Mirrors, Software Mirrors, Glass Sculptures, and Proxxi Prints, which explore the relationship between human and machine and how images are created. His mechanical and software “mirrors” create reflections of viewers in front of the work in unexpected and often playful ways. Rozin works with such a wide variety of materials, ranging from wood, glass, or metal tiles to more unique items such as oriental fans, trash, stuffed animals, and troll dolls. This creative use of materials differentiates his works from those by other artists’ that also reflect viewers’ figure and motion. However, this also poses a conservation problem as those distinctive materials may be hard to replace in the future. 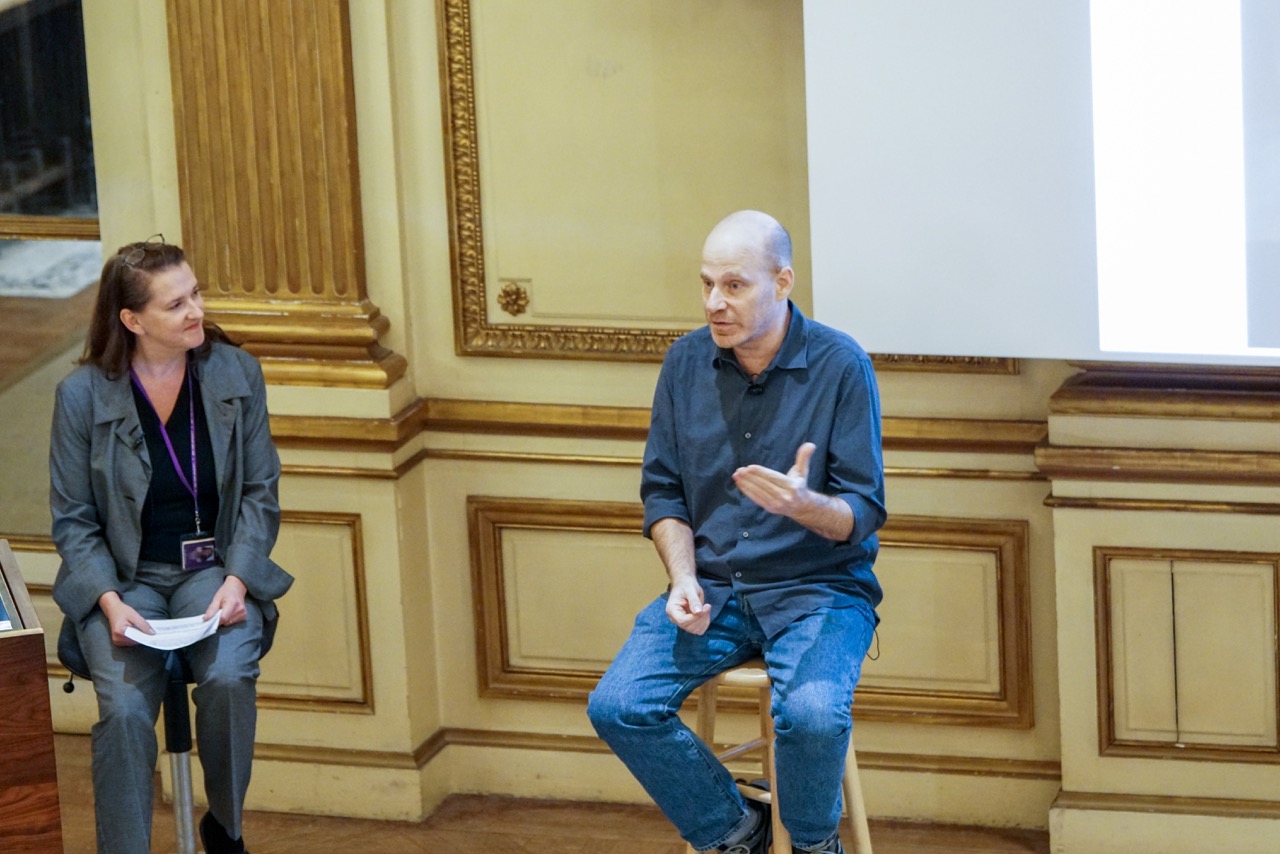 As if to further emphasize Rozin’s role as an interactive artist, the lecture was full of conversations between the speakers and the audience. Rozin openly discussed his current practices in documenting and maintaining his works, as well as what he is planning to improve in order to ensure their longevity. In addition to physically repairing and upgrading his work’s software, he tries to secure spare parts, archive his software, and use off-the-shelf equipment for collectible editions as much as possible.

While he is extremely meticulous in programming, physical building, and installation of his works, he is also very much open to sharing technical information with institutions and collectors; he provides them with spare parts, schematics, source code, and relevant drawings. Considering that he works entirely alone with no assistants or engineers, the sharing of such information seems crucial in conserving his works into the future. More surprisingly, Rozin also allows collectors to modify the front and back end of the works through user interface; for example, collectors can change the length of “straws” in Darwinian Straw Mirror (2010). Yet, at the same time, Rozin makes sure that fundamental parameters remain unchanged. The issue of authority and authenticity of his works is therefore highly complicated.

Until now, institutions and collectors have in most cases consulted with Rozin regarding any potential transformation of his art, but the integrity of his works may increasingly depend on trust and responsible collaborative efforts among various shareholders in the future. The question remains: How much change, and by whom, should be allowed?

VoCA is pleased to present this blog post in conjunction with the NYU/IFA Conservation Center’s Topics in Time-Based Media Art Conservation lecture series, happening on Mondays during the 2016 Fall semester. The series is organized by Hannelore Roemich and Christine Frohnert and is generously supported by the Andrew W. Mellon Foundation. The full schedule can be found at https://www.nyu.edu/gsas/dept/fineart/events/time-based-media.htm