This week’s contributing blogger, Claudia Weber, is a New York based artist whose work often combines photography with other media to provide an alternative narrative to a space’s established role. For more information, please visit her website at www.claudiaweber.net.

When I could no longer afford an artist-studio in Brooklyn and started to work in my apartment, I became very invested in the concept of the domestic. This focus emerged from my general interests in the culturally designated roles associated with this specific category of place as well as from the practical and ideological difficulties related to working in a domestic setting. It also arose from the fact that, over the last decades, investors and real estate companies have turned residential (and commercial) buildings into assets for lucrative, high-return investments, thus changing the very meaning of this term. What happens to the idea of home, in itself already a complex issue, when one literally lives in someone else’s financial speculation? And what becomes of the domestic, still largely (if anachronistically) regarded as synonymous with female occupation and traditional family values, when financial pressures and work-related exhaustion arising from the skyrocketing costs of living—as well as the increasing commodification of private lives and inner experiences through the proliferation of social media and the internet of things—become chronic conditions?

For the People of New York City (exhibition poster by Lutz Bacher); Race Together (Starbucks campaign); House Beautiful Magazine; Not At Home (by Christopher Reed); The Soul at Work (by Franco “Bifo” Beradi); The Making of the Indebted Man (by Maurizio Lazzarato); Notepad; Working from home.

These questions, together with my ongoing research into the histories, movements, and concepts of specific “visionary” houses, led me to the idea of Sterling Music Room, which has transformed the living room of my Crown Heights apartment into an exhibition space and salon for planned and improvised events and chance encounters. Initiated in April 2016, its programming includes exhibitions, performances, live concerts, readings, film screenings, storytelling, social experiments, dinners, and more.

While the music room offers its participants and guests an intimate and enjoyable surrounding in which to meet and socialize, it also wants to encourage them to think critically about both the home and the possibilities of creative praxis under the current conditions of late capitalism, particularly with regard to the excessive luxurification of New York that is symptomatic of globalized income inequality and real estate speculation. As a means to address these issues, Sterling Music Room intentionally invokes historically upper- or leisure-class settings (the music room, the exhibition space, and the salon), but shifts their parameters and conventions by applying them to a rent-stabilized apartment, where they now function as a framework for discussions about unsustainable rent hikes, the declining availability of affordable and middle-class housing, and the pressure it puts on the city’s population, its creative practitioners, and the cultural landscape they are part of. 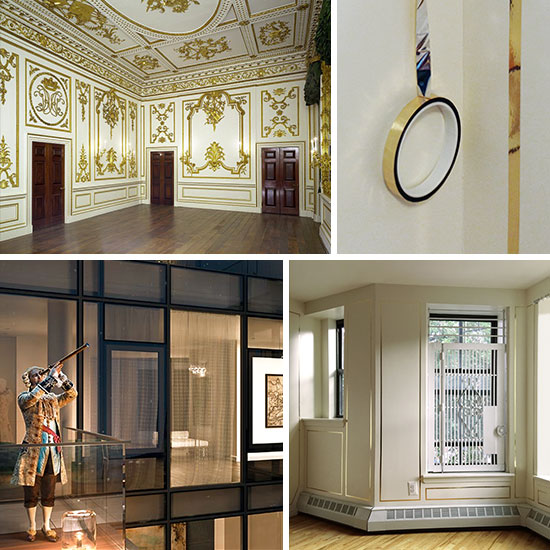 Sterling Music Room should not be misunderstood as an apartment gallery, nor that its program is limited to music (a common, if understandable misconception of this historical room type). Instead, it operates as an ambiguous and unfixed space that challenges participants to explore the impact of a residential and domestic setting on their work while resisting, if only temporarily, the pressures and expectations of the (art) market. Playfulness, experimentation, and failure are as much part of the mix as are poetic and obscure approaches, or conceptual rigor. This also means that the space is in constant transformation. Being shifted, in one instance, from a casual to formal interior to contemplate the life cycle of paintings (La Maison De… by Joyce Kim), it is the domestic space itself that changes a planned work’s outcome in another (works by Rick Myers). Means and Ends, a video by Bonnie Begusch, which has switched places and formats during its screenings, offered guests varying experiences. And in her October 16 performance Is this Your Place?, dancer and choreographer Joanna Kotze responded to the space with the experience of someone who almost lost her long-time apartment a year ago. These activities are complemented by social experiments like Take a Break (organized by Jeff Sims and Claudia Weber), which asked people to interrupt their daily routines and work demands by spending a standard work day (9am-5pm) in the music room indulging in the vanishing concept of unstructured time. 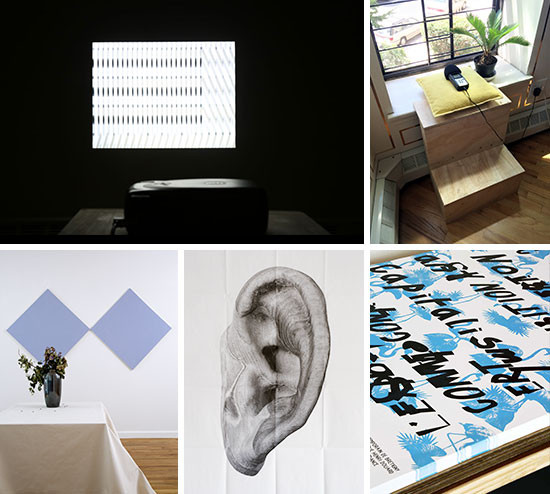 In 2017, following the conclusion of Sterling Music Room’s program, I will team up with a graphic designer to begin work on a related book project. Planned as an integrative part right from the beginning, this publication will not only include documentation of exhibitions and events, but will also reflect on the activities and interactions that took place around them, thus addressing the project’s complexity and context. I plan to commission several writers to address selected topics to complement the program, such as the tension between the professional and the personal under the social and economic imperatives of self-promotion, and the materials, configurations, and aesthetics of contemporary urban residential architecture. I envision the Sterling Music Room publication as a document that records and reflects on the community and living room activities of a middle class artist in 2016, who balances jobs, art and life in a luxurifying New York. But it is also intended as a means to bring the ideas and perspectives that came out of this project to a wider audience, and to encourage the continued exploration of the issues that it raises.

Future events will feature over-sized cards and happenings by Total Effekt (Stina Löfgren, Aron Kullander-Östling, Pål Rodenius), as well as a kinetic sculpture by Matthias Neumann, that will accommodate a program of short lectures and dinner. 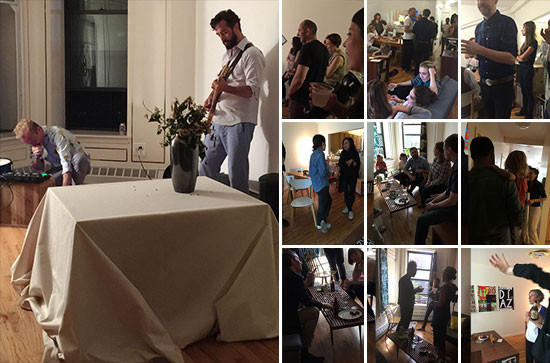 Left to right: Performance by lumberob and dan; Guests at Sterling Music Room

Past documentation and information about upcoming events can be found at www.facebook.com/sterlingmusicroom.