This week’s blogger, Jonathan Allen, is a painter, performer, and curator who frequently collaborates with poets and dancers. 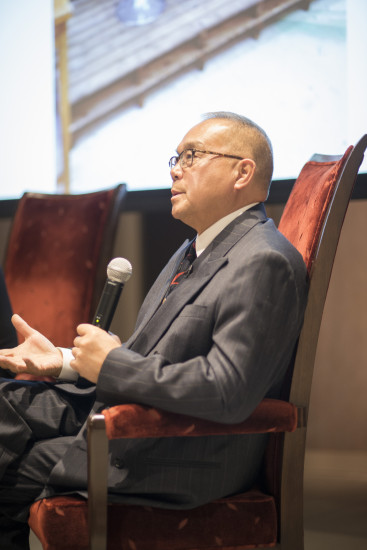 This highly animated, colorful evening of conversation with Arlan Huang [held on October 30, 2015 at the Joan Mitchell Foundation Research & Education Center] was captivating, rich, and full of personality. Mr. Huang was beyond generous, and surprisingly revealing: family anecdotes, quips about the plight of the artist and the creative process, philosophical digressions, and a brutal honesty about the challenges facing minority artists filled the room. At times I felt like I was having a one-on-one with someone who was actually speaking to a standing-room only crowd. Beth Krebs, Arlan’s digital archivist through the Joan Mitchell Foundation’s CALL Program, along with Robin Clark from SFMOMA, shared the stage, and the thoughtful, relaxed banter between them was a refreshing foil to the pretension and posturing that too often stilts artist talks.

Mr. Huang’s candor about art and life carries into his paintings, where materials and process achieve a poetic presence. Discussing All Paws, a 1984 painting series, he commented that “Abstraction and figuration are all kind of the same.” This frank acknowledgement of the elasticity between visual languages is rare for a painter, and underscores an openness in Mr. Huang’s process that is, simply put, enthralling. In All Paws, and the marvelous Opium Smoker (1984), recognizable imagery coexists and fluidly lives with lovingly abstracted surfaces and spaces.

The ‘harrowing process of being an artist’ was a recurring theme over the evening, yet over his career, Mr. Huang has consistently taken creative risks in the face of adversity, rather than retreating into angst or self-obsession. A case in point is his insistence that artists should “change mediums, try something else” when they are struggling or lost. For him, glass blowing became an antidote to the “solitary, insularity quality of painting,” and he pursued an entirely new body of work in glass, beginning in the 1990s. Viewing images of his 2004 Blue for Yellow series of sandblasted blown glass led Mr. Huang to comment that the glass blowing process is social and that you are “working as a team.” This became clear in ambitious installations such as Suddenly Laughter, and Blown Glass in Glass Blocks at PS 152, where he worked with his principal glass blower (who also happened to be in the VoCA audience). 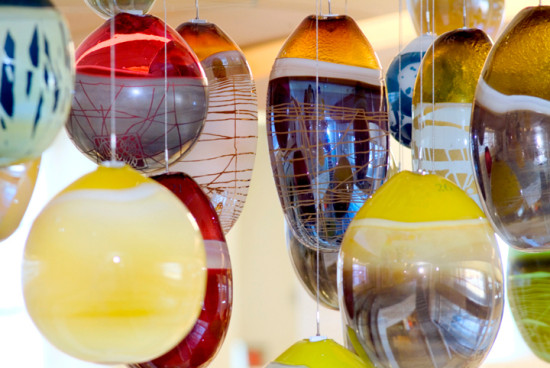 Mr. Huang moved to New York to get to know his grandfather, who lived on Mulberry Street in Chinatown. This inquisitive, personal approach to family, identity, and the Asian-American community was reflected throughout his VoCA Talk, and Mr. Huang’s deftness and lightness of touch when dealing with questions of identity politics is markedly savvy. Several times over the course of the evening, he remarked that was interested in “distilling Asian-American identity into a contemporary form,” adding this is “not community art.” Asian imagery and iconography crisscross through his oeuvre, appearing and reappearing in paintings of the Chinese American movie star Anna May Wong, or in the use of the Chinese phrase 10,000; in 1993, he created a replica of his grandfather’s Chinatown apartment, titled 100 Smooth Stones for Grandfather.

As he put it, a consistent question then becomes ‘How to be free?’ In an art industry that often limits and marginalizes artists of color, Mr. Huang’s response is one of verve and defiance. For him, “fighting stereotypes, embracing them, making them larger” has proved an answer, as does staying open to moving between questions of identity and abstraction throughout multiple media. It is a dance, one successfully and forcefully choreographed over a visual arts career that spans decades.