This week’s contributing blogger, Desi Peters, is a 4th year graduate student at the Conservation Center of the Institute of Fine Arts, NYU. She wrote her MA thesis on the conservation of artworks by contemporary artist Dario Robleto. She is currently completing her graduate internship at the Smithsonian American Art Museum in Washington, DC.

A conference organized by NeCCAR and hosted at the Glasgow School of Art, Glasgow, Scotland 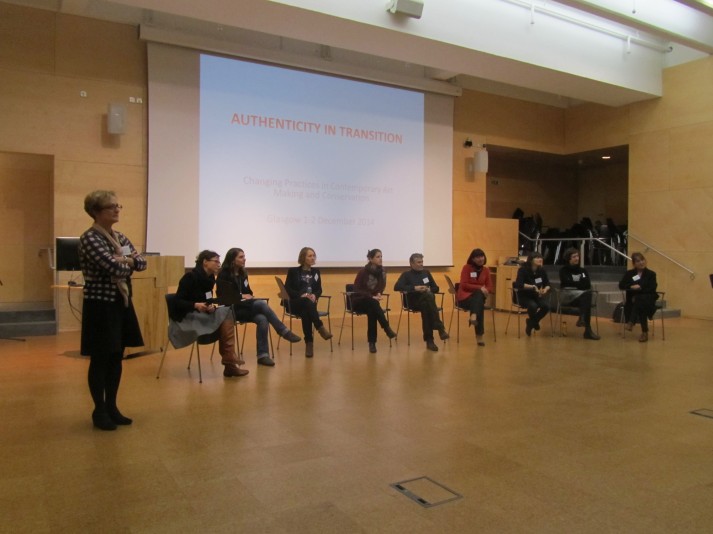 In the twentieth century, conceptualism and the availability of new materials broadened the definition of art to include works in which the idea is more important than the materials and the original design accounts for ephemerality and reproduction. These new material languages have led to a shift in museum and conservation practices, which responded by becoming increasingly interdisciplinary and ethically provoking. This past December, the Network for the Conservation of Contemporary Art Research (NeCCAR) held the last of a series of three international conferences that aimed to address these changes and their implications. The conference had a comprehensive schedule that comprised eleven presentations and nine short poster talks on the first day, and fourteen presentations and three shorter talks by artists on the second day. There were discussions after presentation panels on both days. A preliminary program can be found here.*

As the tile of the conference suggests, the presentations evoked compelling questions regarding authenticity and authorship. Dr. Muriel Verbeeck and Nico Boers resolved issues of authenticity spurred by an aging of materials in one version of Cloaca (2000-07), by Wim Delvoye, through interviews with the artist. Jean Brown took a historical look at how the legalities of authenticity are impacted by connoisseurship, instrumental analysis, and the art market. Jennifer Hickey illustrated how Jasper John’s involvement with Robert Rauschenberg’s Black Painting (1952) called into question original state as the benchmark of authenticity. 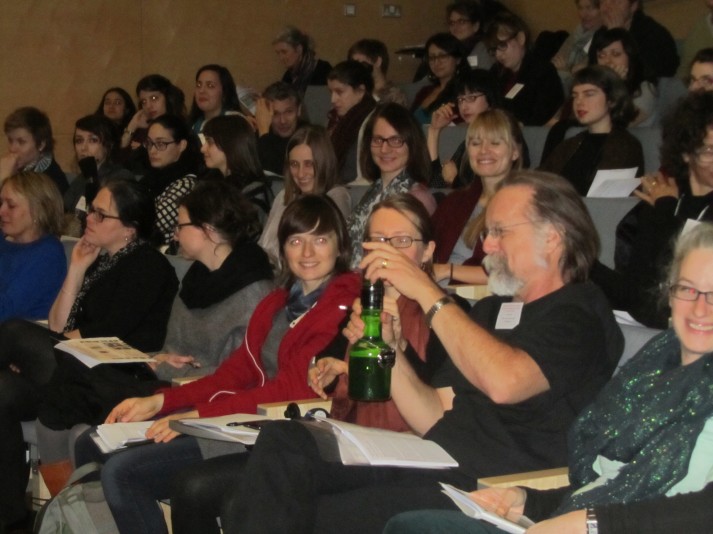 A large bottle of “Poison,” a perfume by Christian Dior, is passed among the audience during a presentation by Clara Ursitti. Photo Credit: Erma Hermens

Other presentations focused more specifically on the impact of modern and contemporary materials on museum and conservation practice. Ellen Jansen identified how the exhibition of artworks featuring phosphorescent paint, whose afterglow requires ultraviolet light in order to be seen, can impact the ageing of its pigments. Joanna Shepherd explained how the potential obsolescence of components in Julian Opie’s Suzanne Walking in Leather Skirt (2007), an LED sculpture, identified a network of diverse stakeholders relevant to its ongoing care. In her keynote address, VoCA Board President Dr. Jill Sterret explained how interdisciplinary spaces in SFMOMA’s upcoming expansion, which meld artist-studio with exhibition area with archival storage, offer visitors effective modes of interpretation, dialogue, and exchange. 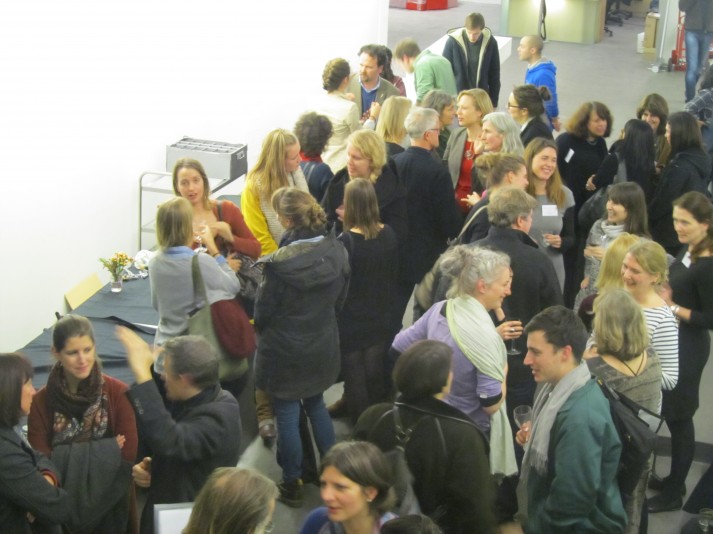 Conference attendees mingle in the entry hall of the Glasgow School of Art at the close of the first day. Photo Credit: Erma Hermens

The many discussions brought George Brecht’s observation that “an object is an event” to the fore. Whether an old master painting or a time-based media artwork, all objects undergo changes in time—they are distinguished by their rate of change. In addition to its provoking content, the conference featured a comfortable environment that encouraged exchange among attendees. Students of varying disciplines milled about common-areas while student artwork on sale provided early holiday shopping opportunities. There was a little something for everyone, it seems.

*The poster presenters and artists are not listed on the above website. They are:

Ellen Jansen: “Go with the Glow. Difficulties in the conservation and exhibition of phosphorescent artworks from the sixties”

Valentina Perzolla: “How to make INNOVATION collaborative in contemporary art”

Desi Peters: “Conservation through conversation: material and meaning in the work of Dario Robleto”

Álvaro Solbes García: “Shifting authenticity, recovering originality repaint as a critical methodology for the conservation of outdoor sculptures. The case of the monumental sculpture Ehécatl”

Stoupathis Konstantinos: “The distance between the authentic artwork and the authentic meaning: the beliefs of four contemporary artists about the ageing of their works, considering possibilities for future conservation”