This week’s contributing blogger, Gwynne Ryan, is the Sculpture Conservator at the Hirshhorn Museum and Sculpture Garden in Washington DC, focusing on the preservation of modern and contemporary sculpture and time-based media. She is a member of the VoCA Board of Directors, and she served as Chair of the Program Committee from 2007-2010.

In the spring of 2013, the artist Kota Ezawa was interviewed as part of the Hirshhorn Museum’s Artist Interview Program to discuss his slide-based artwork History of Photography (Remix) (2004-06).  This was a key discussion to have in light of the impending obsolescence of slide technology.  While Kota has been interviewed in the past about this particular work and its meaning, we were more interested in understanding the artist’s perceptions of the artwork as it evolves with changes in technology. As such, we approached the interview with the hope that the artist’s input would help inform us about the options for long-term preservation of this piece. 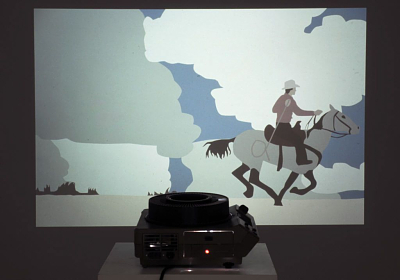 For those of you not familiar with this artwork, History of Photography (Remix) is an installation that consists of a slide projector that is placed in the middle of the gallery and projects 40 digitally rendered images of iconic photographs onto a single wall, switching every 4 seconds in a continuous loop.  Among these images are a number of recognizable snapshots, including that of Patty Hearst captured by a security camera during the 1974 Hibernia Bank Robbery and the view of the earth from the moon taken during the 1969 lunar landing.  The photographs, however, are no longer photographs, but have been re-drawn by the artist through hand tracing and computer manipulation, reduced graphically into flattened planes of color, and then printed as slides.  As is standard for the display of film and slide-based works, the original master slides are not used for display, but rather, a series of exhibition copies are created using the masters as a standard.  In this case, the original masters exist as both a set of TIF files and a set of analogue slides: the TIFS are used to make the exhibition copies and the master slides are kept in cold storage to use as reference for any new exhibition slides that are made.

However, even since the last time this installation was on display— less than 5 years ago— the accessible options for making the exhibition copies of the slides have dwindled.  Slide mounts, printing processes, and film stocks have either changed or disappeared altogether.  And these factors affected the quality and look of the artwork, moving it farther away from the original appearance of the masters.  We needed to know at what point this shift would become an issue. 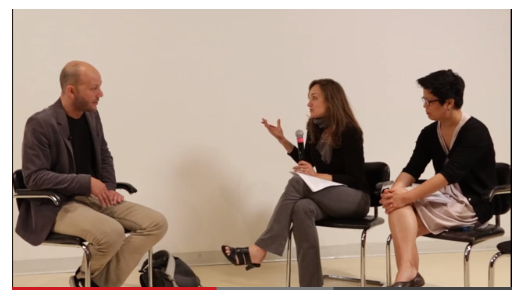 Kota generously offered to share his time and join us in the galleries.  For the first part of our discussion, Assistant Curator Melissa Ho, Time Based Media Coordinator Sara Gordon, and I were able to look at the projected images with him.  Here, with projector running through its cycle, our goal was to discuss all the different things we were seeing with the slides. The dark gallery space and the loud hum and click of the projector did not make recording this part of the conversation an easy task. However, we were able to successfully discuss the importance of the presence of the projector in the middle of the space, the associated sounds, and the gradual collection of dust on the surfaces of the slides, all of which add up to create the total genuine experience of viewing the installation.

From there, we moved onto discussing the more nitty-gritty elements of mounts and color fading and how anti-Newtonian glass affects the overall look of the large flat planes of color in his drawings.  Kota seemed genuinely pleased to be talking about these aspects of the work that are not commonly brought up in interviews.  At one point he stopped mid-sentence to say: “It’s so nice to have this conversation because nobody ever talks to me about the dust or the scratches.  They talk about ‘why this image and why not this image?’ or ‘What about [the image of] Sherry Levine…?’ and this is more technical.”

After this discussion, we left the galleries and moved to a more formal setting in order to delve deeper into Kota’s overall process and the use of the slide projector in the broader context of his artwork. It was fascinating to hear him describe his own, thoughtful take on how he approaches each step in the creation of his artwork and his relationship with various photo labs and the range of display options he sees for his pieces. He surprised me with his comments, too, suggesting that the loss of his artwork through obsolescence is a ‘self-editing process’ of his artwork.  But then, Kota turned the onus of preservation back around to us as caretakers of these works, saying that if the idea behind the artwork is strong enough, there will be experts making sure it is kept alive.