This week’s contributing blogger, Nancie Ravenel, is the objects conservator at Shelburne Museum in Shelburne, VT. Though she mostly works on things made in the nineteenth and early twentieth century, every now and then a work made by a living artist creeps into the mix. 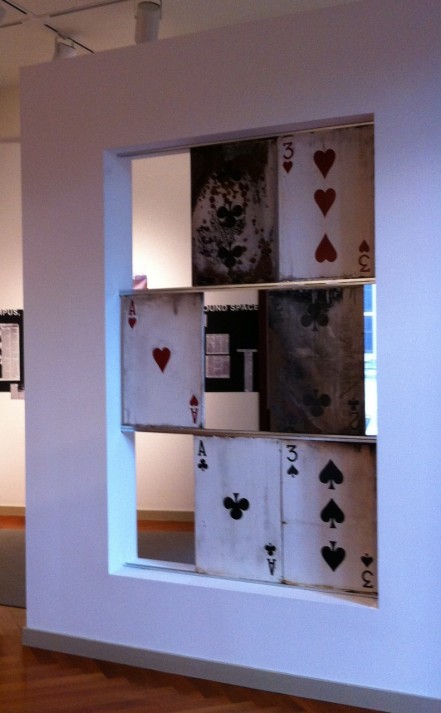 The original, vandalized cards from the face of “Way Station I (Study Chamber),” now on view in the Middlebury College Museum of Art

On November 7, 2013, Vito Acconci returned to Middlebury College to see the recently completed reconstruction of a work he designed in 1983. The story of this piece and why the Middlebury College Museum of Art chose to build a reconstruction has been covered recently by a number of venues, but, I will recount it briefly here: Way Station I (Study Chamber) was Acconci’s first outdoor work and his first permanent commission. It was a small trapezoidal-shaped steel structure with sliding tiles painted to look like playing cards on the slanted face; one could enter this structure through a door and descend a set of stairs to a desk and chair.  The piece was situated on the Middlebury College campus alongside a sidewalk that ran by a group of dormitories and meandered off toward (what was then) the edge of the campus. Unfortunately, the structure was repeatedly vandalized and ultimately destroyed with a blow torch in 1985.

The reconstructed piece, entitled Way Station II (Study Chamber), consists of the restored shell from the original structure, and replica sliding tiles. It sits nearly at the opposite end of campus from where Way Station I (Study Chamber) had been, situated between the College’s art museum and an athletic playing field, close to works by Robert Indiana, Clement Meadmore, and Dan Graham.

Inspired by the curious conservation conundrum presented by this work, VoCA coordinated a Voice of the Artist program in which Acconci sat down with VoCA program committee member and Middlebury College alum Steven O’Banion to discuss the work and the reconstruction project in front of a small audience. After a brief introduction by VoCA’s Executive Director Lauren Shadford Breismeister, O’Banion began the interview by asking Acconci about Way Station I (Study Chamber) and its meaning. The artist told the assembled group about the conditions under which Way Station I (Study Chamber) was originally made, recounting how he had created it during a one-month residency at Middlebury where he also taught a class. As he recalled, the piece was built in about 5 days.

In contrast to his current working method, which includes the members of the Acconci Workshop, he didn’t have an established relationship with the two assistants who helped him implement Way Station I. Acconci ascribed flaws in the project to his mis-design, suggesting he felt that the resulting work was clunky, the concrete foundation too thick and the stair risers too high. There was an abundance of left over space. Now, he says he would have made changes to the interior space. 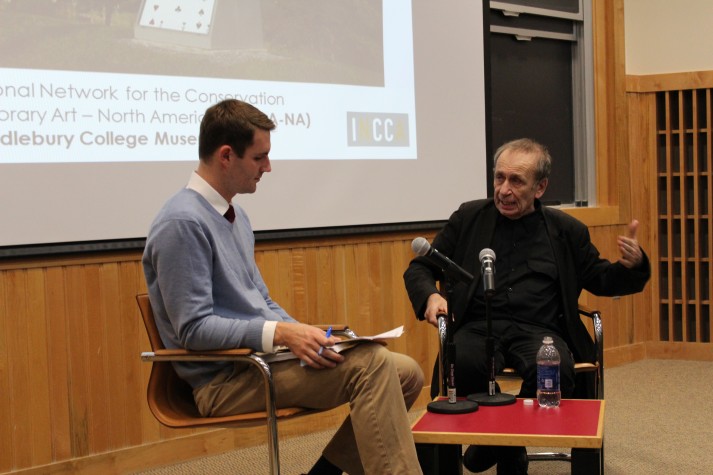 As far as the replica goes, Acconci said he had spoken with the person who drew the elevation for it, but not in any depth. Because the original was made to a different standard to the one to which he works now, Acconci admitted he was weary about the reconstruction and how it should be built. He also conceded that, too his mind, the location for the replica is like a sculpture garden, something that would have upset him in the 1980s, as back then he likened sculpture gardens to cemeteries.

Interestingly enough, Acconci now sees Way Station less as a sculpture and more as a piece of architecture, due to its makeup and functionality. However, he certainly didn’t feel this way when he made it. Back then, he was making installations in gallery or museum contexts, and most of his work had an element of participation. He wanted Way Station to fit into a space, yet question that space, suggesting that people should be able to use the work and therefore also be able to change it. “And architecture,” he said, “cannot be successful unless people can change it.” 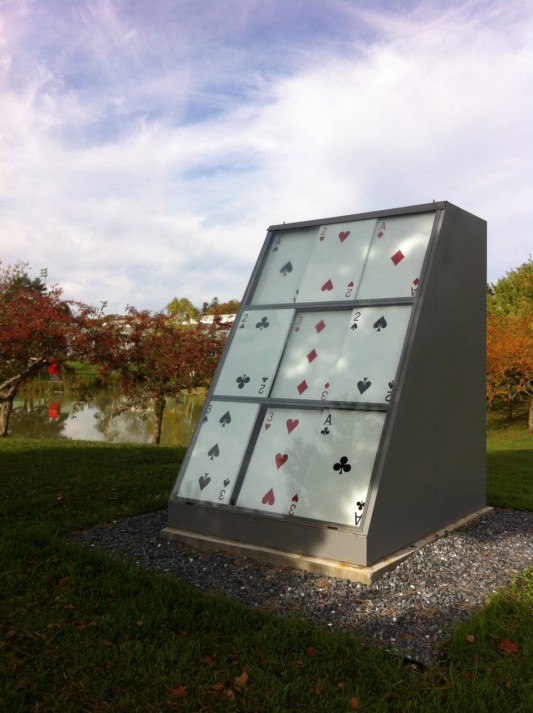 After he heard what had happened to the original piece, Acconci recalled thinking that whoever had tried to destroy it was either really angry or really naive because steel doesn’t burn. Far from being upset about it, Acconci felt that the destruction might have been a godsend, given that he didn’t think he’d done it right in the first place.  An audience member responding to this by observing that Acconci took the “way” of the original Way Station very seriously. Agreeing, Acconci indicated that it was his intent to create something that would invite contemplation, not to incite or attack.

When asked what he might make if he were invited to contribute a new work to the Middlebury campus, Acconci indicated that he wouldn’t be interested in creating another site specific piece. Now, he noted, he’s interested in observing the place rather than adding to it, studying how people use the space, where they congregate, and where they go to get away.