This week’s contributing writer, Alli Jessing, is a Programs Coordinator for the National Portrait Gallery and Smithsonian American Art Museum, working with film and media art. She holds an MFA in Film Studies from Boston University and currently serves as the Principle Investigator for the Smithsonian’s Time-Based Media and Digital Art Working Group.

The Smithsonian Institution Time-Based Media and Digital Art Working Group (TBMA) was founded in 2010 and is made of up curators, registrars, exhibits specialists, conservators, and program officers from all across the various branches of the Smithsonian Institution. We came together with a mission in mind: to develop long-term and comprehensive preservation strategies for time-based and digital art, and to establish a set of best practices for the acquisition, documentation, installation, and display of time-based art. 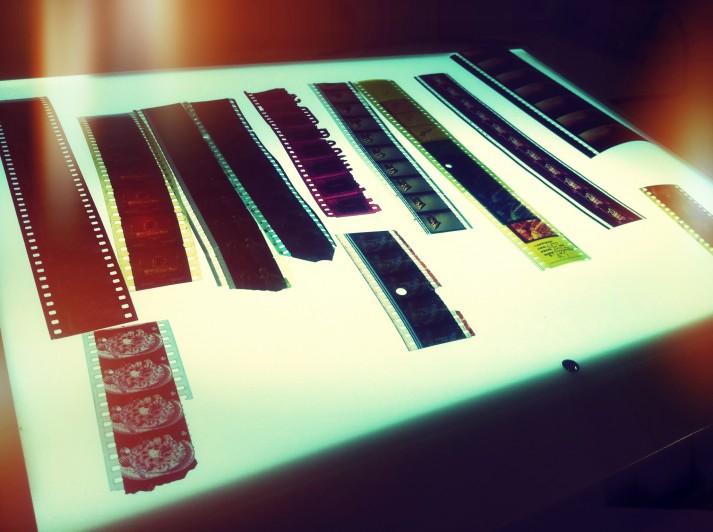 Segments of film reels and audiovisual equipment, as seen at the Library of Congress Packard Campus Facility

I am thrilled to announce the launch of the group’s new website. We hope that this site will both promote and communicate our group’s projects and initiatives while also fostering information-sharing with fellow institutions.

The site features several in-depth case studies of works in the Smithsonian collection, including Paul Sharit’s multi-projector film installation  Shutter Interface (1975), from the collection of the Hirshhorn Museum and Sculpture Garden, and a study of Lincoln Schatz’s 2008 generative portraits of nineteen leading American innovators, Portrait of the 21st Century, from the collection of the National Portrait Gallery. We plan to add more case studies as they become available.

The site also hosts an archive of the TBMA group’s past programs, including webcasts of the 2010 program that started it all, Collaborations in Conserving Time-Based Art, and our 2011 symposium, Collecting, Exhibiting, & Preserving Time-Based Media Art. One of our in-progress projects is the Report on the Status and Need for Technical Standards in the care of Time-Based Media and Digital Art. The final report on this project will be sourced from formal interviews with Thought Leaders in the field of time-based and digital media art preservation and will focus on the potential need for technical standards for the preservation of time-based media. Participants interviewed were asked Guided Questions developed by the TBMA Working Group. Participant lists, interview transcripts, and the final report are forthcoming and will be posted to the site upon wrap-up.

Another fantastic feature of the site is the External Resources section, which is divided into two parts: Major Projects and Categorized Resources. The site also links to reports on TBMA initiatives across the Smithsonian, including Collaborations in Conserving Time-Based Art Works, a product of the 2010 symposium, and Let’s Talk Digital: An Approach to Managing, Storing, and Preserving Time-Based Media Art Works.

Our hope is that this site will become a platform for information-sharing not only within the Smithsonian community, but within the greater community of practice. The site will grow from here, and we look forward to your feedback and participation.